Today is Susanna Clarke's birthday, so I thought it appropriate to repost the review I did of Jonathan Strange and Mr Norrell when it first came out. I loved that novel then, and I still love it -- it stands as one of the truly exceptional fantasies of the 21st Century. 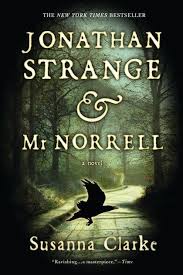 This novel has received a great deal of notice -- indeed hype. It has been called "Harry Potter for Adults", a rather unhelpful designation that reflects two things -- it shares a publisher with the Harry Potter books (Bloomsbury), and it does feature magic in something otherwise resembling the England we know. Neil Gaiman blurbed it as "unquestionably the finest English novel of the fantastic written in the last seventy years" -- a blurb that would be more defensible if the word "unquestionably" was omitted. One might perhaps conclude that this very fine book is indeed the finest English fantasy of the past 70 years, but I think one first would have to at least "question" the status of Tolkien and Peake -- to name the first two writers that leaped to my mind. Gaiman's 70 year period was evidently a nod to Hope Mirrlees's quite wonderful Lud-in-the-Mist -- a novel I do recommend people seek out.

I had earlier read a few of Clarke's short stories, those that appeared in the Starlight series of original anthologies. They were among my favorites stories in each of those book -- quite lovely and witty pieces. They are set in the same milieu as Jonathan Strange & Mr Norrell, but none of them are actually part of the novel.

As Jonathan Strange & Mr Norrell opens, we are introduced to a society of theoretical magicians based in Yorkshire. It seems that the practice of magic has disappeared from England in the previous couple of centuries. At one time magic was very common, and indeed the Northern part of England was ruled by a powerful magician, a boy raised in Fairie, called the Raven King or John Uskglass. The magicians who practiced during his 300 year reign were called "Aureate" magicians, and their successors "Argentine", but nothing remains of magical knowledge but a number of books of questionable authority, and occasional stories of the appearance of fairy roads and suchlike. Then a man named Mr Norrell makes a proposition to the Yorkshire society -- he will demonstrate to them that he is an actual magician. If he succeeds, they must all agree to renounce their claim to be magicians. Of course he does, quite spectacularly.

Mr Norrell, it transpires, wishes to revive the practice of English magic. But in a very limited way -- he seems to want no rivals. He buys up and hides as many reliable books of magic as he can find. He actively tries to suppress other magicians by such means as his deal with the Yorkshire society. And he is determined in particular to denigrate the memory of John Uskglass, and to avoid the Raven King's sort of magic and especially any dealings with fairies. However, he has some difficulty in getting an in with the powerful men of England -- to whom he hopes to offer his services. Only be bringing back the fiancé of one influential MP from the dead can he establish connections. And unfortunately he can only do that by dealing with a fairy -- and dealings with fairies are indeed dangerous.

Mr Norrell's bargain with the fairy works out very ill for the young lady he has revived, as well as for another couple of people. But other than that he is soon very successfully aiding the English side in the war against Buonaparte's France. Then another magician appears, a dilettantish young man named Jonathan Strange. Strange agrees to become Mr Norrell's pupil, but is soon chafing at Norrell's refusal to let him see many of his best books, and at his fears of dealing with fairies or studying John Uskglass. Strange also develops his independence by spending some years with Wellington in the Peninsula, aiding the Army by magic. After the war Strange breaks with Norrell, and threatens to publish a vast History of English Magic. But Norrell has his own ideas -- and more tragically, Strange's wife becomes a victim. The conclusion brings together, in a very satisfying way, Strange, Norrell, the enigmatic fairy that Norrell had summoned, the fairy's victims, Norrell's intriguing servant John Childermass, other magicians, and of course John Uskglass.

I found it completely delightful. Readers have noted its extreme length (about a third of a million words -- nearly 800 rather full pages). It is true that the plot moves slowly, and one can readily see ways that the book might be cut without losing the essentials of the story. But I don't think I would like it better cut. Clarke's witty voice is ever a delight, and I enjoyed all the meanderings. Her descriptions of magic are very effective -- there is a real sense of otherworldliness, of caprice, and too the effects are quite imaginative. Her characters, if perhaps a bit thin in places, are still interesting. For all the plot moves slowly, its resolution is as I said quite satisfying, and somewhat surprising. I was moved on occasion, laughing quite often, and never bored. (Which is not to say the novel is a fast or facile read -- it is easy to put down, but you will want to pick it up again. It is a book to live with for a few weeks, not to gulp down in a few sittings.) Jonathan Strange & Mr Norrell stands as my favorite novel of 2004.