Raymond F. Jones would have been 103 today. He's not much remembered these days, but he was an interesting writer of the Golden Age of Science Fiction. His career continued into the 1970s -- his last story appeared in Ted White's Fantastic in 1978.  In his memory I've compiled this set of reviews of his stories, that I wrote based on reading several old magazines in my collection. 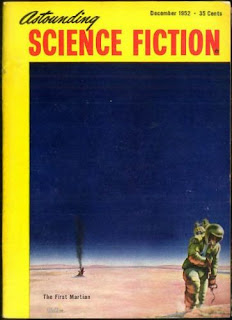 This is the first and best known of three stories Jones wrote featuring physicist Martin Nagle. In this story Nagle is recruited to join a project to investigate the claims of a young engineering graduate, Leon Dunning, that he has discovered anti-gravity. The discoverer was apparently universally regarded as an unpleasant crackpot. He finagles a demonstration with a government scientist, however, and the demonstration -- a film of which is shown to the members of the project -- shows him wearing his anti-grav belt and clearly levitating. Unfortunately, on a repeat of the demo, something malfunctions, and Dunning crashes and dies. Nagle and the others on his project are tasked with examining the limited remaining data Dunning left behind -- his library, a noisy videotape, his laboratory. One of the older scientists immediately proves that anti-gravity is impossible, according to established science, but the younger ones, Nagle in particular, are convinced by the demo that something must have happened, and somehow they manage to produce a crude reproduction of anti-gravity -- nothing like what Dunning had done, but still revolutionary.

Then comes the kicker -- and I won't reveal it, though you might guess. But it's pure, unadulterated, John W. Campbell wish-fulfillment. So I wasn't surprised to learn, via a post by Alec Nevala-Lee, author of the exceptional new book Astounding, a biography of Campbell as well as his top writers Heinlein, Asimov, and Hubbard, that the idea came from Campbell, and he pitched it first to Heinlein. Heinlein passed, and so Jones was the man who turned Campbell's idea into a story.

And you know what? Yes, the story is based on pure bunkum. But it works. And the ending -- even in its absurdity -- is really kind of inspiring. This is the essence, I think, of Campbell's force -- and of Raymond F. Jones's force, because, while Jones was never a great writer, he was an effective writer, and his stories, the best of them at least, are still worth a look. As the SF Encyclopedia puts it: "He was one of the carriers of the voice of sf."

By the way, the cover of that issue of Astounding, called "The First Martian" -- doesn't it look like it should have illustrated Theodore Sturgeon's great story "The Man Who Lost the Sea"?

John Boston tabbed Jones as a writer worth some attention, and I think this story, though it doesn't quite work, is indeed worth attention. Earth is setting up a star colonization program. We are first introduced to the military leader of an attempt to set up a beachhead colony, which has failed utterly. He is about to commit suicide in shame. We quickly cut to the head of the recruitment effort, who has yet to find a single colonist. It turns out he is running virtual reality simulations (or semi-VR, with staff members acting certain roles), and so far every colony has failed. The military insists that they should start colonies -- but the sim just run has proved that wrong. (The leader was stopped before his suicide and his memory of the test was wiped.) The recruiter has otherwise focussed on screening rebels and people with a reason to get away from Earth, similarly failing. Finally a man comes, a man with a good job and a secure life, who insists that he wants to be a colonist. The recruiter finally agrees to test him, though he's sure he'll fail. The test is difficult -- he faces sabotage, bad fellow colonists, the death of a child, and the resistance of his (acting) wife. But he persists. The point is that the best colonists won't necessarily be rebels -- doing so for "negative" reasons, or military personnel, doing so for "duty", but rather people of strong character, people who still care for Earth, but who have "positive" reasons to be colonists.

Some of the setup is hard to believe -- I couldn't really buy the practicality of simulating several years on an alien planet is what seems to be a few weeks. And as with other Jones stories, it's a bit didactic, and he tells rather than shows much of his point. And the point is a bit more obvious than he seems to think. But -- the story is still quite powerful, quite moving, and the odd love story concerning the psychologist who acts as the colonist's wife in the simulation is quite affecting.

Raymond F. Jones's "The School" has an interesting setup, and one of some interest to me as it deals with my own industry. It opens with the demonstration of a new superbomber by Firestone Aviation (apparently meant to be Boeing -- my own company -- at least based on its Seattle location). The bomber seems to be a success, but the chief engineer abruptly gives his notice. He's disgusted with himself -- planes are just getting bigger and more complicated -- not smarter. (Shades of Clarke's "Superiority".) He declares that he is heading off to a radical new school -- to unlearn all the things he was taught in school. The protagonist is the Air Force liaison, who is tasked to try to get into the same school -- to find out why so many of the top engineers (at other companies too) are quitting. Once he is there we get some lectures about how schools are instruments of enforcing cultural conformity, and of putting the brakes on real originality. It doesn't really work as a story -- too many lectures, things go too easily. The ideas are -- well, they're exactly up Campbell's alley, it seems to me. And they are not entirely absurd -- to some extent schools do enforce cultural standards. But at the same time they are presented too dogmatically, and too many assumptions ("all math teachers are bores who suck the interest out of the subject", etc. etc.) are taken as given.

The opening novelet is by Raymond F. Jones, who had a long career in the field (first story published in 1941, last in 1978), but who never really became prominent. He did publish some stories that garnered attention, perhaps these days most notably the novel This Island Earth, which became a movie. "The Gift of the Gods" is a noticeably dark story -- an alien spaceship crashes in the Atlantic, and the US recovers it, but is pressured to allow equal access to the Russians and to other countries. Physicist Clark Jackson is recruited to be part of the US scientific team, partly because one of his college classmates is the General in charge. Problem is, Jackson hates the General, because he blames him for stealing the only girl he ever got up the courage to ask out. And Jackson also hates the General’s views: he wants the alien tech for weapons development, and he also wants to keep all that knowledge from the other nations. Jackson soon realizes that this attitude is held by all the other investigators, and finds himself eventually allied with the horrified alien representative. The conclusion is cynical and dark. It’s to some extent an interesting effort, but it doesn’t really work: it’s a bit overblown and unconvincing -- in particular, the characters come off as cardboard types.

Finally there is Raymond F. Jones' "The Memory of Mars". Mel Hastings is a journalist, and his wife is dying. She insists, however, that they once went on a trip to Mars. But Mel has no such memory -- and he also has a desperate fear of spaceflight. But he regrets not being able to indulge her desire for a "return" trip -- then, after he dies, he learns to his shock that she doesn't seem to be human. I admit, as a regular SF reader, I immediately assumed she'd turn out to have been Martian, somehow having replaced his real wife during the trip to Mars, during which Mel would have been treated to forget. That's not quite what's going on, though -- the resolution is far more complicated, and a bit strange, involving Mel getting treatment to deal with his space fright, which leads to him recalling his and Alice's trip, and realizing something very odd indeed happened. I think in the end the story is overly complicated, wrapped around a familiar idea, but I did want to know what was going on all along. Not great at all, but intriguing in its way.