Neal Stephenson was born on my first Halloween -- October 31, 1959, when I was all of 26 days old. In honor of his birthday, then, here are two reviews I did long ago, of his novels Quicksilver and Cryptonomicon.

What to say about Neal Stephenson's Quicksilver (first of The Baroque Trilogy) that has not already been said? It is largely as has been reported: overlong, rambling, annoying anachronistic, not terribly well plotted. Yet for all that I rather liked it. I certainly didn't love it, and it is by no means as good as Cryptonomicon or Snow Crash, but it is a generally enjoyable and interesting hodgepodge of political intrigue, early scientific inquiry, disease and grime, and eccentricity. For a negative review with which I almost entirely agree in specifics, I suggest Adam Roberts's. All I can say is that I have little objection to Roberts's arguments, but that I came away from the book having enjoyed myself. 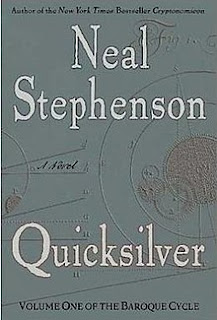 The story is told in three long books. (The entire novel is some 380,000 words, so each book is a substantial novel-length in itself. And of course Quicksilver is only the first of a trilogy!) The first book is about Daniel Waterhouse and his relationship with Isaac Newton. Waterhouse is one of a prominent Puritan family, who have wielded some influence during Cromwell's Protectorship. But the story really takes place as Waterhouse goes up to Cambridge, just after the Restoration of the Monarchy. Daniel's loyalties are divided -- he is still his father's son, but hardly a true believer in the Puritan religious doctrines. At Cambridge he befriends the very strange and otherworldly Isaac Newton. Daniel himself is presented as a competent natural philosopher but nothing special -- he is there as a witness to genius embodied by Newton (and others such as Hooke, Huygens, and Leibniz). Daniel becomes a minor political player, Secretary of the Royal Society, sort of a tame Puritan in the Royal cabinet. This section is told on two timelines -- one following Daniel from youth to near middle-age, the other a rather pointless account of Daniel beginning a much later (1714) journey back from Massachusetts (where he seems to have founded MIT) to London in order to testify in a dispute between Newton and Leibniz about the invention of the calculus. This last thread is, I think, a complete mistake -- it does absolutely nothing for the current book. I am sure it will be picked up in later books, and probably be important, but it's just so many wasted pages here.

The second book abandons Daniel entirely to tell the story of two rather lower-class individuals. Jack Shaftoe (the names Shaftoe and Waterhouse will of course be familiar to readers of Cryptonomicon) is a Vagabond -- at first an orphaned boy making a living by jumping on the legs of hanged men to hasten their death and reduce their agony, later a rather lazy mercenary fighting in various wars on the continent. He comes to Vienna, under siege by the Ottomans, and by happenstance manages to rescue a beautiful virgin named Eliza, a native of Qwlghm (a fictional island off the coast of England also from Cryptonomicon). Eliza had been kidnapped from the shores of Qwlghm and sold to the Ottoman Sultan, who fortunately was preserving her to be a gift to one of his generals after the presumed success of the Vienna campaign. Eliza's experience has given her one consuming passion -- the eradication of slavery. Jack (who is nicknamed Half-Cocked Jack due to an unfortunate earlier surgical procedure -- hence Eliza's virginity is safe from him -- though they find other ways to have a good time) and Eliza wander back across Europe to the Netherlands, meeting Leibniz along the way and having a variety of adventures. Finally Eliza is established in Amsterdam, becoming a financial genius and a spy for William of Orange, while Jack makes his way to Paris and eventually to a seat as a galley slave.

The third book switches between Eliza and Daniel, and in this book there is a somewhat coherent plot. Basically, by now the book becomes the story (told from an unusual angle) of England's Glorious Revolution, when William of Orange and his wife Mary take the crown of England from the hated Catholic James II. Eliza's role takes her to Versailles where we see the court of the Sun King, while Daniel plots against James from within his cabinet. The book ends more or less with the successful conclusion of the Glorious Revolution.

As I say above -- there is much wrong with this book. It is too long. Though I was never precisely bored I was often not particularly concerned as to when I would next pick up the book. (It took me the entire month of March to read it.) It is full of very jarring anachronisms, mostly in the speech of the characters. (The events and devices described are as far as I know all essentially real, except for the irruptions of the long-lived alchemist Enoch Root.) Stephenson has defended this by claiming the book is written for 21st Century readers -- if so, then why the absurd spelling tics, such as phanatique for fanatic? In the end the anachronisms simply annoyed me, pulled me out of the book. The overall plot, to the extent I could detect one, is hardly advanced at all in this book, though I think an argument can be made that there is a significant plot thread (taking us from the Restoration to the Glorious Revolution) that is resolved in this book and works fairly well. The characters are to some extent grotesques but mostly interesting grotesques -- they are, I suppose, the main reason I ended up liking the book on balance.

(And all that said, for a book set in the same time period, I recommend much more highly William Makepeace Thackeray's Henry Esmond.)

Neal Stephenson's Cryptonomicon is a huge book (about 425000 words). It's not really SF, though it hovers on the edge of being SF.  It's a very absorbing book, and a fascinating book.  Also, its strengths are those that lend themselves to a long novel: it is continually interesting, on the one hand; and on the other hand the plot is a minor source of the interest.  Thus there aren't boring parts that you have to wade through to get to the end: and getting to the end isn't as much the "goal".

It's told on two timelines.  One is set during World War II.  Two main characters are followed in this thread: Lawrence Pritchard Waterhouse, a math genius and friend of Alan Turing who ends up assigned to the joint US/British codebreaking effort; and Bobby Shaftoe, a Marine who ends up assigned to a unit Waterhouse deems necessary: a unit which will fake evidence that the Allies had other means than codebreaking to allow them to achieve some of the successes they really achieved because they could read the Axis codes.  Thus the Germans and Japanese hopefully won't change their codes.  For some time this thread deals with the codebreaking end of things, but after a while interest begins to focus on a scheme by the Germans and Japanese to hide a bunch of gold in secure caches in the Philippines and elsewhere.  This introduces a couple more viewpoint characters: Japanese engineer Goto Dengo, German U boat captain Gunter Bischoff, and another member of Bobby Shaftoe's special unit, the Australian priest Enoch Root.

The other thread is present-day.  Lawrence Pritchard Waterhouse' grandson, Randy Waterhouse, is part of a startup company trying to establish a "data haven" in a small island country in the Pacific.  This work takes him to Manila, where he meets Bobby Shaftoe's granddaughter, America (Amy) Shaftoe.  (Neither Bobby Shaftoe or Lawrence Waterhouse ever revealed to their children what they did during the War, so Randy and Amy have no idea that their grandfathers knew each other.)  Randy's efforts brush him against some organized criminals.  Also, they find something interesting in Manila Bay while laying cable, something which Randy recognizes as having to do with his grandfather.  Soon he is involved in a race to find one of the caches of Axis gold, and his success may depend on breaking a code his grandfather couldn't break.

All this is a fairly fascinating story by itself, with lots of action and heroism, but what makes the book really work is the clever stuff Stephenson does with infodumps.  He tells us about Unix systems, cryptanalysis, eating Cap'n Crunch properly, proper computer security, mining engineering, cannibals on New Guinea, Douglas MacArthur's relationship with the Marines, computer games, Japanese atrocities during the War, and much more.  And he's a very funny writer as well.  For example, he has an extended joke about an obscure (i.e., nonexistent in our history) set of islands belonging to the UK, with a language all their own, such that, for instance, Smith is spelled cCmmcdn, or something.  Of course this is relevant to cryptography.  But it's also very funny.  The characters are involving, if perhaps just a bit on the bestsellerish side: that is, they are a bit on the supercompetent side (though also with real weaknesses).  I really really enjoyed this book.  I'm not sure whether to nominate it for a Hugo, though: it's definitely one of the 5 best books I've read from 1999, but is it close enough to SF?
Posted by Rich Horton at 4:53 PM