Today is Catherine Asaro's birthday, and so I have resurrected this review I did when it first came out of The Last Hawk. 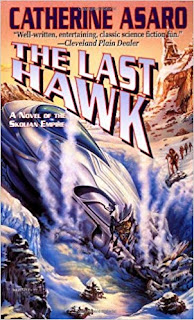 Catherine Asaro's latest Skolian novel is The Last Hawk. This takes place roughly at the same time as the action of her first novel, Primary Inversion, but on a completely isolated planet. The Skolian connection is that the protagonist, Kelric, is a member of the Ruby Dynasty, ruling family of the Skolian empire. He crash-lands on an isolated, restricted, planet, Coba, and becomes a pawn in an extended power struggle.

The novel is really concerned with the social and political setup on this planet. The society of this planet is female dominated, and a powerful male like Kelric is a threat, both to the societal structure, and to the political independence: this last because if he is found by the Skolians, the restricted label is likely to vanish, and Coba will be absorbed into the Empire.

There are other key aspects to the social structure: Coba is dominated by a number of Houses, each with a female head. The planet has replaced war with a game called Quis. Each House has some first rate Quis players: the Head of the house, and members of her household, especially including her "husbands" (or "akasi"s). Information is transmitted by Quis playing, and very good players can influence "public opinion" by innovative playing. I found this concept fascinating, though in the end quite unconvincing. An important aspect of this is that a Calani (male Quis player) from one household is very valuable to another household, because of his "inside knowledge", as it were, and a certain flexibility he seems to gain from being exposed to different styles of Quis. Thus these Calani become, essentially, prize commodities, tradable for money or political favors.

[Some of the following may include spoilers, though I don't think they are too bad. The spoilerphobic, however, may disagree. I'll mention briefly, then, that I liked the book, and I recommend it.]

After his crash, Kelric is rescued by a team from the leading allied house to the "ruling" house. Kelric, damaged and also unable to tolerate some of the local chemistry, barely survives. Soon, however, he has "married" the head of Dahl house (the house which found him), and he has met the heir apparent to the ruling House. Despite his emotional ties, he eventually tries to escape, and accidentally kills someone, as a result ending up in prison. However, he has two important things on his side: he is a natural genius at Quis (helped somewhat by his Skolian biomechanical enhancements); and he is very sexy, and the powerful women of the Houses tend to fall in love with him. The story follows him through a variety of Houses, as for political and other reasons he becomes a very rare Calani of six houses. However, the disruptions his presence causes begin to threaten the structure of Coban society.

This is an interesting novel, with much to recommend it, and very readable. I had problems with couple of things: the ultimate improbability of Quis is one, including the improbably sudden scientific advances supposedly resulting from Kelric transmitting ideas from Skolian culture to the Cobans via Quis. Also, a couple of villains who were almost too bad (though Asaro really tries hard to make them plausible and close to sympathetic), and I had a certain difficulty in staying emotionally involved with Kelric's many romances and quasi-romances. Kelric's amazing Quis ability was a bit of a cliché (though to be fair, Asaro provides at least some justification for it, in the form of his bio-mechanical enhancements), and the actions of some of the characters at times seemed to be designed to advance the plot rather than to arise from their own characteristics. The female-dominated society was quite well handled, I thought. Sometimes Asaro was too clearly engaging in allegory though, having the Coban women, generally good people, casually treat their men in blatantly sexist ways: all this seemed obviously a reversal of male sexism in our society: a fairly effective device for the most part, but a bit too pat and obvious in places. The novel's structure, in six parts corresponding to the six Houses of which Kelric becomes a member, allows Asaro to explore Coban society from many angles: some of the Houses are traditional, some modern, some strong, some weak: so we get a fairly varied look at the planet and society. That said, I didn't get a strong sense of a "complete" planet: rather, the society seemed to consist of smallish, isolated, enclaves.

Asaro has become known as a sort of hybrid SF/Romance writer. Her books are published by an SF imprint, and certainly widely read by SF readers, but she also gets reviewed in Romance-oriented publications, and as I recall she has won an award from a Romance organization. Her first two novels seemed on occasion to suffer from this dichotomy, as SF expectations were not necessarily satisfied, and possibly vice-versa. (I'm thinking in particular of Primary Inversion, which ends when the romance plot has been more or less resolved, but well before the SF/Adventure plot has been resolved. (I understand a direct sequel is forthcoming.)) The Last Hawk works very well as an SF novel, but might disappoint romance readers. Read as a romance, certain expectations are set up, and then (perhaps deliberately?) subverted. In fact, Asaro seems almost to be playing with Romance novel conventions: she has several romantic entanglements to work with, and they seem almost to be comments on typical relationship-types.

When I originally finished this book, I thought "Fast, fun, read. Some nice ideas. Not quite successful." Over the weeks since I've read it, it has improved in memory. Even if I found the basic idea of Quis unbelievable, it is a clever idea, and moreover one which works very well thematically. Also, I believe some of my original mild disappointment was related to a what I mention above: the failure of the novel to conform to typical Romance plot expectations. But on reflection, this is a strength, and not a weakness. I feel sure, too, that this novel plants a charge waiting to be detonated later in the Skolian series, whenever Coba confronts the Universe at large.
Posted by Rich Horton at 7:09 PM