I've already posted a review for Neal Barrett's birthday, but I had another one in my archives. This review appeared in Black Gate, I think, one of the early print issues. I figure I'd resurrect it as well.

Sometimes an idea seems to suddenly become fashionable, and it pops up in several places almost simultaneously. In an earlier issue of Black Gate I reviewed Will Shetterly's Chimera, which is largely about animal/human genetic hybrids. Richard Calder's 1998 novel, Frenzetta is also about animal/human hybrids. In Chimera the main hybrid character is a jaguar person, while in Frenzetta it's a rat person. Here now is The Prophecy Machine by Neal Barrett Jr., again featuring animal/human hybrids, in this case with a "Mycer" (uplifted mouse) as the main female character. (One might speculate on what it means that in each of these novels the viewpoint character is (more or less, in the case of Frenzetta) a fully human male, while the animal/human hybrid is a female who is or becomes the viewpoint character's lover. Perhaps it means no more than "all of the authors mentioned are male".) (In this context I might also mention the distant sequel to Frenzetta, Malignos, which features a human male/goblin female relationship, a relationship which for some reason reminded me strongly of the relationship at the center of The Prophecy Machine.) 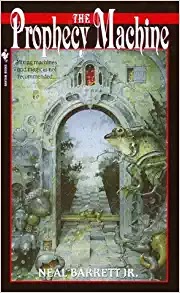 The Prophecy Machine opens with a Master Lizard Maker named Finn on a ship, taking a vacation with his wife, the "Mycer" Letitia Louise, and with an intelligent mechanical lizard named Julia Jessica Slag, an illegal creation of Finn's . Things have already gone bad, as the ship is crewed by "Yowlies" (uplifted cats), and Letitia Louise can't stand them, for obvious reasons. Things take several turns for the worse when Finn arouses the enmity of a fellow passenger who is abusing a Foxer servant, and then when Finn, Letitia Louise, and Julia are marooned in the strange country of Makasar, unfortunately also the home of Sabatino Nucci, the strange man whose enmity Finn had aroused on the ship.

Makasar is a strange place indeed. The inhabitants have a strict taboo against hospitality of any sort, which makes it hard for our heroes to find a place to stay. They also practice two strange, violent religions: the Hatters rule the day, and the Hooters rule the night. Both sects act in unusual ways, and seem to make a habit of burning and killing, for ritual or other reasons. When Finn comes to the rescue of a person the Hatters seem ready to kill, he finds that this is Sabatino Nucci's father, and despite their mutual antipathy, Finn ends up staying at the Nuccis' strange house, as he has no alternative.

Despite an almost light-hearted and playful tone, the book is full of grotesque and terrifying incidents and features: the Nuccis' bat-derived servant and their horrible food (such as turnip wine); the mad old man who seems to also be staying with the Nuccis; the constant threat of attack from almost any corner: if one of the Nuccis isn't threatening Finn and his companions, then the prejudiced citizens of Makasar, or bands of Foxers, or Sabatino's uncle Dr. Nicoretti are after him. Not to mention the ghosts he meets, nor the stress caused by Letitia Louise's oscillating moods, nor the acerbic banter with Julia Jessica Slagg. But the worst thing of all is the strange, almost living, machine in the bowels of the Nucci's house: a machine Nucci's father calls "The Prophecy Machine". This machine makes anyone who comes near it ill, and it seems to distort time, and it seems to be growing and growing, taking over the house.

This is a colourful story, full of unusual and imaginative bits. Though much of the story has a rather claustrophobic feel, it remains a good read, with a rousing conclusion, and the main characters are quite engaging. For all that, it's not as ambitious or as satisfying as the best of Neal Barrett's short work, such as "Stairs" and "Cush" and "Ginny Sweethips' Flying Circus". It presents the idea of "enhanced animals", and shows the prejudice of "regular" humans against them, but that's just background. (Though Finn's character and feelings are very well-portrayed, particularly with regard to his love for Letitia Louise.) The strange society in Makasar is likewise presented and wondered at, but never explained or really explored. The central story is fun, but just a story. The Prophecy Machine is an enjoyable novel, but it's Neal Barrett Jr. at no more than half-throttle.
Posted by Rich Horton at 9:38 PM