Today is the birthday of Jeffrey Ford, and in his honor, here is a compilation of many (not all) of my reviews of his short fiction, mostly from Locus.

And "The Weight of Words" (Leviathan 3), by Jeffrey Ford, suggests that the placement and appearance of words can affect their meaning in such mundane ways as subliminal advertising, or such more profound ways as causing death, love, or the appreciation of beauty.  Told by a man who has lost his wife and hopes to regain her, but gains something else, it's a lovely story.

The February 26th story at Sci Fiction, "The Empire of Ice Cream", by Jeffrey Ford, is excellent. My interest was immediately engaged by the Wallace Stevens reference, but the story itself fully rewards reading. It's about a man with synesthaesia. He is brought up quite sheltered by older parents, never really making friends with other children, due to his synesthetic hallucinations. He becomes an accomplished piano player and composer, even as he perceives the notes he plays or composes as sights or smells or tastes. As a teenager, a chance encounter with coffee ice cream changes his life -- the hallucination this flavor brings forth is different than any other: a young woman. As he grows older, he finds that pure coffee allows real contact with this woman, and he learns that she, too, is an artist and a synesthaesiac. The story climaxes as he tries to complete a major musical composition -- coming to a predictable but still quite satisfying and moving conclusion.

One very intriguing debut publication is Argosy, a magazine launched at least somewhat in the tradition of the early 20th Century magazine of that name, in that it will feature a "catholic" array of stories -- stories from all genres.  Jeffrey Ford's "A Night at the Tropics", is about a cursed chess set and the bully who stumbles into possession of it. The story is framed in a very Kiplingesque manner: the narrator, named Ford, tells of his return to his childhood house, and a visit to a bar his father frequented, "The Tropics". It is there that he again encounters the bully, and hears the tale of the chess set. And, much as Kipling so often and so brilliantly managed, the frame ends up blending with and enhancing the central story.

Jeffrey Ford's "A Man of Light" (Sci Fiction, January 26) is a rather gothic story about a young reporter interviewing a man who has made a fortune creating spectacular illusions by manipulating light in implausible ways. But he reveals to his interviewer other obsessions -- a desire to actually communicate with light, and a fear of light's opposite, "the creature of night". The story spirals into strange dreams, murders, and an inevitable, phantasmagoric, ending.

Locus, December 2005 (review of The Cosmology of the Wider World) 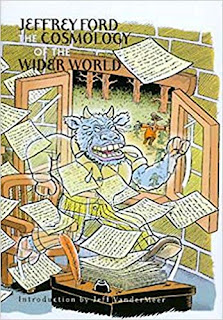 Jeffrey Ford is among the most original of contemporary fantasists. A consistent delight. His recent novels (The Portrait of Mrs. Charbuque and The Girl in the Glass) have been urban fantasies set in the relatively recent past. His earlier novels -- the Physiognomist Cley trilogy and his little-known first novel Vanitas -- featured decidedly odder settings. Now we see The Cosmology of the Wider World, a PS Publishing "novella" (though it is actually of novel length): something of a return to the style of those earlier books. (Indeed I detected an explicit reference to Vanitas.)

Belius is a minotaur. He lives in a "crenellated tower of his own construction", and he is writing a book called "The Cosmology of the Wider World". His closest friend is a philandering sea turtle named Pezimote. And Belius is depressed -- he feels he has been poisoned. His book is worthless. So his friends decide to look for a cure.

At first blush this seems almost a traditional "talking animals" book. We learn of Belius’s birth, to a human couple, and of his lonely upbringing and his eventual realization that the human world was not for him. (Particularly after terrible disappointment in love.) Thus he makes his way to the fabled "Wider World", where the animals talk, and he builds his tower and works on his "Cosmology". In a more conventional book, we might hope that he will eventually return to the human world and rediscover his love, or perhaps find love in the Wider World. But Ford’s imagination is simply too strange for this.

Indeed his friends see hope for a cure in finding him a lover. But their attempts in this direction are both comic and sad. Meanwhile Shebeb the healer ape has his own ideas as to how best to cure Belius, including a Fantastic Voyage-like journey by a talking flea. The final direction of the book is quite unexpected.

The book is a great deal of fun, and at the same time quite moving. Belius is a convincing and sad character. The prose is typical of Ford at his more extravagant -- always interesting, though at times not quite precise. (For example, in the opening sentence he writes "fizzing like quinine", but it is not quinine that fizzes, rather quinine-flavored tonic water.) Still, Ford’s prosodic leaps are more often delights than missteps. And this book as a whole is fabulous in multiple senses of the word. 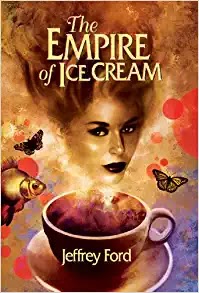 Jeffrey Ford is one of the most original and fascinating writers in contemporary fantasy. The Empire of Ice Cream is his second story collection. His novels have attracted considerable well-deserved interest, including a World Fantasy Award, but for my money his short fiction is better still. The title story is one of my favorite stories by anyone from the last few years. The story is about a man, a composer, with synesthesia. Coffee ice cream causes him to conjure a young woman who is also an artist and a synesthesiac. The story comes to a predictable but still quite satisfying and moving conclusion. "The Weight of Words" suggests that the placement and appearance of words can affect their meaning in such mundane ways as subliminal advertising, or such more profound ways as causing death, love, or the appreciation of beauty. Inevitably, but not at all in the ordinary way, these techniques are used in love letters. There is one new story in the book, a very long novella (nearly novel length): "Botch Town". This is a sad and precise evocation of childhood in a lower middle class suburb. The title refers to a model town that the narrator's brother constructs in their basement. Their sister, who is in some way brilliant but not very comprehensible, seems to use this town to follow real happenings in their own town, including the whereabouts of a mysterious visitor who may be connected with the disappearance of a neighborhood boy.  "Giant Land" may be less well known but it too is wonderful, about a woman and a boat and giants ... too hard to describe in brief! There are many other jewels here -- the stories are a varied and intriguing lot. Ford's brief introductions are a definite plus as well. This is surely one of the best story collections of 2006.

Jeffrey Ford’s "The Dreaming Wind" (The Coyote Road) is an offbeat and lyrical tale of a town where, towards the end of summer each year, a wind blows through, leading to bizarre changes in people who are caught out in it. But one year the wind doesn’t come at all. As a result, apparently, the townspeople lose their ability to dream, and this is a sad thing. There is a solution, and an explanation, quite sweetly and originally unveiled.

One story truly stands out in Ellen Datlow's The Del Rey Book of Science Fiction: Jeffrey Ford’s "Daltharee", a dizzying fantasia about a "bottled city" created by a mad scientist: a tiny creation (resembling a large snow globe perhaps?) inhabited by living people. Ford makes the city and its people real, and also the rather disturbed creator, and takes everything in a nicely dark direction.

In the Datlow/Windling anthology Salon Fantastique, Jeffrey Ford’s "The Night Whiskey" is spookily offbeat, about a small town where one night a year a few people are privileged to drink the title draft, a distillation of the "deathberry", which allows communication with the dead. The story begins as just odd -- almost goofy -- but modulates to darkness when one man tries to bring back his lost wife via the whiskey.

Finally, John Joseph Adams' The Mad Scientist's Guide to World Domination closes with a series of darker stories, of which the best is Jeffrey Ford's "The Pittsburgh Technology", in which a nebbish, after meeting a suddenly successful man he used to torment, tries the title process under the promise that it will transform his life, only to learn that some losers are destined to remain losers.