Review: The Once and Future Witches, by Alix E. Harrow

I notice that I haven't made a post here in almost two months. That wasn't the plan, but things happened. I'm going to try to be a more regulat poster.

The Once and Future Witches, by Alix E. Harrow 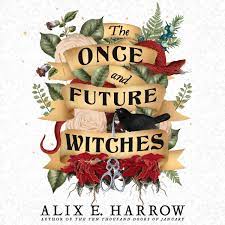 My latest in a long series of reviews of books I heard, rather than read, is The Once and Future Witches, by Alix E. Harrow. Harrow has been publishing short fiction since 2014, and she came to my notice with her Hugo winning short story from 2018, "A Witch's Guide to Escape: A Practical Compendium of Portal Fantasies". Her first novel was The Ten Thousand Doors of January in 2019, and The Once and Future Witches, published a year ago as I write, was her second. It won the 2021 British Fantasy Award for Best Novel.

The novel is set in 1893, in an alternate history in which witchery is real, but has been brutally suppressed over and over again (mostly by men, and often, we eventually learn, but what seems to be the same, nearly immortal, man.) Though it eventually becomes clear that both men and women can do magic, this history assigns most of it to women, including things like collection of fairy tales (by the Sisters Grimm and Charlotte Perrault and Andrea Lang, for example -- and Alexandra Pope is the name of a famous translator of Homer.) Likewise history is altered in curious ways -- the witch burnings in Salem, for example, happened about a century later than in our history, and the Triangle Shirtwaist Fire becomes the Square Shirtwaist Fire and happens a couple of decades early. I could see the motivation for most of these changes (some, I suspect, just for fun) but I'm not surely they really worked -- at any rate, they nagged at me as artificial. More successful are the reimagined fairly tales intertwined with the main line of the story -- these interrogate the assumptions and intentions of traditional fairy stories effectively, and also work nicely to advance the plot (and back story) of the book.

The story here concerns three sisters: Beatrice Belladonna, Agnes Amaranth, and James Juniper. They grew up in the backwoods, and their mother died young. They were raised by an abusive father, and by their grandmother, who taught them "witch ways" -- little magics, sometimes bigger magics, done in secret by women. The three are separated as the action starts, and each blames the others: Beatrice and Agnes both abandoned the much younger James when she was 11 or so, after a mysterious fire nearly killed their father and injured James Juniper. It's clear to the reader that none of the girls had much choice in the actions they took, and that their mistrust of each other is misplaced, but that mistrust drives the early action importantly. As the book opens, their father has died, and James Juniper, her home given to a male cousin, has fled to the city, to New Salem (while being suspected of having murdered her father.) New Salem (actually location never really given) was built, apparently, to replace the old town of Salem, which was burned to the ground to wipe out all traces of witchcraft, and to kill the remaining witches. As James comes to the city, she is drawn to its center, and so are her sisters, who have lived in the city for a while. (Beatrice is a librarian, and Agnes works in a mill.) As the three come together, a sudden storm reveals a mysterious tower -- the Tower of Avalon -- and it is clear to everyone, hopeful witches and suspicious moralists, that magic in some form has returned.

New Salem, we learn, has been explicitly recast as a highly moralistic city, and witchcraft is illegal, and all but unknown (at least, openly.) It is also the home of a nascent movement for women's suffrage. In something of a reaction to this, the upcoming mayoral race features a reform-minded opponent, Gideon Hill, a slimy man who urges severe opposition to both women's suffrage and any trace of witchcraft.

The three sisters represent a version of the traditional maiden, mother, crone. James Juniper, the youngest, the wild girl, is the maiden; Agnes, pregnant out of wedlock, and the most traditionally beautiful, is the mother, and Beatrice, the eldest, and a Lesbian, is the crone. But these cliched roles are also questioned and examined, and each is given fuller agency than in traditional stories. Soon they are -- if somewhat tentatively -- working together. James Juniper joins the suffragist society, but quickly realizes they are somewhat hidebound, very cautious (especially about any hint of witchery), and racist to boot. The sisters form a new society, explicitly looking to restore witchcraft, at first by resurrecting, from old stories and oral traditions, as many spells (witch ways) as possible, eventually be seeking to restore the Tower of Avalon. Meanwhile Agnes is trying to find a way to keep her coming daughter safe, and to give her a chance at an independent life; while Beatrice is forging a tentative relationship with Cleopatra Quinn, a black journalist from New Cairo, the black neighborhood of New Salem. And Gideon Hill -- who, it is clear to readers from the jump, has his own dark magical abilities -- is trying to capture them and destroy them.

The novel gains momentum quickly. There are actually three climaxes, each very powerful, each of which brought tears to my eyes. The magic is convincingly and imaginatively described. There are truly wrenching sacrifices that must be made, which are not shied away from. The back story of the sisters in interesting and well revealed, and the back story of some other characters, Gideon Hill in particular, is also intriguing. I will say I didn't quite find James Juniper's character to come to life as fully as her two sisters; and Agnes' eventual love interest seems a bit convenient. The novel makes a brave attempt to engage with racial issues, and also LGBTQ+ issues -- sometimes this aspect seems a bit sketched in, a bit forced. (Though necessary to acknowledge.) All these are quibbles (and so too is my feeling that the denouement is somewhat of a letdown) -- for the most part The Once and Future Witches is exciting, tremendously moving, and earns its ending.