Birthday Review: How Like a God and Doors of Death and Life, by Brenda W. Clough

Birthday Review: How Like a God and Doors of Death and Life, by Brenda W. Clough 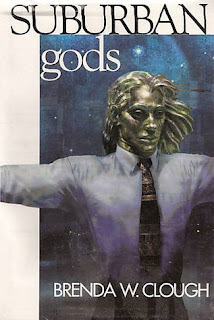 I read Brenda Clough's "Gilgamesh" books, How Like a God (1997), and Doors of Death and Life (2000), in an omnibus edition from the SFBC, called Suburban Gods.  Brenda calls them "suburban fantasy", and indeed they depict suburban life pretty well: home improvement, day care, commuting, minivans, even believable contemporary American Christians (a rarity in SF!).  For that alone these are refreshing books.

How Like a God concerns Washington area software developer Rob Lewis, the father of 18 month old twins, and the loving husband of Julianne, who works in the fashion industry.  One day he suddenly realizes that he has an unusual power: he can read minds, the minds of anybody on the planet, and he can control people.  After a few mild experiments, he tells his wife, and her response appals him.  She wants him to influence her employers to help her career, and then she wants him to look for great personal power: run for President, perhaps.  Horrified, he makes Julianne forget everything, but soon her realizes that he can't control his power, and that he is altering his twins unconcsiously, making them act extra mature without even knowing it.  In despair, he runs away to New York City and spends months as a homeless man, using his power occasionally to cadge meals and housing.  His humanity begins to slip away from him, and suddenly he realizes that he is becoming a monster.  When he finds himself about to rape a teenage girl (by making her want it), he starts to break out, and looks for help.  His only help is from a chance encounter with an NIH microbiologist, Edwin Barbarossa, a fundamentally good man at a very deep level.  The rest of the book follows Rob's gradual return to humanity with Edwin's guidance, and also Rob's eventual encounter with the mysterious and surprising source of his power. 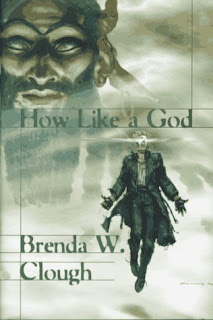 This is a very fine book, quite original in conception, and dealing pretty unflinchingly with the issue of personal responsibility, and how important and difficult that is when you have immense power.  The book's only real weakness is the character of Julianne, who is neither terribly likeable, nor particularly three-dimensional, but she's a fairly minor character and that doesn't really hurt the book too much.

Doors of Death and Life, the  sequel, is still an enjoyable read, taking on some loose ends from the first book.  However, it's not as good, and overall it's a bit disappointing.  The plot is fairly disjointed, and some key issues are resolved rather abruptly.  I'll continue after warning that naturally there might be spoilers for How Like a God in my discussion of Doors of Death and Life.

Doors of Death and Life is set in about 2002, 7 years after How Like a God.  It becomes clear that this is an alternate history, sort of.  Dan Quayle was apparently elected President in 1996, for instance, and more significantly, a semi-privatized space effort has resulted in a new moonbase. 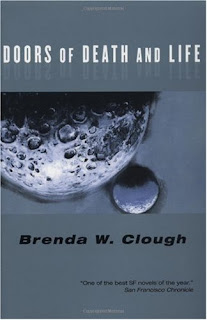 Rob still hasn't told Julianne about his powers.  He has told Edwin, and Edwin's wife Carina.  Edwin is spending several months at the moonbase. In How Like a God, it's been revealed that Rob got his powers from Gilgamesh, the supposedly legendary King of Uruk.  Rob defeated the mad old King, and took the King's powers away, giving Edwin his immortality.  The plot, as I said, is a bit disjointed.  It opens with Rob murdering three men who threaten to rape Julianne.  His guilt feelings tormenting him, as well as his lack of communication, he finally confesses his powers to Julianne. Understandably offended, and not able to trust her own feelings (is Rob controlling her so that she just thinks she loves him?), she kicks him out and thinks about a divorce.  At the same time Carina, an archaeologist, insists on travelling to Central Asia to find Gilgamesh, and to interview him about daily life in ancient Sumeria.  Edwin pushes Rob to accompany her there.

That's the first thread, and it's resolved all too suddenly.  Gilgamesh is dead.  Rob in despair puts the make on Carina, but after a brief time they make up.  Julianne suddenly decides she can trust Rob.  Then plot 2 comes up: a disaster on the trip home from the moonbase should kill Edwin and his companions.  When he survives (because of the immortality), he is accused of murder.  Rob is afraid that his secret will be revealed when they probe Edwin.  A sinister force within the space program keeps Edwin drugged, either trying to stick the murder charge on him, or worse ...

As I said, the book is still an enjoyable enough read.  But the plot is a bit disjointed, the main villain is too evil, and the various resolutions come too easily (in some ways, though there is still considerable cost to each of the characters).  Julianne is still not quite a successfully realized character, though Carina is well done.  Paradoxically, Brenda Clough is much more convincing, to me, with her male characters, Rob and Edwin, who come through very well.

Perhaps this is just a case of sequelitis.  And I hope I don't sound too negative: I still like the book, but it's not as good as the first volume.
Posted by Rich Horton at 5:00 AM