Today is Lois McMaster Bujold's birthday. I've enjoyed her novels immensely, particularly the earlier novels in the the Vorkosigan saga, and the fantasy quartet The Sharing Knife. In honor of her birthday, I'm reposting two reviews I did of a couple of the lesser Vorkosigan books. Alas, that! But those are the ones I reviewed. The first was posted on my old home page; and the second was one of the reviews I did for the fine UK magazine 3SF, edited by Liz Holliday.

The latest of Lois McMaster Bujold`s Miles Vorkosigan adventures, Cetaganda, is, by Bujold`s own testimony, a rather light-hearted romp, a bit of a step down in seriousness and apparent ambition from Barrayar and Mirror Dance, her most recent Vorkosigan novels. 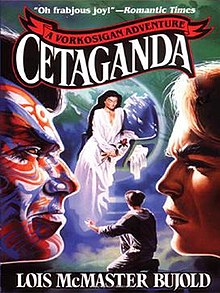 This novel is set a few years prior to the action of Mirror Dance. Miles is 21. He and his amiably dim-witted (by Miles` standards) cousin, Ivan, are sent to the home planet of the Cetagandan empire to attend the funeral of the Cetagandan empress. (They are chosen to go on somewhat unconvincing grounds: when did Miles and Ivan get elected Vice-President anyway?) Naturally, no sooner have they arrived (indeed, slightly before their actual arrival) they encounter a mysterious character and come into possession of a mysterious object (in fact, a rather slimly disguised MacGuffin). Miles being Miles, he does not sensibly report the incident to the Barrayaran Ambassador, nor to the local Imperial Security agent (to be sure, conveniently for the purposes of the plot, this latter person is away on some vague assignment). Instead, Miles bamboozles Ivan into supporting him in an attempt to resolve what quickly becomes a very delicate situation, on his own.

The two face deadly dangers, encounter beautiful ladies of both of the Cetagandan upper classes, and eventually find themselves enmeshed in a plot which threatens Cetagandan internal stability (and thus Barrayaran security, as Cetaganda is a traditional enemy.) A number of the details of the plot and the Cetagandan custom upon which the plot turns are unconvincing, but the book is exciting and entertaining and reads very well. Romance is somewhat backgrounded, although Miles does fall in love (hopelessly) with the most beautiful woman he`s ever seen (why does such a clever individual as Miles seem consistently to rate female beauty so highly? Though to be sure, he is only 21, and I guess us guys are guys, huh?!), and there is an almost perfunctory romance between two minor characters. (Ivan, to be sure, is quite amusingly involved with some beautiful Cetagandan women, and Bujold does provide one quite funny incident involving him and an anti-aphrodisiac: another quite pointed and appropriate (I suppose) comment on male-female relationships results.)

The most serious side of the book is an exploration of Cetagandan culture, which is built around genetic engineering of themselves. This culture consists of the haut, who are the true rulers, and the most highly "engineered", the ghem, who provide the military might, and who are less "engineered" and less controlled (partly to allow for the spontaneous generation of potentially useful traits), the ba, neuter servants who also serve as useful safe experimental objects for genetic changes (safe because they are neutered and couldn`t pass on harmful traits), and, presumably, large middle- and under-classes of mostly normal humans. This society is quite interesting, and Bujold makes some subtle and intriguing observations on the sources of power, and the different kinds of power, in particular the power divisions between the males and females of both the haut and the ghem. However, I think a proper exploration of this society would require a good deal more space, and I would quibble with some of the assumptions, in particular, the Cetagandans don`t seem different enough to me to be the result of centuries of genetic engineering. Also, they seem to be optimizing for feminine beauty (by "normal" standards, yet!), even while sex is completely divorced (no pun intended) from their procreation efforts. I find that hard to believe.

All in all, this is certainly an enjoyable book, though not her best. And yes, it does have closure!

That`s not exact, but you get the point. 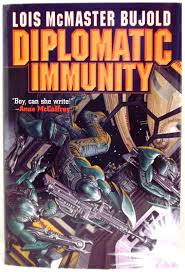 Lois McMaster Bujold's Diplomatic Immunity is the latest of her extended series about Miles Vorkosigan, an aristocrat from the rather autocratic planet Barrayar. After a spectacular if often chaotic earlier career, his life has settled down to some extent. He is an Imperial Auditor, directly responsible to his friend the Emperor, with the job of investigating situations that might be rather politically sensitive; and he has also recently married. As Miles returns from a honeymoon trip, the Emperor reluctantly orders him to try to solve a problem for Barrayar at Graf Station in Quaddiespace, the remote system inhabited by the "Quaddies", genetically modified four-armed humans who were introduced in Bujold's first award-winning novel, 1988's Falling Free, and who haven't been prominently featured since then. It seems that a Barrayaran crew escorting a group of merchant ships has gotten in trouble with the Quaddies, and the merchant fleet has been detained. Profits are at stake, as is Barrayar's reputation, and possibly their right to trade in Quaddiespace.

Miles shows up and finds that the situation is more complex than expected. One Barrayaran crew member has disappeared, and another apparently wishes to desert. The Quaddies are furious, and the merchants are furious. Luckily for Miles, he has an unexpected friend on Graf Station: Bel Thorne, the Betan hermaphrodite who worked with Miles early in his career, and who still secretly works for Barrayar. With Bel's help, he starts to get to the bottom of the various mysteries, only to find that an even worse crisis looms, involving the possibility of war with Barrayar's traditional enemy, Cetaganda, as well as a threat to destroy Graf Station.

Bujold is always a readable writer, and she tells a fairly exciting story here. But some of the energy of the earlier Miles books is lacking. One wonders if her interest in the series is declining, or if the newly settled nature of Miles life (his stable job, his happy marriage) has leached the tension from the overall series story arc. This novel is enjoyable but not exceptional, and the ending is reasonable but in many ways very pat, very convenient. Minor Bujold.
Posted by Rich Horton at 4:19 PM