Today is Michael Bishop's 73th birthday. Bishop is one of SF's great writers. I discovered him early in my SF reading career -- with, as noted below, "Cathadonian Odyssey" in the second issue of F&SF I ever read, and other early stories such as "Death and Designation Among the Asadi", "Rogue Tomato", "Blooded on Arachne", "Stolen Faces", and "Allegiances". His novel And Strange at Ecbatan the Trees takes its title from the same source material as my blog. My favorite of his novels is probably Count Geiger's Blues. I felt it necessary to do a compilation of my reviews of his work, but my time at Locus came fairly late in his career (not that his career is over at all!) -- so I've added a few less formal things from earlier, plus something I wrote just today about "Cathadonian Odyssey".

The first SF magazines I ever bought were the August 1974 issues of Analog, Galaxy, and F&SF. I devoured them all, bought one apiece for three consecutive days from the newsstand at Alton Drugs, and I knew that they were MY drug. From those first three issues, however, I don't necessarily remember the stories that well. In the August Analog, one story has stuck with me: "And Keep Us From Our Castles", by Cynthia Bunn, a really intriguing story about a future penal regimen that I'd like to reprint some day. (Bunn has only published 6 stories that I know of (a couple as by Cynthia Morgan -- presumably one name is her married name?), but I liked what I saw.) The August 1974 Galaxy included Ursula K. Le Guin's Hugo winner "The Day Before the Revolution", but I confess that while I love The Dispossessed, I don't think nearly as much of this story, a prequel to the novel. F&SF for August had John Varley's first published story, "Picnic on Nearside" -- I don't recall realizing how important that story would seem later! -- and a good Dean McLaughlin piece, "West of Scranton and Beyond the Dreams of Avarice". But, except perhaps for the Bunn story, nothing blew me away. 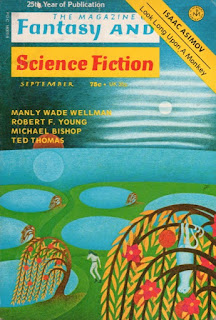 The cover story for the September F&SF was "Cathadonian Odyssey", by Michael Bishop. THAT blew me away. (The cover, by the way, was by Jeannine Guertin, the only work she has done in the field according to the ISFDB.) It's the first story I remember thinking "I need to nominate this for a Hugo" about. (I don't think I nominated that year, though I started soon after and haven't stopped since. "Cathadonian Odyssey" did make the Hugo shortlist, though, so I wasn't the only person to think it deserved a nomination.) I decided to reread it today and write about it. Perhaps not surprisingly, it didn't affect me as stronly 44 years later as it did back then, but I still think it's a good story.

Cathadonia is a remote planet that a human ship happens across, in what seems a highly colonized future galaxy. It's fairly lush, and fully human habitable, but the cargo ship that discovers it just rests for a bit, and the crewmen entertain themselves by slaughtering the three-legged local inhabitants. Then they leave, report their discovery but not their crime, and soon another ship comes by and drops off a survey team. However, the descentcraft of the survey team inexplicably crashes, leaving one survivor, Maria Jill Ian. Maria, with little hope of surviving until the mother ship returns, nonetheless almost randomly decides to head for Cathadonia's ocean. And soon she encounters a native, whom she christens Bracelos. They become friends of a sort, as she realizes that Bracelos has remarkable telekinetic powers. They continue to the ocean, but the closer they get Bracelos becomes more reluctant. And he demonstrates his abilities in shocking ways -- most notably by bringing Maria's husband's body (he died in the crash) to them, after she mentioned missing him. Finally Bracelos refuses to go closer to the ocean, and embarks on a particularly dramatic telekinetic effort. The ending is ironic or just on several levels.

Michael Bishop's "The House of Compassionate Sharers" is a somewhat ambitious story that didn't work very well for me. Too many ideas that don't cohere, and a forced ending that doesn't convince. The protagonist is a protagonist who has been repaired cybernetically after an accident, and who feels revulsion for humans, including his wife. (Bishop prefaces the story with the famous closing lines of Damon Knight's "Masks": "And he was there, and it was not far enough, not yet, for the earth hung overhead like a rotten fruit, blue with mold, crawling, wrinkling, purulent, and alive.") His wife sends him to the title house to be cured, and he is assigned to another being who has been altered to by largely cybernetic. Somehow this, combined with an encounter with an evil pair of sadistic clones, leads to a cure. Hmmm?

Michael Bishop's "A Spy in the House of Arnheim" is fairly intriguing, rather surrealistic, about a man waking up in a hotel room, unaware if he is a spy or a tourist or both, and continually puzzled by the ever-changing strangeness of his surroundings.

There is also a neat story in the November-December 2002 Interzone by "Philip Lawson" (Michael Bishop and Paul di Filippo). "'We're All in This Together'" is about a serial murderer who seems to get inspiration from the banal sayings of a newspaper column called "The Squawk Box". A mystery writer obsessed with contributing a saying to this column ends up involved in the murder investigation. Rather loopy, but with a serious core.

Michael Bishop’s “Vinegar Peace, or, The Wrong Way Used Adult Orphanage” (Asimov's, July) is powerful on its own terms, telling of a woman taken to the title institution after the last of her surviving children dies fighting another apparently wasted war. (It is only more wrenching to think of Bishop’s own terrible recent loss of his son in the Virginia Tech massacre.) The story at first seems poised to be darkly satirical, but it modulates to something quite moving.

Going Interstellar is an anthology comprising a mix of nonfiction and stories about interstellar travel – a refreshingly forthright bit of space boosterism, with the nonfiction trying to show practical ways of making starships, and the stories showing the starships in action. The best story is a long, goodhearted, novella from Michael Bishop, “Twenty Lights to 'The Land of Snow'”, which is “extracts from the computer logs of our reluctant Dalai Lama”. Said Dalai Lama is Greta Bryn, a girl on a generation ship inhabited by Tibetan Buddhists planning to colonize a new planet. She has been identified as the next Dalai Lama, despite not being either male or Tibetan, and the story follows some decades in her life (not all spent awake) as the ship approaches their new home and as she grows into her possible role (there is a rival claimant, it seems).
Posted by Rich Horton at 6:16 PM