On the occasion of Paul Barnett's 69th birthday, I'm taking the opportunity to post this review (that first appeared in Locus for June 2004) of his collection (under his usual pseudonym, John Grant) Take No Prisoners. 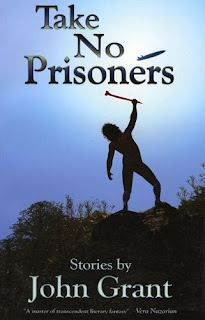 John Grant (who also writes under his real name, Paul Barnett) is not exactly unfamiliar to me – I've read a number of his stories, such as last year's fine "No Solace for the Soul in Digitopia". And of course his compilations of authorial indiscretions in "Thog's Masterclass" (a regular feature of David Langford's fanzine Ansible) are rightly celebrated. But I have not read any of his many novels – and so this book works very well as an introduction. Grant displays considerable range.  Included are a couple of humorous mysteries, several contemporary horror stories, an alternate history novelette, some SF and some fantasy and some very striking combinations of SF and fantasy.

Intriguing were a number of stories, mainstream, straight fantasy or a heady combination of fantasy and SF, which signal a tenuous link to each other by occasional references to The World and by the repetition of character names like Qinefer, Lo Chi, and Qinmeartha; as well as place names like Starveling.  Otherwise these stories show little connection, but I suspect that a greater familiarity with Grant's oeuvre, perhaps particularly his novel The World, would clarify matters somewhat. Not to worry, though: the stories work perfectly taken by themselves.  For example, there is "Mouse", at first reading straightforward SF about the exploration of an anomalous world and its alien-built structure, but which turns out to also concern the World and the Incarnate Gods who create much of it.  At its center is an affecting story of two people trapped in an alien room, one of them the title character (real name Qinefer), a woman who has rejected contact with other people, the other a man still recovering from his wife's departure.  Much different is "I Could have a General Be/ in the Bright King's Arr-umm-ee", about Qinmeartha, who betrayed his evil rulers to the Bright King, partly by seducing the evil Queen, Lo Chi. But he finds that Lo Chi's love exacts a price. "All the Best Curses Last for a Lifetime" tells of a created being who becomes the Soul of Evil. "Sheep" again seems straight fantasy, with this time Qinmeartha a brutal husband to the fair Lo Chi, until she sees a chance for revenge. "Coma" is set in our world, with Lo Chi a young woman in a coma, but it suggests links with a larger universe as Lo Chi's comatose mind explores a certain "chord". Finally, "How I Slept with the Queen of China" is purely mainstream, about a somewhat inarticulate young man trying to protect the title character (real name, again, Qinefer) from an abusive boyfriend.

The longest story in the book is "Snare", which tells of a briefly successful rock band through the eyes of the drummer.  He's in love with the lead singer, and agonizes through her other affairs, dreaming that she really feels something special for him. Much later the band is long gone, and he has married and has a mundane job, but once yearly he makes a pilgrimage and listens to the few songs they recorded. Song by song we learn the sad and ultimately disquieting story behind the group.

The two mystery stories are "A Lean and Hungry Look" and "A Case of Four Fingers".  Both are comic stories about the rather fumbling Inspector Romford. In the first he is dragged by his wife to a bit of "culture": an amateur production of Julius Caesar that gets a bit too realistic.  The second and better of the pair sets the story explicitly in the village of Cadaver-in-the Offing, which serves as the setting for all cozy detective stories. This requires someone to recycle the characters – and who better than the narrator (but let the story reveal that). This particular time a cadaver goes missing before it can be recycled. It seems that the murdered man, a great magician, has performed another feat and disappeared after death.  Can Romford solve the case?

"The Glad Who Sang a Mermaid in from the Probability Sea" is another dizzying SF/Fantasy combination, as the "Finefolk" find a way to flee Earth and the domination of the "Ironfolk" by learning FTL travel. But the Ironfolk inevitably follow ... In "Wooden Horse" a young man derails his doctoral studies by becoming obsessed with some old British WWII films shown at a seedy local cinema. The recitation of the films involved, and the reason they are so interesting, along with subtle details of the narrator's life, slowly spring the surprise, which is not precisely novel, but well-presented and queasy-making.

I am struck here not only by the variety of these stories, and the impressive imagination, but by the control of voice. His first-person narrators all tell their stories in characteristic and different ways: from the exuberant, arch, tones of the Finefolk narrator of "The Glad Who Sang a Mermaid in from the Probability Sea", to the archaic and mannered style of Qinmeartha in "I Could have a General Be/ in the Bright King's Arr-umm-ee", to the simple, even naive, words of the young man in "How I Slept with the Queen of China" – each a different voice, each perfectly matched to the story being told.  This is a book of first-rate work, by a writer worthy of more of our attention.