Today is Alan Dean Foster's 72nd birthday. In his honor, then, I'm reposting this rather brief review I did for Locus of his novel Sagramanda back when the book came out. 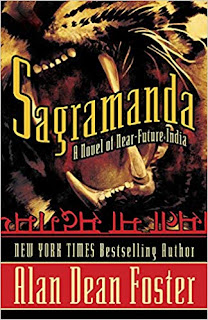 Sagramanda is a novel set in near future India, following several different viewpoint characters in an eventually interlocking narrative. As such it superficially resembles Ian McDonald’s brilliant River of Gods. Foster’s novel is not so brilliant as McDonald’s, and really it makes no attempt to be brilliant at that level. Rather, it is an enjoyable and fast-moving thriller – and quite successful as such.

Taneer Buthlahee is a scientist who has taken a spectacularly valuable piece of new technology from his company. He wishes to offer it to a rival company – for enough money to make he and his fiancée, the beautiful Depahli De, secure for life – away from India. For Depahli is an Untouchable, and a former prostitute, and thus their relationship is unacceptable to many in their home country. Taneer, thus, is a target – his company has sent a specialist to retrieve him, dead or alive. And his father is after him, to prevent the stain on their family’s honor of a link with an Untouchable. Taneer also involves a middleman to help him make a deal, a poor merchant, Sanjay Ghosh, who likewise is trying to make a secure life for he and his beautiful wife. At the same time their city of Sagramanda (transparently a fictionalized Calcutta) is threatened by two very different beasts: a man-eating tiger, and a Frenchwoman who has become a serial killer in worship of Kali. The novel follows, in short segments, all these characters – Taneer, Depahli, Taneer’s father, Sanjay, the tiger, the serial killer, the policeman investigating the murders, and more. And, as the reader knows from the start, all these threads will converge, some naturally, some by coincidence.

It’s quite an exciting read. The plot moves sharply, and quite believably. The characters are engaging enough, though rather two-dimensional. The portrait of fairly near-future India is fairly well-done, though here the book truly does suffer by comparison with McDonald’s altogether more complex and deeper portrait. Sagramanda is no masterpiece, but it is fun and not without deeper shadings.