Birthday Review: The Caltraps of Time, by David I. Masson

Birthday Review: The Caltraps of Time, by David I. Masson

The Scottish writer David I. Masson was born November 6, 1915, and died in 2007. (The ISFDB gives his birth year as 1917, but Wikipedia as well as obituaries I've found suggest 1915 instead.) He was one of a distinguished academic family, and he himself became a distinguished librarian (mostly in Leeds). (Shades of the great poet Philip Larkin, only slightly younger than Masson and for a long time a librarian in the English city of Hull.) He published only a few short stories, the great bulk in the mid-60s in New Worlds, with three more following in anthologies in the early '70s. The New Worlds stories were collected in an anthology, The Caltraps of Time, in 1968. This book was reissued in 2003 with the other stories also included, and it can be bought through David Langford.

We reprinted his most famous story, "Traveller's Rest", at Lightspeed in 1914. I wrote a short piece about Masson for that issue, linked here. What follows is a review I wrote in 2007. 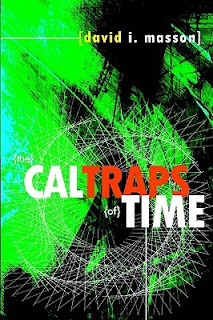 I bought The Caltraps of Time mainly for one story, his first: "Traveller's Rest", which appeared in New Worlds, September 1965. It has been anthologized very often, including in both the Merril and Carr/Wollheim Best of the Year anthologies that year. I must have read the story -- I know I read that Carr/Wollheim Best of -- but I was but a callow teenager and I don't recall it. But it is often mentioned as a particularly powerful and striking story by a rather litte known writer.

And indeed, "Traveller's Rest" does not disappoint. It is the story of a soldier fighting in a curious war. The opponent is not seen, not known. Apparently, the two sides fight across an impassable timelike barrier -- for their world is curiously constructed as to time flow. Near the barrier, time flows slower and slower, so much so that communication is impossible except over short distances. The change in rate of time is a feature throughout the world, but at greater distances from the barrier the time rate delta per linear distance flattens -- the overall curve seems a hyperbola. The soldier is relieved, and returns to the most inhabited areas, of relatively flat time gradients -- but of course it is long past the time he left. So he makes a new life, marries, has children -- and all these decades only minutes have passed at the front. Which hints at the inevitable conclusion. Masson's story has multiple lovely features -- some cute linguistic inventions, some nice explorations of the effects of even small time gradients, and a moving personal story. It provides real SFnal sense of wonder -- complete with a bitter and logical twist right at the conclusion. Outstanding.

The rest of the collection is not quite as good, but it is still well worth reading. Masson's abiding SFnal interests seemed to be time (and parallel worlds); and linguistic invention (including linguistic change over time). In some ways I am reminded of Ted Chiang, actually, particularly in a story like "Mouth of Hell" but also in "Traveller's Rest" and a few others. Indeed, in a lot of ways. (Noting, of course, that Masson was mining this territory before Chiang.)

My favorite among the other stories was "Lost Ground". Somewhat like "Traveller's Rest", Masson combines a couple of ideas. The first is a future in which weather is dominated by emotion-causing "fronts" -- a "bitter spell" might be in the forecast, or a "panic attack" -- the latter of which causes the death of the son of the two main characters. Then, oddly, but successfully, he introduces another notion -- time displacements -- places where you might suddenly walk to another time. (Reminiscent of Gordon Dickson's novel Time Storm, but again Masson was there first.) The wife vanishes in one, and the husband determines to follow her in, but these time displacements are not so predictable. The conclusion is quite moving.

Probably his other best known story is "A Two-Timer", in which a man from the 17th Century happens upon a time machine and accidentally makes his way to our time. Masson has a great deal of fun with the linguistic differences, and of course also the differences in attitudes. "Psychosmosis" is another highlight. It's set in a curiously different place, where mentioning the name of a dead person results in immediate disappearance. Thus any namesakes of a newly died person must change their names. But accidents still happen. The story examines the consequences of a few such accidents -- somewhat surprising results. This is one of those just plain weird ideas that may not make much sense but simply impress the reader with the writer's imagination.

In "The Transfinite Choice" a far future overpopulated Earth happens upon a means of reducing population pressure after the discovery of alternate worlds, separate from ours by an infinitesimal time interval. Of course, there is a (guessable) problem with this solution. Masson's most conventional SF story might be "Not So Certain", which is set on another planet, and deals with the problems caused by slightly imprecise translations of an alien language. Plausible, but really not terribly interesting. "Mouth of Hell" concerns a dangerous expedition to an apparently infinitely deep valley in the surface of the world. The title suggests what that valley might be, but Hell as such is not really dealt with in the story.

Finally, the three new stories are all somewhat weaker. Moreover, they are terribly bitter, indeed dyspeptic. Sometime between 1967 and 1970 Masson seems to have given up on the future of the human race. "The Show Must Go On" is not a story so much as a parade of descriptions of murder and violence -- mostly ignored -- in a decayed future. "Doctor Fausta" is the best of these late stories. A man meets a duplicate of himself and learns that it is possible to go to a parallel world, slightly different. It turns out his duplicate has a reason for convincing the man to switch universes, to do with a petty crime ring. Much of the story, however, has fun with the somewhat goofy linguistic differences between the two similar but not identical universes. Finally, "Take It or Leave It" contrasts two differing futures -- a not exactly utopian but livable, if busy, future and a bitter post-apocalypse future. The main point seemed again to be simply displaying a dyspeptic view of humanity -- there was little story (though some decent imagination).

Masson's best stories are profoundly worth continued attention, and this collection, though uneven, is absolutely worth reading.