Today is the 120th anniversary of the birth of Clive Staples Lewis (who, famously, died on the same day in 1963 as another British writer known for SF/F work -- Aldous Huxley -- and, of course, as an American President.) In Lewis' memory I'm posting this set of five rather informal (and somewhat short) "reviews" (blog posts, really) from some time ago. The four Narnia posts are all from a reread I did back in 2001 or so. (I couldn't find the others.) I purposely chose art from a variety of different editions of the Narnia books. As a kid when I first read them, from the library, several times over, the editions were the mass market paperbacks much like image shown for Prince Caspian below. 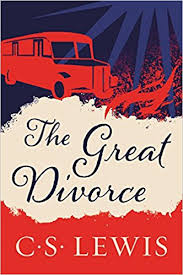 C. S. Lewis' The Great Divorce is a "novel" which serves really as a piece of Christian apologia.  It's very well done, fascinating reading, well-argued though I think attacking straw men in many cases. I don't see that it can persuade an atheist, but the advice herein seems very good for a Christian. In it Lewis has a dream in which he is waiting for a bus in a grey, rainy, city.  The bus takes him and a number of other passengers into the sky, then up a cliff onto a beautiful plateau, leading to a range of mountains.  He and the passengers seem insubstantial, but a number of beautiful, substantial, people come to try to help the passengers make their way to the mountains. This is Heaven, you see, and they have come from Hell. Lewis overhears a number of conversations between the souls in Heaven and the unsaved souls: in every case, the unsaved souls find excuses for not accepting joy and staying in heaven. Eventually Lewis meets George MacDonald, Lewis' great predecessor as a combination Christian apologist/writer of children's fantasies, and MacDonald becomes the mouthpiece for much Lewis' burden of teaching. For instance, the famous quote from this book, "there are only two kinds of people in the end: those who say to God, 'Thy will be done,' and those to whom God says, in the end, 'Thy will be done'" is attributed to the MacDonald character, though as far as I know it's not really a quote from MacDonald.

One of my rereading projects for this year is the Chronicles of Narnia. The second book (by order of publication, which is obviously the right order in which to read the books -- hmmmph!) is Prince Caspian.  The four Pevensie children return to Narnia a year after The Lion, the Witch, and the Wardrobe.  Soon they realize that hundreds of years have passed in Narnia while only a year has passed on Earth.  The reign of the four children is legendary.  Narnia has been ruled for some time by humans called Telmarines, who came from another country.  They have oppressed the talking animals and dwarfs and so on, especially recently, under the rule of the evil King Miraz. 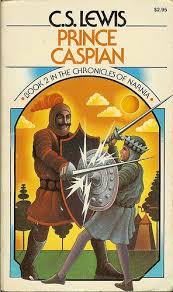 Peter, Edmund, Susan, and Lucy manage to save a dwarf from execution, and he tells the story of King Miraz' nephew Caspian (who is actually not a prince but the rightful King of Narnia).  Caspian was raised by a kindly nurse and a half-dwarf/half-human tutor, who told him stories of the glorious time of the High King Peter and the other Pevensie children, when the animals could talk, etc.  Caspian becomes a partisan for returning Narnia to a juster rule, and he also learns that he is the true King: that his uncle killed his father and exiled any loyal knights while Caspian was an infant.  When Miraz' wife finally gives him an heir, Caspian escapes and begins a resistance effort, with the help of a number of dwarfs and talking animals.  It is he who has called the four children back to Narnia (by blowing the magic horn introduced in the first book), and so the children make a journey to the site of the desperate battle Caspian is fighting with the much superior forces of the usurper.  And, of course, Peter and the others, particularly Lucy who seems closest to Aslan, help vanquish Miraz (who is doomed also by his natural suspicion and the dissension in his ranks).

This is an enjoyable book to read, but I didn't like it as much now as I liked it when a teen.  Not because of the Christian symbolism, which I didn't notice back then but which is clear as a bell now: I actually think that stuff is well done.  The main reservations I have are, first, the worldbuilding: which is really quite thin.  For example, as far as I can tell from travel times, Narnia must be no more than say 50 miles on a side.  By the same token the plot is simple, with a somewhat contrived ending.  And finally, Lewis is very anti-industry, anti-modernism of any sort, and at times that is expressed in a grating fashion, such as when he intimates that bridges are bad things. 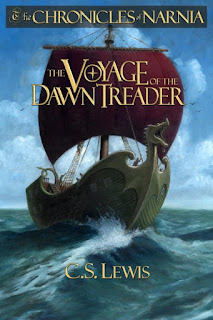 I jumped right back into my reread of the Narnia books.  I'd say that rereading the first two books they seemed diminished by time, but The Voyage of the Dawn Treader, not a favorite of mine when I was a teen, seemed better on rereading.  Edmund and Lucy, the younger Pevensie children, are staying with their nasty cousin Eustace.  Eustace has made fun of them for their belief in Narnia, but one day as the three children are looking at a picture of a ship, they find themselves once again in Narnia ... indeed, in the water next to the ship. They are rescued, and the ship turns out to be the Dawn Treader, on which King Caspian is sailing to the Eastern Ocean, trying to retrace the steps of the seven nobleman who had been loyal to his father, and who were exiled by the usurper King Miraz.  Also, Reepicheep the Talking Mouse wishes to travel all the way to the very end of the world (Narnia being flat), and to see what lies beyond.  The neat part of this book is the imaginative details of the various islands the travelers visit on the way.  In addition, the ending is beautifully handled, though it's got some of the same sadness as some of the other Narnia books, as Edmund and Lucy are told that this is their last visit.  Eustace has undergone some salutary learning experiences on the trip, but there are hints that he may return.  Caspian is paired off with a wife, and as a result I now see that Neil Gaiman's Stardust has a slight echo of Narnia in it.  (Though as I've said before, Stardust reminds me much more of Lud-in-the-Mist.)  The only drawback is Lewis' usual anti-modernity, but that rather comes with the territory. 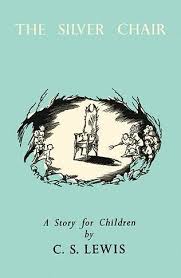 Continued galomping through Narnia with The Silver Chair.  Eustace, from The Voyage of the Dawn Treader, and his schoolmate Jill Pole, fleeing bullies at their school, escape through a gate into Narnia.  Aslan sends them to Caer Paravel, telling Jill a series of things she must do to help find the Prince, Rilian, the son of Caspian.  Rilian was searching for the serpent who killed his mother, and for ten years has been lost.  Eustace and Jill, with the help of a marsh-wiggle, Puddleglum, set out to the North to find clues about Rilian.  Braving some evil Giants, they learn that  he is underground, and they end up in a realm of "Earthmen", or gnomes, ruled by a beautiful Queen, and her Prince.  They learn, as you have guessed, that the Prince is Rilian and the Queen an evil sorceress, and through cleverness and bravery they fight free and back to the surface.  This book holds up pretty well.  The underground kingdom is pretty cool, and well described, as is the city of the Giants.  And Puddleglum is a delightful character, one of Lewis' best. 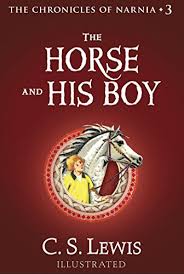 I continued my Narnia rereading project with The Horse and His Boy.  This is sort of a pendant to the rest of the books, being set during the reign of the four children from the first book.  It is set in Calormene, a corruptly ruled country, of an Arabian flavor, someways south of Narnia.  A young boy, Shasta, cruelly treated by his adoptive father, escapes with a horse who turns out to be a talking horse (Bree) from Narnia.  The two soon fall in with a noble girl (Aravis), running from a forced marriage to the evil Grand Vizier, who also is accompanied by a talking horse (Hwin).  When trying to sneak through the capitol city of Calormene, Shasta is mistaken by King Edmund of Narnia (who is visiting with Susan, as the Crown Prince of Calormene wishes to marry her) for the prince of Archenland, a country on the border of Narnia and Calormene.  Taken to the palace, Shasta escapes after finding the real prince, while Aravis meets one of her friends by luck overhears a plot by the Crown Prince to invade Archenland and Narnia to attempt to force Susan to marry him.  Follows a desperate ride across the desert to try to warn the Archenlanders, complete with encounter with Aslan, and revealment of Shasta's true identity (not much of a surprise).

This was my favorite Narnia book when I was a kid, but in some ways it doesn't hold up as well as some others.  For one thing, the meme "White men good, Arabs bad" seems to be tacitly understood.  Granted that in Narnian terms this can be explained by the degree of worship of Aslan -- it still comes off as frankly racist.  Also, I think the plot is easier to see coming at this age -- I think I was more surprised when a kid by the twists.  But there is much that is good, as well, perhaps especially the characters of the talking horses.
Posted by Rich Horton at 4:37 PM