These reviews are taken from blog posts I did at the time of reading, and I'm posting them today on Don DeLillo's 82nd birthday. They are the only books I've read by DeLillo. Both are fairly short, and both have slight elements of the fantastic or SFnal. 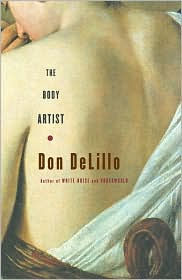 Don DeLillo's new novel (or novella, it's a bit over 25,000 words) is The Body Artist.  I haven't read DeLillo before, though I have a copy of White Noise buried in the "Ought to Read" pile.  This book, by all accounts, is not typical of DeLillo.  It certainly doesn't seem like the other books based on descriptions of them I've read.

Lauren Hartke is the "Body Artist" of the title (basically, a performance artist).  Her husband, a 64 year old Spanish film director, commits suicide one day, and she stays in their remote rural rented house for a few months, alone.  But soon she realizes she is not alone: a very strange, apparently brain-damaged, man is in the house -- possibly has been in the house since before she and her husband rented it.  Hartke can't bring herself to report this man to the authorities, and she spends some weeks trying to talk to him.  The man can hardly speak, and when he does, it's in incomplete sentences -- sentences which sometimes, eerily, sound like something her husband or she herself said in previous months.  Or even like something she will say in the future.  Was the man spying on them for months, and does his damaged brain recall fragments of conversations?  Is he somehow possessed by the spirit of her husband?  Is he a creature from a different dimension?  Is she making too much of this -- could these utterances just be random words to which her faulty memory assigns shape?

The book is more interested (as we might expect) in asking those questions than answering them.  Though clearly it's about identity -- certainly the questions about the suicided husband's identity are important -- and Hartke's "art" involves trying to reshape her body -- to remove all traces of her "self" and use her body as a template to take on other "identities" -- and of course the question of what "identity" the mysterious stranger has is important, too.  (I found myself, also, thinking of Sarah Canary.)

It's really very well-written.  I wasn't wholly excited by it -- I guess I wanted DeLillo to come closer to answers.  But the book is spooky and memorable, and the prose is excellent. It has been made into a 2016 film by Benoit Jacquot, called À jamais.

Don DeLillo is the author of such novels as White Noise and Underworld, a huge literary star, certainly one of a few names usually mentioned as possibly our leading American novelist. I've only read his two most recent novels, both very short: The Body Artist (2001), and now Cosmopolis, new this year. Cosmopolis is about 50,000 words long, about twice the length of The Body Artist, but still pretty short in comparison to DeLillo's more famous novels. So, if you are thinking I am lazy and/or intimidated by the other stuff, you're probably right. At any rate, I had read a few reviews of Cosmopolis, mostly quite dismissive, and I was going to skip it until I saw a positive mention of rec.arts.sf.written and almost the same time saw it at the library. What the heck, I figured, it's short. 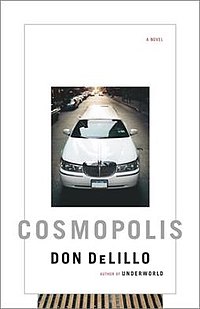 The "hero" (quotes definitely necessary) of this book is Eric Packer, an obscenely rich New Yorker who makes his money in the currency markets. He wakes up one morning in 2000 and decides to drive across town in his limousine and get a haircut. The novel follows his long trip, as the president is in town, and other complications ensue, making it a very slow progress indeed.

Packer does considerable work in his limousine, which is fully net-connected. Most of his work (that we are shown) involves tracking the value of the yen, which is inexplicably rising even though all indicators say it is grossly overvalued. Packer has bet that the yen will fall, and as it rises he loses more and more money, a process exacerbated by what seems his hubris, his refusal to cut his losses. He is also worried, or his security chief is worried, by what is called a "credible threat" to his life. Even so, Packer stops the limousine several times and gets out. He eats three different meals with his old-money wife of about a month, Swiss-born poet Elise Shifrin, each time trying to convince her to finally consummate their marriage. The sincerity of his feelings for her is undercut by his additional stops for a variety of sexual encounters -- with an old mistress, with an employee, with one of his security detail who catches his eye. But though she complains about his evident infidelity, their relationship seems more complicated than that.

Packer also has different encounters -- the funeral of a rap star he had admired, a pickup basketball game, a trip to a rave. And he meditates rather fatuously (to my mind) on the state of the world, of technology, the meaning of money and poetry, and the deaths of some of his rivals. Alternate sections present the "confession" of a former employee of Packer's, who, we soon gather, will murder him by the end of the book. And Packer keeps losing money, and slowly sheds his security detail, sometimes in shocking fashion, as the seedier part of the city is reached.

Obviously DeLillo is interested in, oh, the relationship between technology-mad "new money" America and the "old-money", perhaps more artistic, Europe (represented by his poet wife). But that seems only a side issue. Packer himself is a strange creation, wholly unbelievable really, as indeed his whole entourage and his obsessions seem huge exaggerations to me. In a way that makes the novel very cold, and Packer's fate not terribly affecting. He's a) not a nice guy, and b) not a real person. Still, I was rather absorbed by the book, and I found it interesting if not exactly gripping. It is perhaps best read as satire, and Packer best seen as nearly a comic grotesque -- an exaggeration.

(There are, incidentally, very minor SFnal aspects -- mainly a camera that seems to see the near future. And the general feel of the book is at least very slipstreamish -- I am sure Bruce Sterling would happily have included it in his list of candidate slipstream novels if it had appeared before Sterling's 1989 article that introduced the term.)

Cosmopolis was made into a film by David Cronenberg that was released in 2012.
Posted by Rich Horton at 5:36 PM