Birthday Review: Bones of the Earth, by Michael Swanwick

This is a review I did a long time ago for my old website, now defunct. So it seemed worthwhile to repost it on the occasion of Michael Swanwick's birthday. 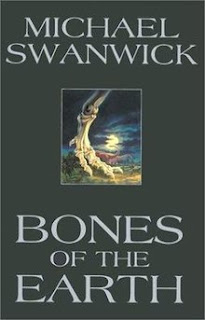 I've read some solid SF novels in 2002 so far -- The Years of Rice and Salt, Permanence, Schild's Ladder. It hasn't been a bad year. But nothing that really threw me until this one. Bones of the Earth is, about halfway through the year, clearly my favorite SF novel of 2002. It combines several well-integrated (and rather original) SFnal ideas with some neat scientific speculation, interesting characters, a compelling plot, and a powerfully argued theme about the nature of science and the human urge to do science.

The novel concerns a program to send paleontologists back to the Mesozoic Era to study dinosaurs in their natural environment. As such it is both a dinosaur novel and a time travel novel. Perhaps unexpectedly, the thematic heart of the book is in the time travel aspect, though the dinosaur speculations are worthwhile and fun in themselves.

The story opens in 2012 when Richard Leyster, a young paleontologist, is approached by a mysterious man named Griffin,offering him a mysterious job. He can tell him nothing about the job, but he can show him something -- a fresh Triceratops head. And he seems oddly certain that Leyster will accept the job. Leyster does, of course, and several months later he finds himself at a strange scientific conference, attending presentations about field work in the Mesozoic, and being accosted by a mysterious older woman (though she was born later than he) named Gertrude Salley, who implies a past relationship. Thus we have met the three main characters -- Leyster, the brilliant and studious scientist; Salley, brilliant herself but manipulative and unbound by law or rules; and Griffin, the tormented administrator of the entire program.

One key plot thread concerns a scheme by Christian fundamentalists to sabotage the time travel efforts, which ends up marooning a number of paleontologists in the Late Cretaceous. Griffin and his assistants try to loop back and forth through time to forestall this sabotage, but they are frustrated by the insistence of the sponsors of the time travel program that no paradoxes be created: thus anything they know to have "already happened" they cannot stop from happening. The other key thread involves Salley's attempts to subvert that law -- right at the beginning we see hints that she is trying to cause paradoxes, and her attempts continue, though her motive remains unclear to the reader for some time.

The scenes in the Cretaceous involve some well-handled "primitive survival" scenes, and some fascinating speculation about dinosaur social life and about the real causes of their extinction. The other thread involves some very clever handling of time loops and paradox, and an eventual trip far into the future to meet the Unchanging -- the mysterious beings who have offered the boon of time travel to humans. The resolution is surprising, logical, and achingly sad, or at least bittersweet. Swanwick is convincing treating human curiosity, our love of science. He is convincing treating human reactions to the possibility of fixing our past mistakes. There are some lovely set pieces involving encounters with prehistoric beasts, and one involving a young girl fascinated by Mesozoic sea life. The characters are well-drawn, particularly Griffin and his boss, the Old Man. Leyster and Salley are well done as well but a bit less fully realized -- or pass too clearly idealized to fit their parts. The minor characters are interesting, too. I loved the book, and I was quite moved by it. I think it is one of the best time travel novels in all of SF.
Posted by Rich Horton at 12:25 PM