Old Bestseller: The Cobbler of Nîmes, by M. Imlay Taylor

Old Bestsellers: The Cobbler of Nîmes, by M. Imlay Taylor

Back to a true Old Bestseller type book. That said, I don't think this book was a bestseller, and indeed I'm not sure Taylor ever had a big bestseller. But she was an at least mildly popular writer. Her full name was Mary Imlay Taylor, and that seems to be her maiden name (in that one contemporary notice I found refers to her as "Miss Mary Imlay Taylor"). She was known as something of an expert on Russian history, and several of her books were set in historical Russia, including one of her best known, On the Red Staircase. Another popular book was The Impersonator. Her dates were 1878 1938.

The Cobbler of Nîmes was published in 1901, when Mary Imlay Taylor was only 23. It is copyright 1900, suggesting perhaps an earlier serialization? The publisher is the Chicago firm A. C. McClurg. My edition has a note on the flyleaf: "12/25/06 Merry Christmas to Marmee [?] from Willie". 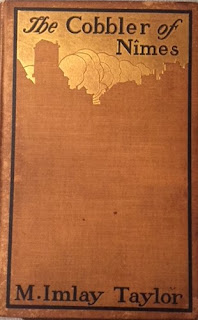 I've previously written about several historical novels set in 16th and 17th Century France, all by English or American writers. Some of these concerned the conflict between Catholics and Protestants (Huguenots), which was theoretically resolved in 1598, when Henry IV promulgated the Edict of Nantes, granting significant civil rights to the Huguenots. (Henry IV himself was raised Protestant, but famously converted to Catholicism, saying "The Crown is worth a Mass".) These books are listed below, with links to my reviews:

1515: When Knighthood Was In Flower, Louis XII

The Edict of Nantes, however, was revoked by Louis XIV in 1685 via the Edict of Fontaineblue. This led to decades of persecution of the Huguenots, and violent resistant from them. This is the backdrop against which The Cobbler of Nîmes is set. Its action occurs in 1703. The Huguenot, or Camisard, stronghold is in the Cévennes region of Southeast France. The King's soldiers, led by Marechal Montrevel, have a policy of burning Huguenot villages, and either executing the men or sending them to be galley slaves, and sending the women to supposed nunneries, in which they are mistreated and often die. (The Camisards, it should be said, also committed atrocities against some Catholic villages.)

The title cobbler, M. Charlot, is a hunchback (called le Bossu), and a good Catholic. He sees the exhibition at a fair of a "damned person" -- a young woman who died of her mistreatment at the Tour de Constance. He notices a young man at the exhibition, who seems distressed, and offers him a place. He is François d'Aguesseu, a Huguenot and the brother of the dead woman. Charlot urges him to hide, and arranges for him to have a place at the chalet of Mme. de Saint Cyr, who lives alone except for a serving woman, Babet, and her granddaughter Rosaline. They are secretly Protestants, and all the rest of the family has died in the religious unrest.

The reader will not be surprised that François and Rosaline are soon in love. But there are problems. A local commander in the French Army, M. de Baudri, fancies himself in love with Rosaline, though his love seems sadistic and rather vile. He is ready to pressure her to marry him in exchange for protection for her family from persecution. Another vile individual, Mère Tigraine, a local fishwife and fanatic Catholic, has discovered François's hiding place at the chalet. Meanwhile, François has a chance to flee to England (where his family has some money), but he refuses to either leave the Saint Cyrs in danger, and also he wishes to join the Camisards and fight for Huguenot rights.

In the end it is up to Charlot, at great risk to himself, to arrange for the escape of François and Rosaline, despite the interference of Mère Tigraine. There are battles to come, and a desperate capture of Rosaline, and a magnificient sacrifice by Charlot, who of course is in love with Rosaline himself, hopelessly, though she has always, unlike almost everyone else, treatedhim kindly. The ending is pretty predictable, and to some extent it comes off a bit flat, though Charlot's actions are pretty affecting.

This is a pretty minor effort among the great rush of historical novels that appeared around the turn of the 20th Century. But it's not bad either -- Taylor was a writer with real ability, though not a great writer. She does seem to have been quite scrupulous in her attention to historical accuracy.
Posted by Rich Horton at 6:51 PM