Today is Kathleen Duey's birthday. In recognition of that, I've posted this pair of reviews I did at time of publication of the two novels in her Resurrection of Magic series. I really like these books -- alas, the series was never completed, for the sad reason that Kathleen Duey has had problems with some form of early-onset dementia. Skin Hunger, by the way, was a finalist for the Newbery Medal. [Note: Kathleen Duey died on June 26, 2020.] 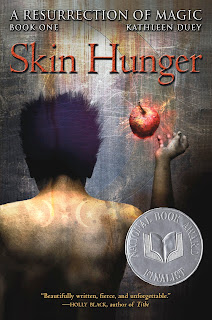 Skin Hunger is the first book in a new Young Adult fantasy series by Kathleen Duey, collectively called The Resurrection of Magic. It is first in a series, and as such nothing is really resolved. Indeed, the ending is quite abrupt, and the book can’t be said to stand alone. But it is very fine work, quite explicitly demythologizing such fantasy clichés and schools of wizardry, with characters who we want to like but who are not necessarily unambiguously good. I was involved throughout, and I eagerly await succeeding books.

It is told on two separate tracks, apparently decades apart. (The question of how apart the events on the two tracks are in time, and exactly how they will be joined, is not answered here -- it’s certainly a key mystery to be revealed.)

The book opens with a young boy fetching a witch to help his mother through childbirth. But the mother dies anyway, and the witch absconds with the family’s valuables. The boy and his father, thus, have reason to abundantly hate witches, and we eventually gather that sorcery is not particularly respected in this land in any case. So when his sister, the baby his mother died bearing, seems to have unusual powers with animals, he refuses to believe her. The girl, Sadima, grows up loved but lonely, her isolation enforced by her grieving father’s withdrawal from society. In time she decides to leave for the city, especially after meeting a man named Franklin who takes her powers seriously and asks her to meet him if she can come to the city.  And in the city she does meet Franklin, and Franklin’s friend Somiss (though Somiss’s true relationship to Franklin is only slowly unveiled). Somiss is a scion of a family related to the King, but he as run away to try to gather the long outlawed knowledge of sorcery. Franklin and Sadima try to help him, by copying old songs and books, and by keeping house for him, despite his selfishness and secretiveness.

The other narrative track is told by a boy named Hahp, younger son of a wealthy man in the same city Sadima comes to. But evidently Hahp lives some time later, for he is sent by his father (who he hates) to a mysterious school of wizardry. This school is apparently run by Somiss, with Franklin a leading teacher. The small group of mostly aristocratic boys endures exceedingly harsh treatment to try to develop their powers, most notably starvation and a deliberate strategy of pitting each boy against his fellows. Over the course of something like a year Hahp finds, to his surprise, that he does have some magical ability, but he also learns to hate the wizards, and he slowly begins to resist their rules, and to try to forge alliances with his fellow boys.

All this -- the whole book, really -- is mainly scene-setting. Just at the end some things happen that seem to promise great changes, on both narrative threads. But we must wait for future books to learn what happens, and to learn how Franklin and Somiss advanced from their position hiding out with Sadima to being leaders of an apparently approved magical school. And what of Sadima herself, unquestionably the most likable and virtuous character in the book, but ominously absent from Hahp’s thread? All these questions are intriguing indeed -- good reason to anticipate book 2 of The Resurrection of Magic.

This is the second in a series of YA novels collectively called A Resurrection of Magic. I was very impressed a couple of years ago with the first book in the series, Skin Hunger. I should mention immediately that this is definitely a series you want to read in order -- the second book won’t make nearly as much sense without having read the first. 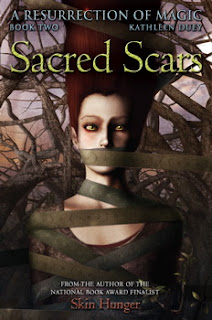 Sacred Scars, as with Skin Hunger, is told in alternating chapters, from different points of view. One track follows Sadima, a young woman from a farming community who, in the first book, comes to the city of Limori and ends up staying with two young men: the aristocratic and cruel Somiss; and the much nicer Franklin, Somiss’s servant, with whom Sadima falls in love. Somiss is trying to learn as much about magic as he can, though it is illegal; and Sadima helps him at Franklin’s behest, mostly by copying the old "songs" that Somiss thinks may be spells. By the end of the first book, the three are driven from the city and hole up in a cave, along with several homeless boy Somiss has kidnapped, hoping to recruit them (by whatever means) to further helping him.

The second track, we realize, is set much later in time, though how much later is unclear. Hahp is a young boy from a rich family who has been sent to the Limori Academy of Magic. It seems that magic, while still mysterious, is in regular use, at least among the rich, and one dangerous route to prestige for younger sons is to become a wizard. But it becomes clear that the method of instruction is sadistic and that many, perhaps all but one, of the boys in Hahp’s class will die. Hahp has a certain magical talent, and he forms an uneasy alliance with his roommate, Gerrard, who has different talents. The leader of the Academy is Somiss, and the other teachers include Franklin and (we learn) at least some of the boys Somiss had kidnapped, now grown, of course.

Sacred Scars takes a long time to get going, and I do feel that the first half of the book would have benefited from some cutting. (Sacred Scars is considerably longer than Skin Hunger.) For much of the book very little happens. In Sadima’s track, she continues to urge Franklin to break with Somiss, and to help her free the kidnapped boys and flee. At the same time, Sadima learns more and more of Somiss’s cruel nature, which encompasses among other things a history of rape; and she begins to wonder how much Somiss is lying to Franklin about the magic he is learning -- especially as it seems that in their different ways Franklin and Sadima may be more talented than Somiss. And on Hahp’s track, there are repeated examples of magical lessons, which are mostly of the "throw him in the water and hope he swims" variety. But Hahp does learn some magic, some of it remarkable. Nonetheless, his hatred for the wizards and their sadistic system of instruction remains fixed, and he urges Gerrard to support him in forming an alliance with all the surviving boys to try to counter the wizards.

Things speed up midway through the book, roughly, when Sadima at last gets up the courage to escape; and when Hahp starts to form further ties with his fellow students. There are some surprising and quite wrenching developments. The book ends, however, very much as a middle book: much has changed, but nothing is resolved.

After the slow start, I enjoyed the book immensely. Sadima in particular is a very involving character, and her fate is surprising and yet quite logical. Some of what I thought about the timeline of events as revealed in Skin Hunger turns out to have been wrong, and it’s clear that the next book will have some very interesting political developments to follow, as well as some doubtless wrenching personal changes.

This is a well-written book, full of well-depicted characters. Duey is tackling the right questions -- the proper use of power, the question "can the genie be kept in the bottle?", responsibility for others, even enemies. That said, it is as I have implied very much a middle book. It is enjoyable to read, but its ultimate success will only be clear after the series is concluded. At any rate, I continue to recommend Duey’s books -- I’m eagerly anticipating Book Three.

[And, as noted above, Book Three has never appeared, alas.]