Tony Daniel turns 55 today. He received a lot of well-deserved notice in the 1990s for his first couple of novels, and for stories like "Life on the Moon" and "The Robot's Twilight Companion". The novel in question, Metaplanetary, the first of a planned trilogy, appeared in 2001, and its successor, Superluminal, in 2004, but he couldn't sell the third book, and nothing else came out until an enjoyable novel from Baen in 2012, Guardians of Night. He has continued to write and edit for Baen since them. For his birthday, I am posting a review I wrote first for my blog back in 2001, of Metaplanetary. 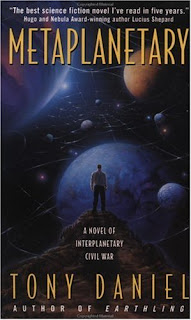 The best reading I have done recently, however, was of Tony Daniel's new novel Metaplanetary. So far, this is the best SF book I've read from 2001. Metaplanetary is a grand, involving, novel set in 3013 C. E., in a fully colonized solar system which is about to burst into a vicious civil war. It is chock full of neat, if perhaps not always fully plausible, SFnal ideas. It managed to excite my somewhat jaded sense of wonder, and it made me care deeply about quite a few characters, and it advances some interesting and worthwhile moral themes. Its main flaw is that it doesn't end so much as stop -- it's part of a trilogy (the sequel was called Superluminal, and the third book never appeared), and it really does not stand alone. Another, lesser, flaw, perhaps, is that the villain is really evil -- no moral ambiguity there. But that said he is well-portrayed and interesting.

The solar system in 3000 or so is divided into basically two sections. The inner system, called the Met, consists of the inner four planets, and a gloriously weird system of tubes connecting them, which makes the whole thing look like a spider web, sort of. Many people seem to live in the tubes, or in nodes of the system, called bolsas. Mercury, with all that energy available, is the dominant planet. Earth has been largely returned to nature.

The outer planetary systems have all been colonized, with varying degrees of success. Triton, Neptune's big moon, is one of the most successful colonies. In addition, a number of artificially intelligent ships live permanently in space, particularly the Oort clouds, and they have traveled as far as Alpha Centauri. (These are called cloudships.) The Met doesn't reach to the outer system because the asteroid belt is impractical to cross with the tubes.

Besides the Met, the other key SFnal notion of the book is "grist". Basically, grist is very "smart" nanotech. Most if not all humans have an integrated bunch of grist attached, called a pellicle, which hosts a version of the their personality in AI form, called a convert. There are also "free converts", AI's based on scans of human brains but which don't have a biological body.Humans can interact with both free converts and with the "attached" converts of other humans in Virtual space, and all of the system, pretty much, is instantaneously connected by a grist network called the merci. And some humans are what are called LAP's -- LAP stands for Large Array of Personas: they are in essence a network of clones and converts that can be physically and virtually in many places at once.

For the most part, the solar system is in something of a Golden Age. The physical needs of people seem to be well supplied. A critical political issue is the rights of "free converts". Some do not consider them "Human" -- they are just computer programs, in this view, without real free will, without, if you will, "souls". But others, especially in the outer system, regard them as clearly human.

The novel is told from a variety of points of view: a couple of cloudships; a free convert named Danis Graytor; Danis' human husband Kelly; their daughter Aubry (who has a human body but is considered a "half free convert"); an artificial woman named Jill with a body made of grist and a braine based on a ferret's; Colonel Roger Sherman, the military leader of Triton's forces; Sherman's son Lee; Director Ames, the leader of the Met government; General San Filieu, an aging Catalan woman under Ames influence who leads the Met attack on Triton; and more. This gives us a good look at the variety of ways people live in this future, and at what it is like to be a free convert, or a cloudship, or a human with a pellicle and convert attachment, or a LAP. This also helps keep the action moving, important in a fairly long book.

The action of the novel is exciting and fascinating. We see atrocities, such as some clever means of torturing AIs, and a brutal attack on Triton with some scary uses of space tech; and we see heroism in the resistance to these atrocities. We see convincing depictions of sex between humans and AIs, and of alternate means of travel in a physically linked solar system, and of AI entertainment. We get useful glimpses of the history of this future: the young life of Director Ames, the development of the cloudships, the invention of grist and the merci. It's a fairly long book, but never boring.

The characters are fully rounded, even the villains. (If they are evil, and many are, they are evil in interesting ways.) Daniel gives his different characters and narrators different voices. His prose is generally sound, occasionally lapsing into cliche, but at other times very nice. His scope is vast, and his theme is one of the great SF themes: "What is a human?" He illustrates this nicely with his array of characters of vastly different "shape" or composition; and he metaphorically illustrates even more nicely the associated conflict of viewpoints between individualists and collectivists: hinting by the end at a truly scary collectivist vision. The scary parts of the book are convincing and often quite original, and very scary: and the heroism is moving and believable. I really liked this book.
Posted by Rich Horton at 12:22 PM