Today is the birthday of one of the very best contemporary writers of true Hard SF: Stephen Baxter, and in his honor I offer this compilation of my Locus reviews of his short fiction.

The December Analog is a fairly solid issue. Best is Stephen Baxter's "The Hunters of Pangaea". This is a meditation on intelligent dinosaurs in the late Jurassic -- herders of Diplodocus. Intriguing speculation on social organization, and a moving portrait of their evanescence, combine for a very effective piece.

Stephen Baxter's "Breeding Ground" (Asimov's) is an interesting, dark, story of the human "Third Expansion", and their battle with the Xeelee, in this case telling of a disastrous space battle that causes a group of soldiers to retreat to the core of their living starship, and possibly to learn a key secret about these curious beings.

The best pieces in the March Asimov's are Stephen Baxter's "The Great Game" and Lucius Shepard's "Only Partly Here". Baxter's piece is another deeply cynical story about far future humans in conflict with the inscrutable Xeelee -- in this case a human planet is succumbing to catastrophic vulcanism, and the Xeelee are suspected, at least enough for a militarist Admiral to see a potential casus belli.

Stephen Baxter's "Touching Centauri" is a novelette (reprinted from last year's UK collection Phase Space) featuring the hero of his Manifold books, Reid Malenfant, in yet another alternate future. This time Malenfant has sponsored an attempt to image a planet of Alpha Centauri by laser. When the laser pulse doesn't return, the very structure of the universe comes into question. I was reminded of a classic Philip Latham story, "The Xi Effect" -- like that one, Baxter's story is effective metaphysical horror.

From the June Analog Stephen Baxter's "PeriAndry's Quest" stands out in presenting a really fresh idea, and using the idea provocatively. PeriAndry is a young man in a society living on "Old Earth" -- whether this is Earth after some strange calamity or somewhere else is not clear. PeriAndry's people live on a ledge on a high cliff -- and the effects of altitude are very strange. Go up the cliff and time runs faster, down and time slows. The people in the "Attic", who live on a higher part of the cliff, age much faster than the people on the Ledge. PeriAndry takes a fancy to a servant girl -- who will be a year older in a month, and was born only a year and a half previously. The social effects of this are explored nicely as PeriAndry struggles with his older brother's jibes, and as he eventually tries to find the girl in her home. 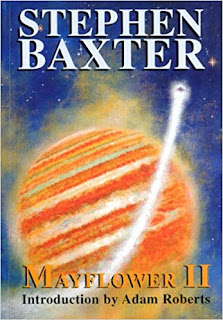 The publishing company behind Postscripts, PS Publishing, also continues to issue outstanding novellas in slim volumes. Their best offering this year, and one of the best novellas of 2004, is Stephen Baxter's Mayflower II. This is the story of a generation starship. The ship is fleeing Port Sol, a distant habitat in the Solar System, doomed to be destroyed by the Coalition. The main character is Rusel, who is forced to abandon his lover when he is chosen to be part of the limited crew of the ship. He becomes an Elder, one of a select few chosen to give the generations of starship inhabitants guidance and continuity of purpose. Over the depths of time, however, both he and the inhabitants change in curious and chilling ways. This is a striking and invigorating story, a direct response to classic SF stories like Robert Heinlein's "Universe" and Brian Aldiss's Non-Stop, with perhaps nods in the direction of Poul Anderson's "The Troublemakers" and even such a recent story as Ursula K. Le Guin's "Paradises Lost". Baxter considers the many problems raised in the history of the field's treatment of this common idea, suggests answers for some -- and raises new problems.

I also liked "Climbing the Blue" (Analog, July-August), a Stephen Baxter story set in the same strange world of last year's "PeriAndry's Quest". In the world, people live on a sort of cliff, such that time flows faster at higher levels. Celi is a young man who becomes a doctor, and is faced with the lure of moving down to slower times and become a Natural Philosopher, in order to live (relatively) longer and learn more about his strange world. But a tragedy pushes him in a different direction.

Stephen Baxter’s "The Lowland Expedition" is another of his tales of Old Earth, where time moves faster at higher altitudes: thus a typical -- but pretty good -- Analog "exploring a weird environment" story. In this case his explorers encounter a strange danger on the nearly uninhabited bottom level.

Stephen Baxter's "Between Worlds" is set near the Galactic Core. One faction of a newly disunited humanity is forcing people from their very odd homes. But one woman refuses to leave, on the grounds that her child has been left behind. A simulacrum of Michael Poole (hero of an earlier Baxter novel), as well as an acolyte of a strange future religion, try to talk her into evacuating -- but the problem is that her daughter is a post-human being in a plasma cloud. Baxter mixes intriguing astronomical settings, political speculation, religious speculation, and various potential future forms of humanity -- not just patterns in plasma clouds, but computer simulations, and nonintelligent starship crew.

Another story that successfully reaches for a thoughtful and philosophical conclusion is Stephen Baxter’s "Turing’s Apples". It’s a sibling rivalry story -- the narrator and his brother are both "mathematical nerds", but the younger narrator is more "normal" -- married with children, and in a fairly good government job involving supercomputers. His brother is the genius, and the one without social skills, and he cozens the narrator to sneak a program analyzing a SETI message that seems to be the code for an alien AI onto the government’s computers. Of course the AI’s intentions are not necessarily benign -- but again, Baxter’s interests are not conventional, but rather in exploring a not benign, perhaps, but quite interesting alien purpose for this AI, with profound long term implications.

"Earth II", by Stephen Baxter (Asimov's, July), is an involving story set on a planet colonized by refugees from a flooded Earth. Centuries later, Xaia Windru is the co-Speaker of the nation Zeeland, and as traditional for women, is the war leader, and she has just defeated the Brythons, and now wishes to press across the sea to a new land and the rumored City of the Living Dead. Back home, her husband, the political leader, is dealing with demands for a new Library to store the data saved from the Founders. Questions of the nature of the planet’s original inhabitants (possibly another single species ecology, though quite different to that depicted in Daniel Hatch’s story), and of the dangers of a coming axial flip, and of leaning on the records of the Founders, all entwine. Solid work indeed.

Analog for December includes another Old Earth story from Stephen Baxter, about an Earth where time runs at different rates at different altitudes. I’ve found these fascinating, and "Formidable Caress" is pretty strong too, about an inquisitive man from deep in the slower running areas who makes a number of striking astronomical discoveries that shed some light on Old Earth and the "formidable caresses" that seem to have shaped its history. I will confess, though, that I was a bit disappointed at the closing revelation, which will mean a lot more to people who have read Baxter widely than to those unfamiliar with his novels.

Lots of good novellas this time around, even in the magazines. Asimov’s for February features Stephen Baxter’s "The Ice Line", another in his extended series of stories about an alternate history where ice-loving aliens invaded in the 18th Century. This story is set in this history’s version of the Napoleonic Wars. The somewhat rascally American engineer Ben Hobbes, an associate of Robert Fulton, is serially captured by the French and then the British, and is recruited to use his engineering ability (he and Fulton designed a submarine) on a much more ambitious ship, against a more dangerous enemy than the French. Quite enjoyable work, with wonky steampunkish technology (though not really a steampunk attitude), and a nice counterpoint in the form of comments by the transcriber of Hobbes’s diary, the lovely Anne Collingwood (as Ben would have it).

That leaves the last piece of fiction in Starship Century as my favorite -- Stephen Baxter's "StarCall", about an AI controlling a star probe, who takes "calls" from people with accounts once a decade. Once person's decade by decade calls are followed, giving us a glimpse both at the progress of the star probe and at the changes back on Earth -- and it all works, so that the AI and its mission become real and human to us.
Posted by Rich Horton at 5:33 PM