Two Novels by David Lodge: Paradise News and The British Museum is Falling Down

Two Novels by David Lodge: Paradise News and The British Museum is Falling Down

Here are two reviews I did of books by the excellent English critic and (mostly) comic novelist, David Lodge, back in 2003. 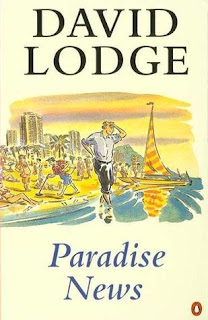 I've been interested in trying the works of the English writer David Lodge for some time.  Indeed, I've read some of his popular criticism, and I've read one very short novel he adapted from a play, but never a full-length novel.  He's a comic novelist in the central tradition of British writing of latter half of the 20th century, and he's also a Catholic (at least by birth), always something of interest to this lapsed Catholic.  At the big St. Louis area used book sale a couple of weekends back I picked up a copy of his 1991 novel Paradise News, and I went ahead and read it.

The novel concerns Bernard Walsh, a former Catholic priest who is teaching theology half-time at a depressing college in a depressing English town.  His aunt contacts him from Hawaii with the news that she is dying, and that she would like him to convince his father (her brother) to visit her, at her expense, for one last time.  They have not met since the '50s, for insufficiently explained reasons, though the scandal over Aunt Ursula first marrying, then divorcing, an American serviceman might have something to do with it.

Bernard's father is a disagreeable old man who is afraid of flying, but somehow, with the unexpected help of Bernard's scheming sister Tess, who is afraid of losing Ursula's fabled inheritance, he is convinced to go.  Bernard lucks into a last-minute cancellation of a tourist package, getting the two of them a cheap flight, and more to the point of the book, allowing Lodge to portray a wide variety of English tourists, to a variety of comic effect.  Some of the thematic center of the book is provided by an academic, an anthropologist of tourism, who has various cockeyed theories about the ritualistic place of tourism in human life, and who is much taken with the repeated motif of "Paradise" in the names of Hawaiian tourist traps.  The other thematic center, of course, revolves around Bernard's own loss of faith, and the stories of his rigid Catholic upbringing, his seminary training, his years teaching, and his brief time as a parish priest.

In Hawaii, Bernard's father is almost immediately run down by a car (he looked the wrong way for traffic because of course American drive on the wrong side of the street).  So Bernard's time is taken up with dealing with his father's hospitalization, and then with Aunt Ursula's situation, partly in a shabby nursing house, partly in hospital.  Bernard must deal with finding a place for Ursula to live out her short expected term, and this in the light of her rather more straitened than expected circumstances. Bernard also meets and falls in love with the woman who ran over his father, a woman in the process of divorcing her husband, who hates Hawaii, but who proves just the right woman for an ex-priest whose only sexual experience has consisted of humiliating failure. We also get glimpses of the other English tourists, these functioning mostly as pretty effective comic relief.

I enjoyed this novel very much.  It's both very funny, and quite serious at core.  It's well-written, the characters are very well delineated, and their stories are involving and moving.  The serious aspects -- the exploration of faith, and paradise, and, yes, tourism, are interesting and intelligent.  The only quibbles I'd have would be the convenient resolution of some difficulties: some financial difficulties, and also the easy coincidence of Bernard's "meet cute" with an appropriate woman.  But, to be sure, those are conventions of comedy, to some extent.

The British Museum is Falling Down, by David Lodge 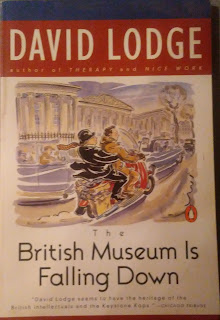 The British Museum is Falling Down, published in 1965, is the book in which David Lodge seems to have found his metier. His first two novels were (apparently) rather serious in tone -- and they seem to have been all but forgotten. This novel is his first comedy, and as far as I know all of Lodge's stuff since then has been essentially comic. Lodge is a great admirer of Kingsley Amis, and certainly Amis is one writer Lodge's work recalls. (There are two nods to Amis in the current book -- one character asks the protagonists opinion of a few contemporary writers, all names malaprops, including "Kingsley Anus", and at an academic party he identifies three attendees as taking notes to write academic social comedies, a genre dominated at that time by the spectre of Lucky Jim.) Lodge is of course his own writer, though, and this novel also reflects his personal Catholicism.

The novel is set during one day in the life of Adam Appleby. Adam is working on his Ph. D. thesis in English Literature, and he goes in every day to the British Museum to research his subject. He is also married with three young children. He dreads the prospect of another, but he and his wife are practicing Roman Catholics, and thus are restricted to the "Safe Method" of birth control -- basically an advanced version of the Rhythm Method. But this morning his wife is now three days late for her period.

Adam's day is very funnily detailed, as he basically gets nothing done on his thesis, between problems with his motor scooter, worry about his wife being pregnant, and various misadventures, involving a fire scare, a sherry party, and a visit to the aging niece of a minor Catholic novelist on whom Adam is something of an expert. The book is short, cleverly written, very smartly plotted. Lodge includes sections parodying the work of a number of well-known writers, such as Conrad, Joyce, and Hemingway. The characters -- Adam, his wife, his friends Camel and Pond, the novelist's niece and her daughter, a fire-breathing Irish priest, etc. -- are delightfully portrayed. It's not as substantial a book as such later novels as Changing Places or Paradise News, but it's great fun.