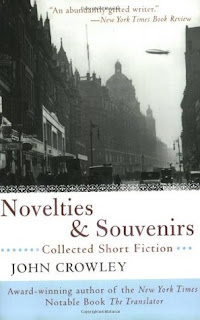 John Crowley, with Gene Wolfe my favorite living SF writer, turns 76 today. My favorite of his novels is Engine Summer (1979), and his novel from last year, Ka: Dar Oakley in the Ruin of Ymr, is of similar quality. Indeed, his first novel, The Deep, which I discovered in the Doubleday hardcover edition at my local library around when it first appeared in 1975, is remarkable and original and strange. He may be best known for the atmospheric fantasy Little, Big (1981), and for the Aegypt sequence of four novels.

He has also written some of the most wonderful short fiction of the past four decades. Among my favorites are such stories as "Novelty", "Snow", "Great Work of Time", "Gone", and "The Girlhood of Shakespeare's Heroines", but really it is all wholly worth your time. As recently as this year he won an Edgar Award for "Spring Break" (which is SF, by the way, though the ISFDB doesn't know that). He has also won the World Fantasy Award thrice, for Little, Big, "Great Work of Time", and Life Achievement.

I've compiled a list of things I've written, some in Locus, others elsewhere or new to this blog, about his short fiction. It's weighted, naturally, towards more recent stuff. Let's begin with links to my earlier posts about his novels Engine Summer and Ka:

Review of Ka: Dar Oakley in the Ruin of Ymr;

Here then is my compilation of what I've written about some of John Crowley's short fiction:

One of my favorite John Crowley short stories is "Snow", first published in Omni in 1985. I reread it today. It's told by a man who had married Georgie, a rich and somewhat older woman for her money, and then fallen in love with her. Her first husband (source of all that money) had bought a "Wasp", a drone of some sort that followed her everywhere, recording her life. Sounds creepy, but the intent is not surveillance, but a record, to only be accessed after death. The couple separates, but never divorces, and after Georgie's death, the narrator inherits the right to view her life history. But when he does so, he learns that the access is only random. Worse, over time it degrades -- the images have "snow" (that's not the only use of snow imagery in the story). And it degrades in other ways. It's a really moving story, and a tremendous meditation on the nature of memory -- personal memory, and historical memory -- and besides that a fine character study, and just a beautifully written piece.

I thought the best short story of the year was "Gone" (F&SF, September) by John Crowley, a fable-like story about aliens who send some people odd little helpers. The protagonist is a divorced woman who seems to need to learn trust. A strange, really moving, story. [This story went on to win the Locus Award for Best Short Story.]

The best story in the book (Conjunctions 39: The New Wave Fabulists), perhaps the best new story I've read this year, is John Crowley's novella "The Girlhood of Shakespeare's Heroines". I should warn readers that this story is not remotely SF. But it is quite wonderful, about a boy and a girl who become friends while attending a Shakespeare festival in rural Indiana in 1959; and the curious way in which their lives remain linked. Mix some quite gorgeous prose with a mélange of such features as the Baconian heresy, photography, stagecraft, and an affecting and tragic love story – the result is simply wonderful.

And John Crowley’s “And Go Like This” is a delightful fantasia on an idea by Buckminster Fuller – that the entire population of the world could fit in New York City.

John Crowley is the latest author featured in PM Press’s Outspoken Authors chapbook series, with Totalitopia. The original story here is “This is Our Town”, told by a girl who grew up in Timber Town, which, she tells us, can be found in a book called This is Our Town, part of the Faith and Freedom series of readers for 4th and 5th grade Catholic students. The story concerns faith, and loss of faith, and miracles, and guardian angels, and problematic family members – it’s a John Crowley story, which is really all the recommendation required.

New Haven Noir is one of a very long series of original anthologies of crime fiction, each set in a specific place. The stories aren’t normally SF, but one is, this time: John Crowley’s “Spring Break” (which is currently on the short list for the Edgar Award for Best Short Story [it won]). It’s set a couple of decades in the future, when it seems universities are essentially virtual. As are books! The narrator goes on a “Spring Break”, to a real physical college (Yale, of course). And he encounters a real physical library, with real physical books. And a librarian, who has his own feelings about students who don’t read real books. Much of the charm in the story (which does feature a crime, but not one that is all that interestingly solved) is in the telling, in a convincing future slang – as well as the sort of behind the scenes meditation on the changing place of books in our culture.

(This issue has just appeared. If you enjoy Locus, please consider subscribing, or visit the website and consider donating or supporting the magazine on Patreon.)

Gardner Dozois’ final (I presume) original anthology, The Book of Magic, is here, and it lives up to the high standards set by his previous work. The best work includes “Flint and Mirror”, by John Crowley, framed as notes for a novel by Fellowes Kraft (a character from his Aegypt sequence). The story concerns Hugh O’Neill, heir to the throne of Ulster, and his upbringing first in Ireland, and then in England (for political reasons), where he meets the alchemist Dr. John Dee; and find himself set between two enemies (and their magic): the “old ones” in Ireland, and the Queen of England.