This would have been John Sladek's 81st  birthday. Sadly, Sladek, one of SF's great satirists, died fairly young in 2000. Sladek was born in Iowa, and lived the last several years of his life in Minnesota, but he spent a couple of decades in England starting in 1966, and he was heavily involved in the English New Wave SF scene at the time, along with another American, his sometime collaborator Thomas M. Disch. Somehow, though I always knew Disch was American, I assumed for a long time that Sladek was British. Anyway, we briefly discussed Sladek as an underrated writer on Greg Feeley's Facebook feed the other day, so it seems appropriate that on this his birthday I repost my review of a book that I received as a gift from Greg. 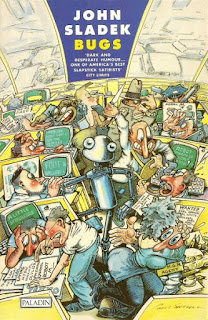 Bugs, from 1989, is one of Sladek's last novels. It represents him at his most darkly satirical. It's about a British man rather bewilderedly encountering the American scene: as such it reminded me of a couple of books by Amises: Kingsley's One Fat Englishman, and much more closely, Martin's Money, which is a near contemporary to Bugs. All those books are satirical, and Money shares with Bugs a truly bitter edge, though Money is longer, dirtier, more vulgarly over the top. (And I didn't like it as much -- it's not a book I like much at all, though I gather it is regarded by some as Martin Amis's best book.)

Bugs' story opens with Manfred ("Fred") Jones, a failed English novelist, trying to find the offices of Vimnut, a Minneapolis company for whom he hopes to become a technical writer. When he finally finds it (this having been complicated by among other things the company having changed its name) he is hired, after certain mixups, as a software engineer. (I am of course a software engineer, and these aspects of the book were pretty funny and fairly true to life.) It seems that his resume was confused with that of Mansour Jones, a black man fully qualified for the job. Fred is afraid to complain that he isn't qualified, and it soon appears that that doesn't matter.

Fred's department is charged with developing a robot officer for the military. His coworkers are variously completely insane, completely idiotic, or simply burnt out. Somehow the robot still manages to get built, though in the manner of numerous Sladek robots (robots were probably his chief SFnal device) it turns out to be murderous in a very funny way.

Fred himself has more significant personal problems to deal with. His wife has left him because she can't stand America. This doesn't seem to affect his sex life much: before long he has three women on a string, without really trying: a Russian spy, the sex-mad wife of his boss (who keeps asking him to imitate different famous Englishmen), and a beautiful co-worker with whom he falls immediately and desperately in love, to her initial feminist disgust. Fred also keeps getting fired and rehired, he somehow never gets paid by the company, Mansour Jones hounds him about stealing his rightful job, his insane co-worker tries to kill him ... and of course when the robot escapes he's really in trouble.

It's a very funny, very dark book. All ends terribly -- though in a way that seems, if not pasted on, not really necessary -- the ending could have plausibly gone quite differently, and many writers (Kingsley Amis probably, but not Martin Amis) would have resolved it more happily. But that's not Sladek's way, for sure.
Posted by Rich Horton at 7:46 AM