Tooth and Claw, by Jo Walton

My friend Jo Walton turns 54 today. We've known each other online since the halcyon days of the Usenet newsgroups rec.art.sf.written and rec.arts.sf.composition back in the late '90s, and in person since Chicon in 2012. Recently I was fortunate to visit her in her town, Montreal, when she hosted a wonderful convention, Scintillation. I was thrilled to able to follow her evolution from an aspiring writer to a published writer to a winner of multiple awards, and I've reprinted some of her short fiction in my Best of the Year volumes.

Besides her best known novels -- the Hugo winner Among Others, the scary alternate history Small Change trilogy, beginning with Farthing, about a fascist England at the time of the Second World War, and her philosophical Thessaly trilogy about a project to create a city based on Plato's Republic -- I really like two of her lesser known novels: the World Fantasy Award winner Tooth and Claw; and the Mythopoeic Award winner Lifelode. I haven't written about Lifelode, but here's what I wrote about Tooth and Claw some time ago.

Tooth and Claw, Jo Walton's latest novel, is something quite different than her first three -- it is a fantasy set in a world in which dragons are real. And its plot is based on Anthony Trollope -- specifically Framley Parsonage. With the details of dragon physiology and culture cleverly molded to fit the Trollopian view of Victorian England. 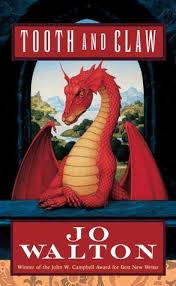 One lack in Walton's first novels is wit, and any sense of lightness. To be sure the novels are all to an extent tragic in outlook. At the same time, though, Walton seems so immersed in her imagined world that she doesn't want to play with it at all -- the books are quite earnest in tone, often a bit too earnest, or even ponderous. But those who are familiar with Jo's Usenet postings (though alas of late she has abandoned Usenet for the Livejournal world) know that she can be very witty. (See her "Calamity Jane Austin" page for example.) Tooth and Claw, happily, is abundantly witty.

The novel opens as the old dragon Bon Agornin is dying. His son Penn, a clergydragon, hears his confession -- which is controversial according to Penn's religion. (It harks of the Old Religion -- setting up a conflict analogous to Victorian Era attitudes of Anglicanism towards Catholicism (and possibly a bit towards Methodism and other dissenting sects).) Bon's confession includes a shameful secret about his rise from a poor dragon to wealth and relative social standing. Then Bon dies, and his body is divided according to tradition, with his heirs each eating a portion. It seems that dragon meat is magically useful to dragons, allowing them to grow and thrive. However, against Bon's apparent wishes, his son-in-law, the Illustrious Daverak (equivalent to perhaps an Earl?), takes a large portion for himself and for his dragonets. This enrages Penn and his younger sisters and brother, and sets in play the main motivating force of the plot -- a lawsuit that Penn's brother will bring against Daverak.

Bon Agornin's children are the already mentioned Penn, Daverak's wife Berend, another son, Avan, who is establishing himself a position in the Civil Service, and two maiden daughters, Selendra and Haner. Penn has a living with a very high ranking dragon family, the Benandis. He is able to take in one sister, Selendra; but Haner must go live with the unpleasant Daverak. Daverak's bad nature consists of such things as abusing his traditional right to cull weaker dragons (for their meat), forcing his wife to get pregnant too often -- which can fatally weaken a female dragon, and mistreating his servants. This then is Haner's problem. Selendra's conflict is that her virtue is compromised by an oily clergydragon -- leaving it possible that she will not be able to get pregnant. Then it seems that the young Exalted Benandi (a Marquis?) is falling for her -- very much against the wishes of his stuck-up dowager mother. And Avan, back in the capitol city, has a live-in lover who has a couple of important and dangerous secrets of her own.

It all works out with the precision unwinding of the plot of a Victorian novel -- and in quite satisfying fashion. The real delights of the novel are the affectionately portrayed characters, the great fun Walton has mapping dragon physiology to her plot needs, and the wit. And small things like the offhand revelation of the origin of the name Yarge, which applies to the soft-skinned bipeds with whom the dragons have historically warred. I enjoyed Tooth and Claw as much as any novel I've read recently. It won the World Fantasy Award -- an award I am happy to endorse.
Posted by Rich Horton at 7:28 AM