Today is Lucy Sussex' birthday, and in her honor I have posted this brief review I did of her short 2006 collection Absolute Uncertainty, followed by three short extracts from my Locus column reviewing her short fiction.

A review by Rich Horton (from Locus, September 2006) 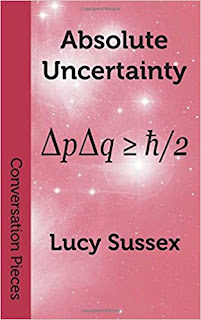 This collection from Australian writer Lucy Sussex is one of an intriguing series of short books from Aqueduct Press collectively called Conversation Pieces: brief books engaged in a “conversation” with feminist SF issues, including short fiction, essays, original and reprinted novellas and short novels, even a long narrative poem. Absolute Uncertainty is a collection of short stories dating as far back as 1994 and including some from 2006. The stories cover quite a range: some SF, some fantasy, some that could be called horror. “Absolute Uncertainty” is one of the better known, about a sort of virtual reality review of Werner Heisenberg’s life, particularly his controversial association with the Nazis, and his attempt to develop for Germany an atomic bomb. The new stories include “A Sentimental, Sordid, Education”, about a young man’s ambiguous sexual initiation, and an AI’s research into the wellsprings of creativity; “A Small Star of Cold”, a bittersweet ghost story about a much-loved “party facilitator”; and “Duchess”, a clever story about what seems to be the return of the notorious 17th Century woman Margaret Cavendish, Duchess of Newcastle, to the present day to comment (and blog) about fashion. “Kay and Phil” is a moving story imagining an encounter between Philip Dick and Kay Burdekin, a feminist novelist who wrote a spooky novel imagining the world after a Nazi victory, Swastika Night: possible source material for The Man in the High Castle. “Frozen Charlottes” concerns a couple rehabbing and old home who find some dolls that seem linked to a horrifying historical tale of a serial killer of poor children. And “Matilda Told Such Dreadful Lies” is a retelling of the real history behind the Australian song “Waltzing Matilda”, from a rather different point-of-view. The collection is capped with an interview with Sussex, conducted by Maureen Kincaid Speller. Fine stuff all around.

Some real neat stuff at Sci Fiction in February. It opens with Lucy Sussex's "Matricide", about a woman who locates and sells unusual objects. Her occasional boyfriend finds a strange doll, and two of her clients want to buy it, but he won't sell to them. She's also dealing with a difficult pregnancy – and she's unready or afraid of commitment. Then the disappointed clients take rather sinister steps to retaliate.

More online news … Two interesting new publications originate in Australia, both under the aegis (at least in part) of Alisa Krasnostein. New Ceres is a shared world project. The planet New Ceres is artificially maintained at an 18th Century tech level. There are hints in the two issues so far that this is a controversial aspect of their society, and that changes may be coming. My favorite stories so far, however, have been a couple of mysteries about an eccentric high-society woman, La Duchesse, and her secretary, Pepin, who has a secret of his own. In Lucy Sussex’s “Mist and Murder” (from issue 2) they investigate a potential haunting at the house of a man whose wife left him some time previously. The plot is clever enough (based on an early Australian story) but it is the characters La Duchesse and Pepin who make it work and who bid fair to return for many interesting adventures.

My favorites in the Australian anthology 2012 were “Apocalypse Rules, OK?” by Lucy Sussex, very amusing stuff about the real movers behind the various idiocies humans get up to
Posted by Rich Horton at 5:56 PM