Old Bestseller (Not!): The Confidence-Man: His Masquerade, by Herman Melville

Old Bestseller (Not!): The Confidence-Man: His Masquerade, by Herman Melville

Herman Melville (1819-1891) is now one of the canonical Great American Writers, known mostly for his novel Moby-Dick (1851), and a bit less for his first novel Typee (1846), and for his last short novel, Billy Budd, which was left unfinished at his death and was not published until 1924. In fact, Melville's career as a prose writer lasted essentially 11 years, from 1846 until 1857. Except for Billy Budd, his literary work the rest of his life was poetry, and while his books of poetry sold risibly in his lifetime, his reputation in that field has waxed enormously, and he ranks now, in critical estimation, perhaps third among American poets of his time, behind only Whitman and Dickinson.

While I have often heard it said that the failure of Moby-Dick ruined Melville's career, I don't think that's quite correct. No doubt the sales for that novel were disappointing compared to his very popular earlier books, but it still seems to have sold moderately well. The following three novels, however: Pierre; or, The Ambiguities; Israel Potter: His Fifty Years of Exile;  and The Confidence-Man: His Masquerade; were far less successful, both financially and critically. In particular, the publisher of The Confidence-Man went bankrupt, and it is doubtful that Melville was paid at all for the book. All those books were largely panned by contemporary critics. By the end of his life, Melville was regarded as a minor writer of sea stories. It was only beginning in the 1910s, and accelerating in the 1920s after the publication (and success) of Billy Budd, that his reptutation burgeoned. And while Moby-Dick is still regarded as his masterpiece, and a truly towering work of American literature, many of the other novels, The Confidence-Man perhaps most of all, have gained a significant place in the canon. 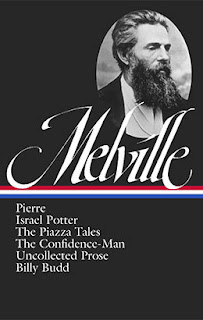 I have a copy of Moby-Dick, but while I will read it eventually, I just wasn't in the mood. And The Confidence-Man, a novel I had only barely heard of until recently, seemed fascinating. So I decided to make it the second piece by Herman Melville I ever read. (I read "Bartleby the Scrivener" as an assigned work in High School.) I read The Confidence-Man in the Library of America collection of his later prose work.

The Confidence-Man: His Masquerade was published on April 1, 1857; and the action of the novel is set on that same date. There is no question that the date was chosen with malice aforethought.
It opens as a man boards the steamer Fidèle in St. Louis. He seems mute, and displays a slate, rewriting quotations from 1 Corinthians 13: "Charity thinketh no evil", "Charity never faileth", etc. In contrast, a barber, who plies his trade on the boat, sets up his shop with the sign "NO TRUST". And we see that a reward is offered for a mysterious impostor.

All this actually sets up expectations, potentially, for a bit of plottiness. But the novel does not proceed this may. As the journey downriver continues, we are introduced to a variety of men, beginning with a severely crippled black man, begging for alms. He meets with resistance -- distrust -- and is defended by a man in mourning, with a weed in his hat. This man strikes up a conversation with a businessman, promoting the idea of confidence and trust in other people. And by the by he mentions an opportunity to buy shares in a certain company, rumored to be in distress.

And so the book continues, with a variety of individuals appearing and disappearing, with one person usually speaking -- at length -- with another, urging confidence in and charity towards one's fellow man. And often somewhat obliquely suggesting an investment, or a loan, or the purchase of an improving medicine, or some other scheme. Both sides of the conversations are presented with force -- the men (or is it one man?) urging confidence, and various people professing skepticism. Certain longer stories are offered, one about Colonel John Moredock, the Indian hater; another about the ill effects of accepting a loan, etc. The barber professing "No Trust" is debated.

This continues through the course of the day, as the boat passes Cairo and heads further down the river. We soon realize that the conversations are the point of the book -- the constant debate between seemingly virtuous "confidence" in others -- clearly, however, from the mouth of a "confidence man", who appears to (with indifferent success) be attempting to swindle the passengers -- and a more skeptical attitude, a more individualistic approach to life. 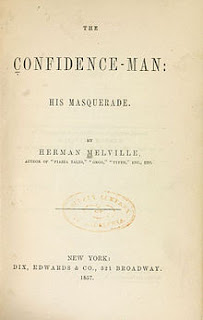 If nothing happens, if no plot emerges, it doesn't matter. The book is almost mesmerising at times. It's a remarkably modern-seeming novel in design, and in aim. Melville's prose is not, I suppose, modern -- it's of the 19th century, but vigorously his, not like any other writer. The sentence are very long (often occupying whole paragraphs), and they demand careful reading, but also reward it. The book seems engaged in portraying the American character, as Melville saw it, and from none too happy a vantage point. It is quite a remarkable performance, a striking and completely original novel. And often quite a funny one.