Peter Dickinson was born 91 years ago today, and died 3 years ago today. He was an exceptional writer of mysteries, of SF, of Fantasy, and of YA literature. I discovered him fairly young through his Inspector Pibble mysteries, beginning with The Glass-Sided Ants' Nest; and soon after was surprised to see his Changes YA SF trilogy in the bookstore. Soon I was reading SF novels such at The Green Gene and The Poison Oracle; and then his Alternate History Mystery series, starting with King and Joker.

The reviews below are of his late "Elemental" story collections, including stories both by him and by his wife, Robin McKinley. These were lovely stories, somewhat Young Adult in nature. I reviewed Fire for Fantasy Magazine, and I've appended my brief look at Earth and Air from Locus. (Alas, I never wrote about Water.) 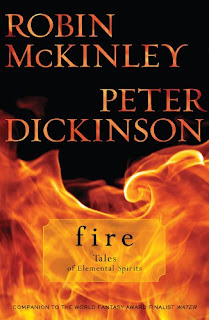 Husband and wife Peter Dickinson and Robin McKinley have separately each had remarkable writing careers. This is the second book they have done together, collaborating on the book but not the individual stories. The two longer stories here are by McKinley, the three shorter ones by Dickinson. All are Young Adult fantasies, about “fire spirits” of various types, such as a salamander, a phoenix, and a dragon.

The book is very enjoyable, its varied nature enhancing the pleasure. Dickinson opens the book with “Phoenix”, in which a young girl fascinated by nature encounters a boy of a similar age in a private preserve. She soon gathers that the preserve belongs to the boy’s family, and she gains his approval and explores it with him. Eventually she learns the real story, which is quite strange, and which involves, of course, a phoenix, and rebirth, as well as an unusual and quite sweet love story. Dickinson’s other two stories aren’t quite as effective. “Fireworm” is set in a prehistoric community menaced by the title creature, which burns its way into their cave. The hero is an outcast, because of his illegitimate birth, who is gifted in a dream the strange path he must follow to vanquish the fireworm. It is all quite interesting, but never really connects. “Salamander Man” is about another outcast, a boy who is the slave of a woman selling magical objects. She is a fairly benevolent owner, but cannot resist when a magician insists on buying the boy. Magicians have a bad reputation, but this one has a different fate in mind for the boy. Again, the working out is quite interesting – the problem here is that we are told too much, not shown. It might have worked better at twice the length.

McKinley’s stories are more character-oriented, perhaps more traditional YA. “Hellhound” tells of Miri, a girl just out of high school, who loves horses and never wants to leave her parents’ farm and riding stable. She loves dogs too, but only on graduation can she persuade her mother to let her adopt one, and she ends up with a very strange dog indeed. Well, the title gives it away, but this is, we learn, a good hellhound. Which is revealed engagingly when Miri’s brother and his girlfriend run into trouble at a haunted graveyard on their property … The fantastical element here, while real, is secondary to a set of delightful characters.

And my favorite story is the longest, “First Flight”, nearly a novel. Ern is the third son of a carpenter, who wants his sons to fit traditional roles. That means the eldest will be a dragonrider, the second a spiritspeaker, and the third a wizard. The story turns on Ern’s character – he is convinced that he’s a clumsy bumbler, and he is half-ashamed that his forte seems to be healing, for some reason a disparaged art. He also loves animals, and has made a pet of a sort of dog/dragon hybrid … And then he must accompany his oldest brother to his brother’s first flight on a dragon, which exposes him (and us) to the wonders of the majestic dragons, and their curious method of flying (something like spacewarps, I thought …). The shape of the whole thing is clear from the start, but it’s so perfectly executed, and Ern is such a well portrayed first-person protagonist, that I was enthralled.

This is a wonderful blending of talents of two writers who have already given us some of the best YA fantasy of the past few decades. Recommended. 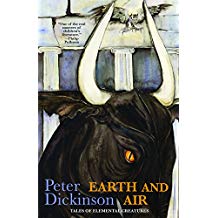 Last month I mentioned Peter Dickinson's “Troll Bridge”, which appeared in F&SF and also appears in his new collection Earth and Air, subtitled Tales of Elemental Creatures. The stories are all quite enjoyable. I particularly enjoyed “Ridiki”, a version of the Eurydice story substituting a boy's beloved dog Ridiki for Eurydice, and “Wizand”, which cleverly portrays the unusual lifecycle of the wizand, which confers power on witches, including in this story a 20th century girl named Sophie. Most intriguing, perhaps, is the final story, “The Fifth Element”, which doesn't as obviously deal with an “elemental creature” as the other stories. Instead, it's an odd science fiction horror story, that reminded me of Philip K. Dick's first published story, “Beyond Lies the Wub”, and well as Robert Sheckley's “Specialist”, in telling of the multispecies crew of a sort of tramp starship, and what happens when their “ship's Cat” dies.
Posted by Rich Horton at 7:58 PM