Birthday Review: A Buyer's Market and At Lady Molly's, by Anthony Powell

Birthday Review: A Buyer's Market and At Lady Molly's, by Anthony Powell

Anthony Powell was born 21 December 1905, and he died in March of 2000. He was of the lower reaches of the English upper class, though he eventually married the daughter of an Earl (Violet Powell, sister of the notorious Lord Longford, and niece of the great Fantasy writer Lord Dunsany.) He attended Eton (one close friend was Henry Yorke, who wrote his novels as "Henry Green", one of the most interesting and original writers of the 20th Century), then Oxford. After graduation, he worked for the publisher Duckworth, briefly worked in movies, and wrote five rather interesting novels. He did not write during the War, instead serving in the Intelligence branch (though not as any sort of spy). He began publishing the work for which he is famous, a 12-volume novel collectively called A Dance to the Music of Time, in 1951, and put out a volume every 2 years or so until 1975. During this period he also wrote reviews for Punch, and later for the Daily Telegraph. A couple of later novels followed Dance, and in addition he wrote a couple of minor (but interesting) plays, and all of one (1) short story. Late in his life he published his memoirs in four volumes, and three volumes of journals.

This is what I wrote about A Dance to the Music of Time as a series, some while back: 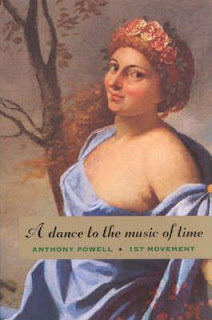 A Dance to the Music of Time is an extremely absorbing and well-crafted novel (composed of 12 smaller novels). Its subject is the decline of the English upper classes from the First World War to about 1970, a decline seen is inevitable and probably necessary, but somehow also regrettable.
Such a description might make the novel seem stuffy, but it is not. A Dance to the Music of Time is at times very funny indeed, and always interesting. always involving. It features an enormous cast of characters, and Powell has the remarkable ability to make his characters memorable with the briefest of descriptions. In addition, Powell's prose is addictive: very characteristic, idiosyncratic, and elegant.

The long novel follows the life of the narrator, Nicholas Jenkins, from his time at Eton just after World War I to retirement in the English countryside in the late '60s. But Jenkins, though the narrator, is in many ways not the most important character. The comic villain Widmerpool, a creature of pure will, and awkward malevolence, is the other fulcrum around which the novel pivots.

Here are two blog posts I wrote, upon rereading the second and fourth volumes:

A Buyer's Market, by Anthony Powell 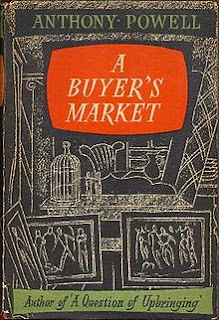 The first volume of A Dance to the Music of Time, A Question of Upbringing, was basically about "school", with a couple of chapters set at Eton, a chapter set in France the summer between finishing at Eton and going up to Oxford, and a chapter covering Oxford.  This second volume, then, covers the first few years following graduation from Oxford.  The basic subject is young love, I suppose, looked at, as ever with Powell, from a wide variety of viewpoints, different characters and different situations.  The narrator of the series, Nick Jenkins, is famous for telling little about himself, in general, over the scope of the 12 books.  But in this volume, perhaps more than most, he is a major character, and his first essays at relationships with women are pretty  central to this book.  But of course many other characters are described as well.

This book is unified by the character of Edgar Deacon, an aging painter of noted incompetence, and an acquaintance of Nick's parents, and thus of Nick himself.  Mr. Deacon, as Nick calls him, is by the time of the book's action no longer painting: he is running an antique shop.  The book opens with one of Powell's gorgeous set-pieces, wherein we see first Jenkins at some future date at a gallery auction, as some of Mr. Deacon's paintings are sold "the whole set knocked down for a pound".  (Obviously, Deacon's paintings are subject to a "buyer's market".)  This is possibly the same time as the opening of the entire sequence, which I would put in 1949 or so, but others might place in 1970, right at the end of the series.  Anyway Nick is prompted to remember his encounters with Mr. Deacon when a child, then a certain painting of Mr. Deacon's that hung obscurely in the stairwell of the Walpole-Wilsons' house.  The Walpole-Wilsons, we soon gather, are where Nick's first adult "love" lives: she is their niece, Barbara Goring.  Nick's reminiscing seems to spiral in, covering nicely his whole period of "dating" Barbara, then zooming in on a critical dinner party, prior to a dance at the Huntercombes.  This dinner and dance, at which time Nick realizes he know longer cares about Barbara, are the centerpiece of the first very long chapter.  The second chapter then covers a late-night party attended by Nick after the dance.  Nick is surprised to find Kenneth Widmerpool at the Walpole-Wilson's dinner, and later surprised even more to realize that Widmerpool also had designs on Barbara Goring.  All this ends, though, with one of the most famous scenes in the whole sequence, in which Widmerpool so annoys Barbara that she is provoked into trying to "sweeten him up" with some sugar, in the process accidentally dumping an entire sugar caster over his head.

The later party, at Mrs. Milly Andriadis' house, leads to re-encounters with such critical characters as Stringham (Nick's Eton friend), Mr. Deacon, and the Oxford dean and influence-peddler Sillery.  Perhaps more critically, we are introduced to the powerful industrialist Magnus Donners, employer of Stringham and soon also of Widmerpool.  Here many more permutations of love affairs are covered: Baby Wentworth, who was "involved" in the divorce of Stringham's older sister, is pursued by Donners, by the Balkan Prince Theodoric, and (it turns out) also by Mr. Deacon's tenant, the painter and womanizer Ralph Barnby, who becomes one of Nick's best friends.  Bijou Ardglass is also pursued by Theodoric.  Mr. Deacon brings his radical associate Gypsy Jones, who soon ensnares Widmerpool (and later is Nick's own first sexual "conquest").  Mr. Deacon himself, I believe (it's not perhaps clear), is shown in what I interpret as the aftermath of a lover's quarrel with a male singer, Max Pilgrim.  Stringham is currently Mrs. Andriadis' lover, though Nick had thought him engaged to Lady Peggy Stepney, one of the "beauties" of Nick's dinner party set. In a key line, Mr. Deacon reveals to Nick that Gypsy Jones is "in trouble".  Later in the book we learn that Widmerpool was tricked into solving her trouble (procuring an abortion for her, apparently in the mistaken belief that he was responsible).

At Lady Molly's, by Anthony Powell 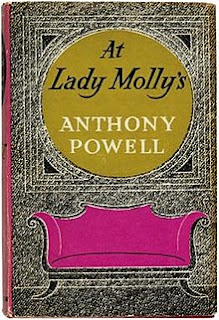 Book 4 is At Lady Molly's.  This is set around 1934.  The title character is an eccentric woman, perhaps 10 years or more older than Nicholas Jenkins, formerly married to the Earl of Sleaford, now married to a curious WWI veteran, obscurely injured, named Ted Jeavons.  "Lady" Molly Jeavons and her husband host parties with a rather wide-ranging guest list.  Nick finds himself at one in the company of one of his fellow screenwriters, Chips Lovell.  Nick and Chips are writers for the "quota quickies" -- at this time British film companies were required to release one British film for every Hollywood film they imported.  (As with much of Jenkins' life and career, this is autobiographical for Powell.)  The book continues, very loosely organized around a series of parties at Lady Molly's, along with other encounters, such as Nick running into Ted Jeavons in a bar.  It was only apparent to me on second reading, but to a large, though somewhat subtle, extent this book is about Nick's courtship of Isobel Tolland.  The book opens with Nick hinting that he is just about over Jean Templer Duport, who was his love interest in the previous book, and there is a mention (rather a famous line among Powellites, actually) of much of Nick's time being spent on line at cinemas with different girls.  But right from the first party at Lady Molly's Isobel's presence begins to be felt, even when she is not there.  The Tolland family are vaguely connected to Lady Molly (and indeed the Jeavonses are borrowing the Earl of Warminster's butler, Smith, as the story begins -- Warminster, who I believe to have been partly based on Lady Violet Powell's brother Lord Longford, a notorious Leftist peer, is the eldest Tolland brother, and officially head of the family after their father's death, though they still call him Erridge, after his cadet title (Viscount Erridge).)  A couple of Tolland sisters show up at this party, but Isobel is not one of them -- nonetheless, at the mention of her name, Nick feels a frisson of sorts (though he has not met her).

Anyway, the main action of the book follows a couple of strands.  One is Widmerpool's engagement to Mrs. Mildred Haycock, a rackety widow is also somehow connected with Lady Molly.  Mrs. Haycock is also the much younger sister of Mrs. Conyers, the wife of General Conyers, one of the most generally admirable men portrayed by Powell -- a hero of the Boer War, a very competent and interesting man.  (Indeed, this book introduces two of my favorite minor characters in the series: Conyers and Ted Jeavons.)  The other is the relationship of Erridge and Nick's old friend J. V. Quiggin, now married to Mona (who was formerly married to Nick's longtime friend, and Jean Templer's brother, Peter Templer.)  Nick spends a weekend with J. V. and Mona at a cottage owned by Erridge.  Erridge shows up, and at first Quiggin wishes to discuss the political magazine he wants him to fund, but before long it's clear that something is about to happen between Erridge and Mona.  And at a visit to the Warminster estate, Thrubworth, Isobel Tolland and another sister show up, and Nick decides on sight that he will marry Isobel.  Elsewhere Widmerpool is agonizing over the prospect of a weekend with Mrs. Haycock, at which he fears he will have to prove his sexual mettle.