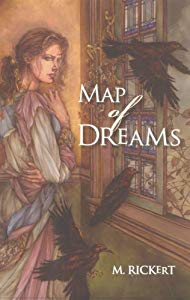 Today is the birthday of the exceptional writer Mary Rickert, who publishes as M. Rickert. Certainly her short fiction deserves celebration on this occasion -- so here's a compilation of some of my Locus reviews, plus a brief review of her collection Map of Dreams that I did for Fantasy Magazine.

The cover story for the August F&SF is M. Rickert's "Leda", a clever modern-day retelling of the story of Leda and the swan: what if a swan really did rape a contemporary woman?  How would she, and the rest of the world, react?  It's nicely told, with an effective variety of voices and tones.

F&SF for August ... Best this month, though, was M. Rickert's "The Chambered Fruit", a ghost story. An artist's daughter is abducted and murdered by a man she met under a false guise on the Internet. The heart of the story is the mother's battle with grief, and her involvement with an odd girl who claims to hear from the dead daughter's ghost.

SCI FICTION for August ... Better is M. Rickert's "Anyway", about a single mother with a son ready to join the military, her dying mother and cranky father, and her memories of her beloved brother who was murdered young. Her mother has a family history about sons and going to war and saving the world and guilt – and a choice no parent should have to make.

The May F&SF includes a couple of striking dark stories. One of the best stories of 2006 is M. Rickert’s beautiful horror story “Journey Into the Kingdom”. The story is well-framed, to begin with: a young man at an art show reads a journal/story accompanying a painting. The story tells of a girl growing up as a lighthouse keeper, whose father’s ghost returns again and again, often with other ghosts. She falls in love with one of the ghosts, who tells in turn his story, of an attempt to escape his jealous father, which leads to both father and son dying. The son reveals that he is a special ghost, who comes to life via the breath of mortals: best obtained by a kiss. And it seems that this girl – the artist, we gather – has become one such ghost. But of course this is just a story. Back in the initial frame, the gallery visitor falls for the artist, who seems resistant to his advances. Perhaps she doesn’t want to steal his breath? And then the story takes another dark turn – and another. This is lovely work, beautifully written, fascinatingly imagined, and resolved with that perfect touch of ambiguity that, done right, perfectly enhances a certain sort of contemporary fantasy.

December’s F&SF features as usual a Christmas story – quite a different one – for one thing, it is also a Halloween story. M. Rickert’s “The Christmas Witch” is another outstanding piece from this wonderful writer. Rachel Boyle and her father have moved to a small Massachusetts town after her mother’s death. Rachel learns some stories about Wilmot Redd, famous in the town for having been executed for witchcraft. She begins to collect bones, and makes friends (of a sort) with a boy she stays with after school. But Rachel seems in contact with some variety of real witchcraft – more real than anyone else will credit. Rickert, as ever, takes the story in unexpected directions, often uncomfortable, quite spooky and convincing.

M. Rickert’s “Memoirs of a Deer Woman” is another first rate piece, quite simply described: a woman becomes a deer, and her husband follows her as best he can. I can’t say much more – Rickert’s prose and insight make the story work.

And finally, I find myself a bit behind in covering Subterranean magazine, after its online migration. First I should note the final print issue, #7, guest edited by Ellen Datlow, which has in particular a strong M. Rickert story, “Holiday”, about a man whose father was convicted of child abuse, and who is writing a book absolving his father – but who is haunted by a young girl who seems to be an abuse victim. The story turns darker and darker, and we aren’t sure in the end how deep the stain of child abuse has spread.

M. Rickert’s “The President’s Book Tour” probably reads as SF to most, as it seems to be set in the future, a future in which a devastating war has caused all the children to be deformed, vegetation to be killed, etc. But the manner of telling – the tone, and the almost fable-like disconnection of the setting – reminded me very strongly of Emshwiller.

Review of Map of Dreams for Fantasy Magazine

M. Rickert is easily one of the most exciting new writers to appear in the fantasy field over the past several years. Her stories are lyrical and odd, often myth-derived, often intriguingly framed. Story collections for new writers who have not yet published a novel used to be rare but they are common these days – sometimes such collections seem too early, but for Rickert such a collection is if anything overdue. And indeed in a sense she has now published a novel: the title story, new to this collection, is novel length at about 40,000 words. (“Map of Dreams”, along with several vignettes also new here, serves as a curious sort of frame for the book – appropriate as Rickert is a contemporary master of the frame story.)  It is an absorbing and moving story of a woman overcome by grief after her daughter is murdered by a sniper. Her marriage collapsing, she follows the husband of another of the sniper’s victims to Australia, convinced that he has learned time travel. This is fine work, but the resolution is a bit too pat, and over its length it loses some focus. But this book also includes some truly outstanding shorter works, beginning with her first published story, “The Girl Who Ate Butterflies”. Other favorites of mine include “Anyway”, about the agony of a woman whose son is about to join the military, and the terrible choice she is offered; and “The Chambered Fruit”, a bit reminiscent of “Map of Dreams” as it tells of a mother battling with her grief about her murdered daughter, and the effect on her of a girl who claims to hear from the daughter’s ghost; and “Angel Face”, about a supposed image of the Virgin, and a boy taken with a skeptical girl. Rickert also takes on the story of Leda and the Nativity Story in unusual ways. This is an essential collection by a superb writer.
Posted by Rich Horton at 7:15 PM