Penelope Fitzgerald, one of my favorite writers, was born 102 years ago today. I discovered her in the early '90s, I think, as a result of a mention in connection with Kingsley Amis or Anthony Powell or someone similar. I immediately sought out everything I could find -- a bit of a trick back then -- and then in 1996 she published The Blue Flower, which made her a worldwide figure, 4 years before her death. But as you can see below, I bought my copy from the UK, in the early days of online bookstores. (I'm sure I paid a premium!)

I'm reposting this review, from way back in 1996, on the occasion of her birthday. And I should note that it's the second book called The Blue Flower I have reviewed on this blog -- a while back I covered Henry van Dyke's story collection with the same title.

The Blue Flower, by Penelope Fitzgerald

Penelope Fitzgerald is a rather well-known author in the U.K., having been short-listed for the Booker Prize four times and winning once (for Offshore (1979)). However, her books are harder to find in the States, and this one, her latest, has yet to be published here. (So thank God for online bookstores, Bookpages in this case!)

[The Blue Flower was of course soon published in the US, and attracted considerable approving notice.] 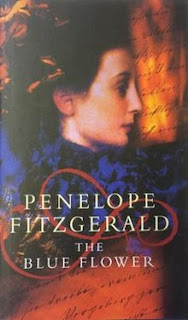 The Blue Flower is the story of the romance of Friedrich von Hardenberg, later famous as the German Romantic poet-novelist-philosopher Novalis, with a 12-year old girl, Sophie Von Kuhn. The story is told in brief chapters, from the points of view of several characters: Hardenberg himself, a female friend who may fancy herself a rival of Sophie's, Hardenburg's sister, Sophie's sister, and so on. The large cast of characters is wonderfully described, each character briefly and accurately limned, and all treated with humor and affection. In addition, details of how life was lived in 18th century Saxony are casually strewn throughout the book, and a very accurate-feeling picture of everyday life, and more importantly, how everyday people thought, is the result.

The main characters are odd but interesting: Fritz von Hardenberg is a young artist with Romantic attitudes: and at the same time realistically a brother and a son, and also a fairly conscientious apprentice salt-mine inspector. Sophie is a 12-year old girl of very little intelligence, and is unsparingly presented as such (indeed, her character is probably treated with less sympathy than any other in the book.)

As far as I can tell, every character in the book (at least every even moderately prominent character) is historical, though it is hard for me to be sure how closely Fitzgerald's characterizations resemble the historical record. Knowledge of the historical events depicted here casts a sort of pall over the events of the novel: we know that Sophie will die very young, and von Hardenberg not much later. (Novalis first became famous for a series of prose poems written in Sophie's memory ("Hymns to the Night"), and his major work, the novel Heinrich von Ofterdingen, was left uncompleted at his death.) Despite this pall, the book is funny, engaging, and beautiful in a delicate-seeming fashion.

Fitzgerald is one of my favorite authors. As I said, she seems to be less well-known in the US than elsewhere: and I'm not quite sure why. She does not seem overtly "English", for instance. The fine novels Innocence, The Gate of Angels and The Beginning of Spring do seem to be available here. [More recently, all of her novels have been reprinted in the U.S.] I recommend all her work highly. If I had to mention an author she resembles, it might be Anita Brookner, but Fitzgerald seems warmer than Brookner. Others have suggested Barbara Comyns, Barbara Pym, Elizabeth Taylor, and Muriel Spark (all, to be sure, British women authors of roughly her generation.)
Posted by Rich Horton at 5:21 PM