Traffics and Discoveries, by Rudyard Kipling

In honor of Kipling's birth, 153 years ago today, that is, December 30, 1865, here's a repost of something I wrote about his collection Traffics and Discoveries almost 20 years ago. My views of some of these stories have changed over time (in particular, every time I reread "Mrs. Bathurst" it seems stranger), but I've left what I wrote then unchanged. 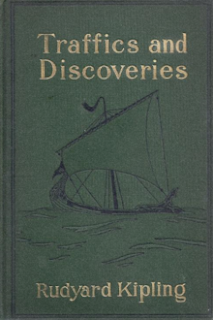 These eleven stories were written just after the Boer War was concluded, and some of them deal directly with that war.  Kipling, of course, was virulently anti-Boer in his views. Thus, he was both in favor of the War in a general sense, and often disgusted with the actual conduct of the war. The stories that deal directly with the war show this attitude quite clearly. These are "A Sahib's War", "The Captive", and "The Comprehension of Private Copple". On the whole, these are the weakest stories in the collection. Kipling's fierce feelings force him to preach, and that's always bad for a story. Moreover, his portrayal of the Boers often goes over the edge, particularly in "Copple" and "A Sahib's War". There are well done bits in these stories, but on the whole they haven't worn well.

Four of the stories are about an intriguing Naval person named Emanuel Pyecroft. Three of these are primarily humorous in intent: "Steam Tactics" (about a steam motor car and the nasty trick Pyecroft and co. play on an unfriendly constable), "'Their Lawful Occasions'" (about Pyecroft and co. having some fun during a Naval Exercise), and "The Bonds of Discipline" (about a plot to hoodwink a French spy whom Pyecroft and co. have found on their ship). These are solid, enjoyable, stories. The fourth is much more serious, and it's one of Kipling's legendary stories, and one of his best and strangest: "Mrs. Bathurst".  This is a famously hard to figure out piece about the title woman, an Auckland widow, and a sailor who apparently took up with her, not telling her he was married. In an ambiguous fashion, Mrs. Bathurst manages to haunt the sailor to his death. Very odd, and technically brilliant, and haunting.

Another odd, haunting, story is "'Wireless'". The narrator (who would seem to be Kipling) comes to a chemist's shop to witness an experiment with the brand new wireless telegraphy.  Amid an excellent explanation of the equipment, and description of the shop, we are shown another, much stranger, sort of wireless communication, as the consumptive chemist, yearning for a silly woman, channels the spirit of John Keats to recreate some of his great poetry.

Still another odd, haunting, story is my favorite of the book, another famous one: "'They'". The narrator stumbles on an isolated country house, occupied by a blind woman and a number of elusive children. Over the course of three spooky visits, the reader and narrator together come to learn the true nature of these children. It's a remarkable, atmospheric story, and of course heavily loaded emotionally when you think it was written not long after the death of Kipling's daughter.

I haven't mentioned "'The Army of a Dream'", a depiction of a rather unpleasant (to me) vision of a future England with compulsory universal armed service (and, it would seem to me, an obvious bit of source material for Starship Troopers);, and "Below the Mill Dam", a cute but kind of slight story in which anthropomorphic depictions of a mill cat, a mill rat, and the millwheel and millrace react to the coming of electricity.

This remains, I think, one of Kipling's very best collections.
Posted by Rich Horton at 9:03 PM