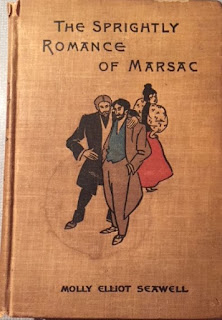 Molly Elliot Seawell (1860-1916) came from a fairly prominent Virginia family. Her Great-Uncle was President John Tyler. She was self-educated, but quite well, and she turned to writing about when her father died, when she was still fairly young. She supported her mother and the rest of her family with her writing income -- she wrote short stories, seafaring books for boys, articles, and other novels. She was fiercely proud of her ability to support her family with her writing income, and at the same time she was very traditional in her beliefs, and made a big splash with an essay called "On the Absence of Creative Faculty in Women". Her socially conservative views, and her Virginian upbringing, contributed to a fairly racist (in the paternalist sense) view of African Americans -- happily, the novel at hand, set in France, does not feature those views. She traveled extensively, in part in search of relief from her health problems, which contributed to her death at the young age of 56.

She was quite popular in her time, perhaps especially for books for boys, but she is all but forgotten now. The Sprightly Romance of Marsac was published by Charles Scribner's Sons in 1897, though it is copyright 1896. A note states that it obtained the first prize of $3000 for the best novelette in an 1895 New York Herald competition. The book is something less than 30,000 words, so it's possible the prize-winning novelette was the same length, though I suspect it may have been shorter. It is illustrated, quite nicely, by Gustave Verbeek. 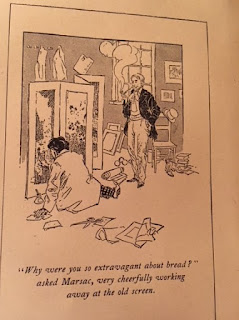 The novel is a very light and enjoyable piece of fluff. Marsac and his friend Fontaine are impecunious journalists. The opening shows them avoiding a series of importunations by their creditors, until Marsac is trapped by there imposing landlady, a widow named Madame Fleury. In something of a panic, Marsac, who is constitutionally opposed to marriage, deflects a proposal by the widow that he marry her in exchange for the forgivement of his back rent by instead suggesting Fontaine as the groom. So Fontaine ends up engaged to Madame Fleury -- but of course she is rather older than he, and anyway he is in love with one Claire Duval, the daughter of a wealthy tradesman.

Marsac promises to extract Fontaine from his engagement, but there is still the problem of their debts. His next scheme is to invent a rich uncle for Fontaine -- using Fontaine's real Uncle Maurice, who has emigrated to American, as the basis. They create a fake obituary for Maurice, along with the suggestion that he has left a couple million francs to Fontaine. And then they find that the mere expectation of an inheritance solves their money problems -- and also solves some other issues. Suddenly their artistic endeavors -- a play and a painting -- are in demand, as is Marsac's journalism, as long as it is signed by the presumably rich Fontaine.

And, too, M. Duval is suddenly much more accepting of Fontaine's attraction to his daughter. Marsac transforms their creditors, including a Madame Fleury, into nobility -- and all of a sudden M. Duval and Mme. Fleury are an item. Things are also going well for Fontaine and his beloved. And Claire's sister Delphine, a "New Woman" who is opposed to marriage, meets Marsac, and sparks fly -- the two are in desperate love immediately, but both are forced by their pride and their previously state views on marriage, to deny their attraction.

You can guess what comes next -- Uncle Maurice returns. Now what? If he's not dead, there can be no inheritance. And what of Fontaine's still extant "betrothal" to Mme. Fleury? And will Delphine and Marsac resolve their manufactured differences? Without their fictional inheritance and its benefits, how will Marsac and Fontaine pay their debts? Well, is their any doubt everything will work out? Of course not. Indeed, the resolution is rather too rapid, and somewhat anticlimatic. But the book as a whole, while nothing earthshattering, is for much of its length enjoyable fun, if totally implausible.
Posted by Rich Horton at 7:22 PM