Today is Claire Suzanne Elizabeth Cooney's birthday. She is one of the best, and also most sheerly enjoyable, writers working in our field today. She's also a friend of mine, so if you want to take my words with a grain of salt, do so -- but do so at your peril! Here's a compilation of most (but not all) of my reviews of her short fiction to date:

The best story from the online Summer issue of Subterranean is also dark fantasy, this time blackly humorous: “Stone Shoes”, by C. S. E. Cooney, about Jack Yap and his brother Pudding and their Marm and a skinchanger’s egg – linguistically inventive, and slyly vicious.

Belatedly I’ll catch up with Subterranean’s online offerings. From Winter my favorite is C. S. E. Cooney’s “Three Fancies from the Infernal Garden”, which plays ecstatic games with Russian fantastical traditions – a Scarecrow, the Firebird, Koshchei the Deathless, Baba Yaga, and lots of Ivans. Cooney is always gleefully imaginative, and very fun – with rather a sinister edge.

One of the latter is my favorite in Clockwork Phoenix 3: C. S. E. Cooney’s “Braiding the Ghosts”, in which a girl goes to her grandmother after her mother’s death, and learns from the older woman the secret of “braiding” ghosts – which is to say enslaving them. So ghosts are the servants of the older woman. But the girl is not so happy with this … especially when she falls for the ghost she is forced to braid. And the ghosts – are they happy? Read the story and find out … lovely stuff.

C. S. E. Cooney’s The Big Bah-Ha is a novella published as an ebook by Drollerie Press. It’s a very imaginative work, at once a stark post-apocalyptic tale and a strange, sometimes quite dark, but never dour, afterlife fantasy. Beatrice is the leader of a small children’s gang in a world of only children – a disease called the “slaprash” kills everyone at about puberty (meaning, of course, that the end of the world is less than some dozen years away). Then Beatrice comes to in a rather surrealistic environment. She must negotiate her new world – “the Big Bah-Ha” – with a strange clown and menacing Gacy Boys and so on. And back in the “real world”, the rest of her gang vows to confront one of the Tall Ones, the Flabberghast, and beg for help to find Beatrice. Cooney’s imagery and invention is as fevered as always with her work, and her control of tone is perfect – this is a terribly sad future but the story is never morose, always oddly hopeful, even as the ending is uncompromising but still oddly hopeful.

Strange Horizons for March features another strong piece from C. S. E. Cooney. “The Last Sophia”, about a girl enslaved by “the Gentry” to breed children for them – at any rate, she’s under someone’s control, if not the Gentry then her mother or an Aunt, and the story turns on her efforts to escape.

I really like the work of C. S. E. Cooney – one of the really gifted young storytellers we have. At Giganatosaurus for May she contributes “Martyr's Gem”. Shursta Sarth is a poor fisherman, not much of a catch, living in a small village on the Last Isle with his lame sister. He is then shocked to be chosen for “meshing” by Hyrryai Blodestone, a daughter of one of the most prestigious families on the Last Isle, living in the capital city . Hyrryai's reasons are at one level predictable – her sister was murdered, and her only interest is finding the killer, but her culture's mores demand she “mesh” (to preserve the species, after the Nine Cities fell beneath the sea). Well, we can see where this is going, mostly, and indeed it goes there – but the getting there is a delight, partly in the world-  and culture-building, and mainly in the telling, and especially in the voice of Shursta's sister Sharrar.

The Witch's Garden series is an ongoing set of somewhat erotic tales from C. S. E. Cooney. One appeared in Strange Horizons, and another longer one  is available in electronic form at Amazon: The Witch in the Almond Tree. Mar is a very talented witch at the Conservatory of Spellbinding and the Beguiling Arts in Doornwald, with a boyfriend she likes and who is good in bed (but who also likes lots of other girls and boys), and good marks at school, but not much money. So she agrees to visit her mother, with whom she has a tense relationship, and her mother's new husband, for one summer, to save money and to help her sometimes careless mother. When she gets there she finds the new husband a nice enough man, an almond grower; and she is quite taken with his son, who is about her own age. But something is strange about her mother … not to mention that her new stepbrother is confined to the almond farm by the spirit of his dead mother, plus the local tales of a haunted juniper tree. Soon it seems that some magical expertise might be called for – but is she up to it? Cooney is a natural storyteller with an easy way with her characters, and the story is a delight to read, with plausible and interesting magic (plausible in context), and with a tense and exciting plot. 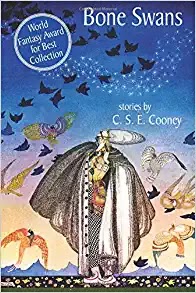 Bone Swans is a collection of five recent novellas from C. S. E. Cooney. All the stories are very good, and one of them is new to the collection: “The Bone Swans of Amandale”. This story is one of a couple in the book that takes as its basis a familiar fairy tale (here, “The Pied Piper of Hamelin”, elsewhere in the book “Rumpelstilskin”), but which changes it utterly. Maurice is a Rat Person hopelessly in love with Dora Rose, a Swan Person. (Being a clever and cynical rat, he copes pretty well though.) When Dora Rose's sister is murdered as part of a complex plot by the Amandale's mayor, who wants to make an orchestra of “bone swans”, Maurice decides something has to be done, for the sake of the swans, and indeed for the city's children, who are being misused as well in the mayor's service, so he goes to his friend, a reluctant piper. The Pied Piper story is all there of course, but just as a skeleton on which to hang multiple intersecting motivations. And the key is as ever the telling, and Maurice's voice.

I also liked a warm collaboration from C. S. E. Cooney and Carlos Hernandez, “The Book of May”, told in correspondence, about two old friends, one of whom is dying of cancer, and her last wish: to be planted and become a Dragon. The idea is fine, but the story works because of the voices.

I was fortunate to hear C. S. E. Cooney tease the first half of “Though She Be But Little” at Boskone last year, but I had to wait until the September/October Uncanny to find out how it ends. This is Cooney at her strangest, set in a world suddenly and weirdly altered, with a silver sky and stuffed animals named Captious and Bumptious and a parrot named George Sand – and Emma Anne, who must confront the dangerous Loping Man. It is weirder than I can describe, really, and funny without being quite funny at the core, and quite something.

Sword and Sonnet is an anthology devoted to “women or non-binary battle poets”, possibly a bit too specific a remit for a book, but still one that has engendered some impressive stories. Best here is “As for Peace, Call it Murder”, by C. S. E. Cooney. This is SF, not usually Cooney’s genre, but it’s strong work, about Quatromanni, a singer of protest songs against an oppressive regime. The story is told long after her death, when she is remembered as the War-Ender, even though she was captured and had her tongue cut out by the regime. But her songs lived, and how they lived is what makes the story.