Today is Robert Charles Wilson's 65th birthday. In his honor, here is my review of his most celebrated novel, Spin, which won the 2006 Hugo for Best Novel (and, later, the Japanese translation won the Seiun Award.) 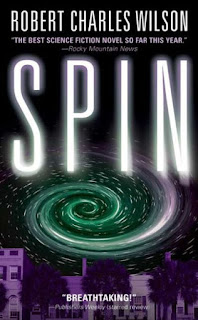 The first major SF novel from a major publisher in 2005 that I have seen is Robert Charles Wilson's Spin. Wilson is one of my favorite current writers. His recent novels have all been quite striking, and all are based on quite extravagant SF ideas, yet are markedly quiet in tone, and markedly character-based.

Beth Meacham recently complained that SF seems to consist largely of two sorts of books: very mainstream-style books with one modest SFnal idea; or very wildly SFnal books that demand from the reader an intimate knowledge of the field's tropes. Robert Sawyer vs. Charles Stross, one might suggest. Spin, I think, is a counter-example. It is based on a truly audacious central idea, and the idea is quite cleverly extrapolated -- its implications are nicely explored. Yet the heart of the book is an extended look at one man's lifelong friendship/love affair with his boyhood neighbors, a pair of twins, brother and sister; set in a near future not too terribly different from today.

The book alternates sections set, the titles tell us, very far in the future (4 billion A. D.), with near future sections. The narrator is Tyler Dupree, who is undergoing some sort of drastic medical treatment while on the run from U. S. officials. While mentally unbalanced by the treatment he compulsively writes down his memories of his life to date, beginning with the onset of what came to be called "the Spin". One night when Tyler is 12, and his twin friends Jason and Diane are 13, the stars suddenly disappear. Earth is somehow enshrouded -- satellites crash, the Moon is invisible, the Sun still shines but oddly changed. It soon becomes clear that a barrier, eventually called "the Spin", is affecting time oddly -- time outside it passes much more rapidly than on Earth. Space vehicles can be launched and pass through the barrier -- they seem to return instantly, but they observe time passing outside it, and they observe, for instance, the Solar System continuing to evolve, such that after some decades, the Sun will have changed so as to make Earth uninhabitable. Thus, people of Tyler's generation grow up in the knowledge that likely the world will soon end.

Tyler's mother works for Jason and Diane's father as a maid. E. D. Lawton is a powerful defense contractor who is smart enough to be in place to react quickly to the Spin -- for example by setting up a network of aerostats to replace the now defunct GPS satellites. His wife Carol is a former doctor, now an alcoholic. Tyler falls in love with Diane from an early age, but a combination of factors keep them apart. (Tyler's shyness, a perceived class or financial status difference, E. D.'s hostility.)

The book very successfully combines an involving small-scale story (the story of Tyler's relationship with the Lawton twins, and of the entire world in the shadow of apocalypse) with a fascinating large-scale SF story (the story of the Spin, its origin and the results of some decades of dealing with it). The first story is satisfying enough, but ultimately it is the extrapolations of the effects of the temporal disconnect between Earth and the rest of the universe that are most compelling. Wilson uses this as a way to look at "deep time" through the eyes of contemporary humans. As only a few years pass on Earth while millions of years pass outside the Spin barrier, it is possible to do really long-duration experiments. Some of these have downright cool effects -- I won't detail these here -- I'll leave the surprises to the novel. But Wilson does not cheat the reader -- we do learn pretty much what's going on with the Spin, and why. And it's neat stuff -- though I suppose just mildly less overwhelming than I might have hoped.
Posted by Rich Horton at 5:37 PM