Today is Nalo Hopkinson's birthday. In honor of that, I've resurrected a review I did on my SFF.net newsgroup back when it came out. (I've buffed it slightly.) 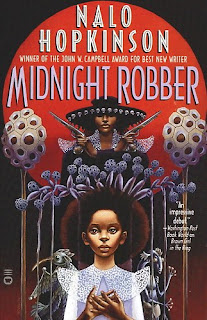 Midnight Robber appeared in 2000, and was a Hugo and Nebula nominee for Best Novel in 2001. is a pretty darn good book, with a couple of weaknesses.  The novel is excellent, with a convincing and involving main character, and a neat setting on an alien planet with cool aliens, and a solid plot involving the main character dealing with severe family issues and coming of age.

The story is about a girl from the planet Toussaint, called Tan-Tan. Toussaint is a highly technological planet: most of the work is done by machines, and everybody (except a few resisters) has an implant which connects them to a planet-wide AI. The AI monitors everybody as well as linking them to news and such -- thus crime would seem to be difficult, and when crime does happen, the criminals are treated harshly, exiled to a primitive planet called New Half Way Tree. Tan-Tan is the daughter of the Mayor of her town, Antonio. Antonio is a serial adulterer himself, but when he catches his wife in flagrante, he flies into a rage, and abandons she and Tan-Tan for several months, and eventually plots revenge against his wife's lover.  This crime leads to his exile to New Half Way Tree -- and more or less by accident, he takes Tan-Tan with him.  This whole first section is a bit slow, and to my mind not well enough integrated with the rest of the novel. Antonio doesn't seem well-portrayed -- and Tan-Tan's mother Ione is both an unpleasant and unnecessary character. Moreover it introduces a subthread about the anti-tech people on Toussaint (those who choose not to be linked to the AI, and who do their own hand work) which doesn't really go anywhere. Also, there is some mumbo-jumbo about the connection and means of transport between Toussaint and New Half Way Tree that was superfluous.  (There are bits about Tan-Tan's childhood and about the tech background to Toussaint that are important -- those could have been introduced in flashbacks, I thought.) But I am making a mountain out of a molehill.

Once Tan-Tan and Antonio get to New Half Way Tree, the book comes alive. They are met by an intriguing ostrich- or lizard-like alien called Chichibud, who guides them through some peril to a human village. The village is ruled harshly but apparently fairly by a couple of hard men. It seems that the aliens are regarded as rather simple by the humans, but they engage in mutually beneficial trade, and though there are mysteries, no human has time to investigate on this harsh planet. Tan-Tan grows up, making friends with the simple-minded daughter of another exile, and with a local boy. But her relationship with her father grows horrible, and she is driven to a terrible act as she turns 16. The rest of the book follows her into the wilderness, where she is saved by Chichibud and brought to his home, where she learns something of the secrets of the aliens (called douens) way of life. When her past comes to threaten the aliens as well, she leaves and wanders the bush with an alien friend. Soon she is the "Midnight Robber", trying to atone for her crimes and her guilt, some of which is misplaced, by acting as a sort of Robin Hood character in the various human villages.

Eventually Tan-Tan must find a way back into human society. I thought possibly some of the resolution was just a bit convenient -- also I thought the time scale to the book a bit compressed towards the end. But it remains exciting and interesting, and the resolution if convenient is still satisfying. There are some open questions about the human/douen relationship, but though a sequel is possible, it's not necessary.
Posted by Rich Horton at 5:25 AM