Birthday Review: In the Palace of Repose (plus additional stories), by Holly Phillips

Today is Holly Phillips' birthday. Beginning with "No Such Thing as an Ex-Con" in the Summer 2000 On Spec, Phillips published a string of remarkable stories (and two novels), with the last appearing in her collection At the Edge of Walking in 2012. She has been silent in the SF/F field since then -- I recall an interview in which she mentioned that she had returned to school, and was considering different fields of writing. So I'm not sure what her future writing plans are, but I eagerly await new work -- her stories were truly among the very best of the first decade of this millennium.

In honor of her birthday, I'm reprinting a review I did for Locus of her first collection, In the Palace of Repose, followed by a collection of my reviews of her stories in my Locus columns. 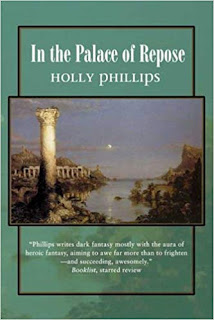 It is really exciting to see a debut collection of this quality. In the Palace of Repose collects nine stories, seven of them originals. Holly Phillips has not yet published a novel [two appeared since then], and relatively few short stories. She is also an editor at the fine Canadian magazine On Spec.

The title story caught my eye earlier this year in the first issue of H. P. Lovecraft's Magazine of Horror. This beautiful, atmospheric, story is set in a version of England, in which a bureaucrat is charged with maintaining the house (palace? prison?) in which a lives a magical King. In this new non-magical age the bureaucrat seems to be the only one who still believes in the King. His department ready for elimination, he visits the King one more time, only to find that a young woman has made her way into the King's palace. Who can she be? Lovely stuff. The other reprint is "The New Ecology", from the Summer 2002 On Spec – about discarded parts recombining to make living things.

There might be a suspicion among some cynical readers that original stories in a collection are likely trunk stories. More charitably, they might be viewed as more challenging or individual stories that the writer couldn't place with conventional markets. Or often enough a single new story is included just to reward buyers of the collection with a story they couldn't get anywhere else. All this is irrelevant to this book – the seven new stories, all fine to excellent work, suggest a writer who has found her voice and has too much stuff available to wait for magazine schedules. (And indeed in 2004 I saw at least four more stories by Phillips that didn't find their way into this book – in On Spec, Flesh & Blood, Black Gate, and Alchemy.)

I think the best new story here may be "By the Light of Tomorrow's Sun". A young man comes back to his island birthplace, to face his reclusive foreign-born grandfather and resolve a bitter mystery. The climax involves memories of his parents' death, which drove his grandfather mad with grief, the loss of a young neighbor girl at the same time, and the secrets of his grandfather's own people.

But that's just one choice of many. "The Other Grace" is a sensitive and believable story of an amnesiac. After losing her memory, Grace returns home, to a loving and supportive family, particularly her older brother. But she doesn't recognize them, and she doesn't recognize the girl they think they know. She is a new person now -- "the other Grace". Her confusion, her resentment, even, of her previous self, the befuddlement of her friends and family, her coming to terms with her new identity -- all are clearly, honestly, portrayed: not tragic, bittersweet.

Several stories deal with artists of one sort or another. "Variations on a Theme" intertwines the story of two women: Berenice, a music student in 1916, a brilliant pianist but held back by her teachers' attitudes about women; Brona is an older student in 2003, much more successful. What seems a fairly ordinary set of parallels resolves into something unexpected and haunting. "Pen & Ink" is the story of another artistic student, tying together her own abilities, her missing father's genius, and her mother's love and resentment with a series of unique thefts and hints of a magic. "Summer Ice" is about an art teacher, coming to terms with her new life in the city, her own art, her neighbours, perhaps a man.

Adding a fine piece of urban horror ("One of the Hungry Ones"), about a homeless woman lured to a phantasmogorical series of parties by a beautiful trio of "friends"; and an earnest story of a native woman helping with an anthropological dig, against her people's desires ("A Woman's Bones") rounds out a truly impressive first book.

Here are some other brief reviews of Holly Phillips' fiction from my Locus column (and elsewhere).

Holly Phillips's "A Beggar in Shadow" (Alchemy #2) does not seem to be fantasy at all, though in a couple of ways I was reminded of Ellen Kushner's Swordspoint, famously a non-fantastical fantasy. The narrator, Julian, is the companion of an older man, Mr. Desambouche, and is pressured by him to act as go-between in an attempt to seduce a beautiful young Duchess. But Julian too is attracted, unwillingly, to the young woman -- which leads to considerable danger and testing of loyalties when the jealous Duke interrupts an assignation.

Holly Phillips's "The Dead Boy" (On Spec, Summer) concerns a woman who sees ghosts and the troubled policeman she helps. He is in trouble for caring too much about one possibly murdered boy, but the protagonist, to her surprise, finds another way to help him.

The first issue of H. P. Lovecraft's Magazine of Horror is very promising. I really liked a story by Holly Phillips, "In the Palace of Repose". A bureaucrat in what seems to be a version of England visits a mysterious Palace, in which a magical entity he calls the King is imprisoned. On this latest visit he is shocked to find that someone else, a young woman, has found her way to the Palace. He brings her out, sadly expecting her to disappear into a governmental maze. But more to his concern he learns that his department is to be discontinued – it seems in this rational age that no one believes in this magical King any more. So he returns one more time, to find that something new awaits ... The story is quite beautifully written, coming to a satisfyingly expected resolution, effective both logically and emotionally.

Phillips’s “canvas, mirror, glass” (Fantasy Magazine #2) is an intense variation of a fairly familiar setup: a young artist in some sense under the sway of an older artist. But Phillips uses this situation very well. Isobel has become the mistress of a rich older patron, and he wants the alpha artist of their circle, Didier, to paint her, but she is reluctant. And she befriends Michelle, an older, somewhat frustrated, artist, who has been through a similar experience. The resolution is just a shade unexpected, and the story as a whole is emotionally convincing. (Though perhaps not really fantasy.)

One story this issue of Asimov's knocked me flat: Holly Phillips’s “Three Days of Rain”. It’s remarkable how much this story does by doing so little, in a way. The story is set in a drought-ridden future. A Spanish-flavored city is about to vote on whether to abandon their dry location. Santiago is a young man, a glassmaker, who has some friends above his social station. We get a brief look at his life: glassmaking, beginning swordplay, fascination with a pretty girl, fascination with the aristocratic leader of their circle – most of all, his love for his city. I can’t describe why the story works so well, but it does: it is beautiful, true, hopeful and sad.

Blog entry on the anthology Fantasy, edited by Paul Tremblay and Sean Wallace

My favorite story here was certainly Holly Phillips's "Brother of the Moon", from Fantasy. It opens with a "hero" and his sister in bed together in a war-torn quasi-contemporary city (I was reminded - intriguingly but not entirely accurately - of Iain Banks's A Song of Stone). Their war is lost, and one mysterious path forward remains, and eventually the hero chooses to take it, and proceeds to his ancestral home, for an act of sacrifice that entirely redeems the story if only ambiguously redeems his life.

At Fantasy Magazine for May Holly Phillips gives us another remarkable story, “The Small Door”. Sal’s sister Macey is dying of cancer, and she spends her time looking out the window. Their neighbor keeps various small animals in cages, and sometimes the animals disappear. Macey convinces Sal to go snooping, to figure out what evil the neighbor is up to. The answer is, of course, not what we expect – and the climactic line: “you see, it’s such a small door”, is a killer.

Holly Phillips continues to thrill me with her lyrical stories in which small moments loom large, in which small phrases glitter, in which small-seeming emotional elements shatter. “The Long Cold Goodbye” (Asimov's, March) seems almost an inverse mirror to her first Asimov’s story, “Three Days of Rain”, which featured a hot dry city facing potential abandonment. Here Berd, a native of a very cold Northern city, is preparing to leave her home as the ice has finally taken over, and the city becomes uninhabitable. In her dreamlike last walk across her city she searches out one childhood friend, while weirdly accompanied by fantastical ice sculptures of her other childhood friends. The story achieves a naturalistic feel – this seems like it really is happening, is not “story” somehow – and we are given a picture of a lost place – a place some time past colonized by foreigners, still inhabited by natives like Berd, and now to be abandoned by all. The place as portrayed is beautiful (partly due to Phillips’s prose) and the loss aches … and Berd’s prospective new life is also hinted at obliquely. Lovely work.

Holly Phillips goes from strength to strength. “Thieves of Silence”, at Beneath Ceaseless Skies, is a lovely tale of Zel, a thief who as the story opens invades a rich man’s house to steal enough to keep her and her lover from ruin. But the rich man’s daughters are witches, and Zel is captured – in more ways than one. Zel’s lover Gannet, meanwhile, schemes to land a rich husband – and so we have rich net of betrayal and maneuvering, shifting loyalties, unexpected emotional responses.
Posted by Rich Horton at 11:49 AM