Birthday Review: Heart of Veridon (and two other stories), by Tim Akers

Today is Tim Akers' birthday. Tim has been publishing intriguing dark fantasy, with a steampunkish feel to much of it, since 2004. This includes six novels, including two Veridon novels, a standalone called The Horns of Ruin, and a trilogy called The Hallowed War, which concluded with The Winter Vow this year. I reviewed his first novel, Heart of Veridon, for Fantasy Magazine, and I've reviewed a couple of his short stories at Locus. I've reposted these reviews here, for his birthday. 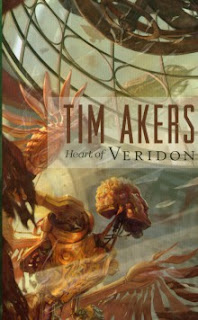 Heart of Veridon is Tim Akers’s first novel. He’s a native of North Carolina, now resident in Chicago, but he is probably not well known to many Americans, as the bulk of his short fiction has appeared in Interzone. His work had caught my eye, though, particularly a couple of short stories set in the same steampunk fantasy world as this novel: “The Algorithm” (Interzone, 2007) and “A Soul Stitched to Iron” (The Solaris Book of New Science Fiction Volume 3, 2009). This book realized the promise of those stories very nicely – though it is unmistakably a first novel, with the sort of flaws one expects in early work.

The narrator is Jacob Burn, disgraced scion of one of the Founding Families of Veridon. We meet him on an airship about to crash, as a petty criminal he barely knows gives him a mysterious “Cog” – a piece of clockwork that, it soon becomes clear, is desperately desired by several very different factions, including at least two different sides of Veridon’s ruling class, and also including some entities from well outside the city. Burn has become a petty sort of criminal himself, working in association with a whore named Emily for whom he has perhaps unwise feelings, and working for a mostly clockwork crime boss named Valentine. When his latest assignment, to deliver a package at the country house of one of his old Founder friends, Angela Tomb, goes pear-shaped he finds himself, along with Emily and a spider-like nonhuman named Wilson, on the run from the various groups chasing the Cog.

There’s plenty of action, well enough described but often a bit unconvincing. Jacob himself is nearly unkillable, but that’s effectively explained (he has been implanted with clockwork of his own, part of a failed (for interesting reasons) attempt to become an airship Pilot.) But too often the solution to problems is to shoot his way out, through quite a few supposedly competent adversaries. (Who do win, short term, on occasion, it should be said.) Much more interesting than the action is the setting, which as I said earlier is “fantasy steampunk”, and pretty pure steampunk – airships, clockwork people, the criminal element, and plenty of attitude. This is fun reading, and it ends up nicely underpinned by a gothic history for Veridon. The story’s arc promises tragedy, and we get that, with some hope, and some cynicism. Once senses that Veridon should be on the verge of a transformation, and that doesn’t really happen, but I think the slightly muted ending, if a bit disappointing, is also honest and realistic.

In the end, Heart of Veridon is an enjoyable novel, absorbing reading with plenty of color and action. The prose is mostly fine, if on occasion a bit too contemporary/colloquial for my taste. The setting is the real star. It’s not a perfect book, but it is a very promising debut.

In the March-April Interzone I also enjoyed a quite thoroughly strange story by Tim Akers, “A Death in the Wayward Drift”, about a young man, an initiate of the water caste, and the death by drowning of one of his fellows while trying to repair some sort of engine of water. Charged with the proper burial of the dead man, he journeys and encounters a young woman, an initiate of wood, with her own concerns about the strangely walking trees … It is, as I said, thoroughly strange, and very usefully so.

From The Solaris Book of New Science Fiction Volume 3, Tim Akers’s “A Soul Stitched to Iron” is set in a fantastical city – almost perhaps a “New Weird” milieu, with something like zombies – but again perhaps there is a baroque short of SFnal rationale to it. In the story a young man who has turned away from his highborn family to a life of crime returns to his birth environment to try to understand what’s driving a newly influential family in disturbing directions.