Junot Diaz turns 50 today. In his honor I'm reposting a review I did of his wonderful first novel. 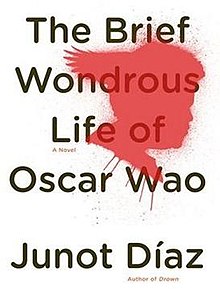 Junot Diaz won the Pulitzer Prize for Best Fiction of 2007 with The Brief Wondrous Life of Oscar Wao. (It's a pretty deserving winner, though I have to say I'd have given it to The Yiddish Policemen's Union myself.) Whatever the case might be, Diaz's book is very worthwhile -- energetically written, absorbing, angry, and sad. It is fundamentally the story of Dominicans in the 20th Century, as reflected in the terrible lives of the members of one family.

The title character is Oscar De Leon, a Dominican-American who grows up in Paterson, NJ. He and his older sister Lola live with their mother Belicia -- their father left when they were very young. Oscar is a smart kid and an obsessive reader, but he is not popular: partly because of the reading, more because of the kind of books he reads (SF and Fantasy) and his parallel obsession with fantasy gaming, and finally because he is very fat. Throughout his life he is bullied and made fun of. He is even more miserable because he tends to fall desperately in love with girls, girls way out of his league, and he has of course no idea how to talk to them.

The book follows his life, then briefly Lola's -- she is also intelligent, and at first obedient until she turns wild and runs away. She cannot deal with her controlling mother, and throws herself into some destructive relationships, before finding a talent as a runner, then finally doing well in college. There are also sections from the POV of another Dominican man, apparently a standin for the author (he's a writer nicknamed "Yunior") -- though it's always dangerous to read too much into descriptions of author-like characters. Anyway, Yunior is briefly Lola's lover, and then Oscar's roommate, but he serves as a sort of anti-Oscar as well: fabulously successful with women (if often rather superficially), and as a writer purely realist.

There is also a vital long section detailing Belicia's difficult life: she is orphaned early, kept for years as basically a slave, then rescued and raised by a virtuous aunt, until her post-pubescent maturing brings her to the attention of boys (and vice-versa), leading to eventually disastrous relationships with the likes of a rich boy at school, and later a henchman of the Dominican dictator Trujillo.

In the end, this story is at heart, as I said, about the terrible history of the Dominican Republic, most particularly under the grotesque rule of Trujillo. (To be sure, the US does not escape criticism in this matter.) It is also of course the story of the Fall of one once prosperous family -- and finally the story of the doom of Oscar, a good but hopelessly naive young man.

In many ways this is an almost unbearably sad book. Yet somehow the reading isn't like that -- Diaz is such an energetic writer, and he is often bitterly funny while telling his tale. Also, Oscar is (especially for, well, geeks like us) an affecting character -- a good guy, with good taste -- somebody to root for. Definitely a first rate novel.

As for the direct appeal to SF/Fantasy writers, there are two aspects. One is that the book does have a slight fantastical (or Magical Realist) dimension. The other -- in a lot of ways more interesting -- aspect is the offhand, and utterly believable, references to Oscar's obsessions and reading -- he namedrops not just Tolkien (as in Oscar wanting to be the Dominican Tolkien) but Norton, Butler, Le Guin, and many more, and in such a way as to convince me that Diaz has actually read the stuff, not just done the research.