I've previously reviewed E. Phillips Oppenheim's most famous book, The Great Impersonation, in this blog. But today is the 152nd anniversary of his birth, and a while ago I read another of his books, so I thought I'd post a review here. This one is actually SF, and in a way kind of prescient: in about 1924 it predicts an alliance between Germany, Russia, and Japan in about 1940, plotting to start another World War. So I couldn't resist it, though it's not as fun as The Great Impersonation.

E. Phillips Oppenheim was a very prolific and successful writer of thrillers. He was born in London in 1866, and died at his house on Guernsey (one of the Channel Islands) in 1946. He seems to have been a writer his whole adult life (though he worked for the Ministry of Information (presumably writing!) during the First World War, and before that he worked in his father's leather business, one assumes until he made enough money from writing to quit). His first novel appeared in 1887, and he published over 100. His life seems, from the Wikipedia description, to have been fairly uneventful, and probably fairly happy. He married Elise Hopkins in 1892, they had one daughter, and a yacht and a French villa as well as the house on Guernsey. 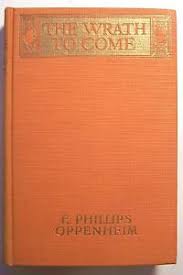 The Wrath to Come opens in Monte Carlo. Young American Grant Slattery unexpectedly runs across Gertrude, once his fiancee, who had jilted him to become instead the Princess von Diss. They discuss things somewhat awkwardly -- Grant assures her he has no hard feelings -- she wonders why he quit the Diplomatic Service (he came into money) -- and they make a date for lunch. Conversation turns to the Germans, Gertrude's adopted countrymen, and their carefully cultivated new image of moderation.

Grant's next encounter is with Susan Yeovil, daughter of the English Prime Minister, Lord Yeovil, and Lord Yeovil's Private Secretary. And it comes clear that there is a conference going on, at Nice, where the Germans and Russians are trying to arrange ways around the worldwide limitations on tonnage of warships, due to a treaty that the US only is not a signatory to. It's also clear that Grant is not quite so much out of the Diplomacy business as it seems ... and that he and Lord Yeovil share a belief in the "special relationship" between the US and the UK, and a belief that the US must join the treaty to allow for true worldwide peace. They also discuss the Japanese minister Baron Naga. And, then, suddenly, Naga, whom they believe honorable, is found dead.

Well, it's easy to see where this is going -- the Conference is being subverted, as Germany, Japan, and Russia wish to rearm and dominate the world. Grant and Lord Yeovil must deal with the evil German Cornelius Blunn, and the evil Japanese Count Itash (described in quite odiously racist terms), as well as the intrigues of a couple of women -- a slinky dancer, and Grant's ex-fiancee Gertrude. (But of course we know from the start the Susan Yeovil is the right woman for him!) Will the Americans and the British prevail? What do you think? The novel spends time in London and New York as well as Monte Carlo, and there is a twist or two, and some mild action. It's not a great work at all, and to my mind not as good as The Great Impersonation, but if you can look away from the classism, and the racism, it's modestly entertaining. And, it did predict World War II in a sense, 15 years in advance! (Though the German political scene portrayed has no one remotely like Hitler.)