Birthday Review: A Princess of Roumania, by Paul Park

Birthday Review: A Princess of Roumania, by Paul Park

Paul Park turns 64 today, and in honor of his birthday, I'm posting this review I did back in 2005 on SFF Net. As it happens, I reviewed the second and third volumes of the series this novel starts for SF Site. Not the last, though. 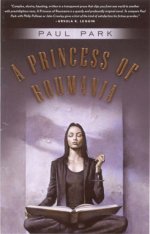 Paul Park's A Princess of Roumania, from 2005, is the beginning of his tetralogy also called A Princess of Roumania. In a way this seems a departure for Park, previously the writer of an audacious SF trilogy, The Starbridge Chronicles; a difficult SF novel, Coelestis, and two very religiously-focussed historical novels, The Gospel of Corax and Three Marys. None of these books (with the arguable exception of his first trilogy) were terribly commercial. Indeed, none were fantasies, though they are hardly traditional SF, nor traditional historical fiction. By contrast A Princess of Roumania is certainly fantasy, and arguably Young Adult fantasy (the Washington Post compares it (not terribly sensibly) to Harry Potter and Oz); and on the whole I would say it has more commercial potential than his previous books. But in so saying I do not mean to say it is less ambitious than his earlier works, or less imaginative -- indeed, it is a very fine novel, and promises to open a fascinating series.

Miranda Popescu is a 15 year old girl in a college town in upstate New York in about the present day. She was adopted from Romania in the chaos following the uprising against Ceausescu. As the novel opens she befriends a lonely one-armed boy, Peter Gross. Her other special friend is a popular girl named Andromeda. Soon they meet a sinister group of teenagers who have just moved to their town, and suddenly their school is set afire, risking Miranda's special keepsakes from Romania: some coins and jewelry, and in particular a remarkable book called The Essential History, which describes world history from an unusual viewpoint.

In a completely different world we meet the Baroness Nicola Ceausescu, formerly a prostitute then a successful actress and dancer, who became the second wife of a much older man. This man was involved in an intrigue which led to the execution of Miranda's father, the exile of her mother to Germany, and the financial ruin of her Aunt, Princess Aegypta Schenk von Schenk, half-German and half a descendant of the White Tyger, Miranda Brancoveanu, who saved Roumania centuries before.

It seems to be Aegypta's hope that Miranda Popescu is the new White Tyger, who will save Roumania from her corrupt current Empress, and from the threat of German invasion. Both Aegypta and Nicola are sorceresses, and Aegypta, we soon gather, has created an artificial world, our world, in which she has hidden Miranda, as well as two loyal retainers, who have been incarnated as Peter and Andromeda.

Nicola has managed to send some people to that world, to find Miranda and bring her back -- both realize that if she is the new White Tyger, control of this teenager will be critical. Nicola, furthermore, is intriguing with a German envoy, thus betraying both her nominal political ally, the Empress, and of course her longtime enemy, the Princess Aegypta.

Nicola's schemes succeed in a limited manner, and Miranda, Peter, and Andromeda all end up in the "real world": our world, and its creating book, having been destroyed. (Apparently.) But they are marooned in the wilds of America, inhabited mainly by savage refugees from earthquake-shattered England. Nicola, however, loses control of her plans, and is forced to turn against her erstwhile German friends, though she does come into possession of a powerful gem, Kepler's Eye, a tourmaline. (It is surely significant that volume II of the series is called The Tourmaline.) She finds herself accused of a murder she didn't commit, while racked with guilt over a murder she did commit. Miranda, in dream contact with Aegypta, a woman she doesn't know, struggles to make her way with Peter, Andromeda, and an obsessed tool of Nicola's, Major Raevsky, to Albany and eventually to a ship to Roumania. Or, she hopes, perhaps back to "our" world. The German Elector of Ratisbon, an illegal sorcerer himself, is trying to find Miranda, and also the tourmaline.

It's a thoroughly interesting novel. In particular, the characters of the villains are wonderfully realized, especially Nicola Ceausescu, who is a certainly a bad person, but at the same time a person with whom we sympathize: and someone who is sometimes on the "right" side. The magical parts are very original, believable (in context), and impressive. There is no real resolution -- this is after all the first of a tetralogy. But I'll be eagerly reading on.
Posted by Rich Horton at 7:27 PM