Wallace Stevens was born on October 2, 1979. So, in slightly belated recognition of his birthday, I'm resposting something I wrote for my SFF Net newsgroup a long time ago. I'll caveat by noting that I really don't discuss individual poems in any detail here; and my suggesting that some of the things I wrote are kind of questionable. (Like the bit about him being known in two separate ways.)

I've mentioned before that Wallace Stevens is my favorite poet. (It's possible that I've used qualifiers like "20th Century" and "American" but hang all that, he's my favorite bar none.) Over the past couple of months, I've been engaged in a project, at first sort of offhand, by the end obsessive, of rereading his Collected Poems. And, by the end, of reading his late long poems repeatedly and with particular care. 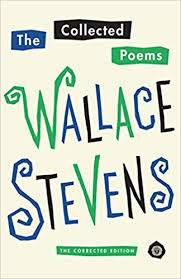 Stevens is known, it seems to me, in two separate ways. In the popular sense, he is known for a series of remarkable early poems, in most cases not terribly long, notable for striking images and quite beautiful prosody. Of these poems the most famous is surely "Sunday Morning" -- other examples are "Thirteen Ways of Looking at a Blackbird", "Peter Quince at the Clavier", "Sea Surface Full of Clouds", "Tea at the Palaz of Hoon", "The Emperor of Ice Cream", "The Idea of Order at Key West", "Of Modern Poetry". The great bulk of these come from his first collection, Harmonium, and indeed from the first edition of Harmonium, published in 1923. ("Sea Surface" is from the 1931 reissue and expansion of Harmonium, "The Idea of Order at Key West" is from Ideas of Order (1936), and "Of Modern Poetry" is from Parts of a World (1942).) These were certainly my favorite among his poems. And they remain favorites.

But his critical reputation rests strikingly on a completely different set of poems, all later than those mentioned above. (Though it must be acknowledged that at least "Sunday Morning" and "The Idea of Order at Key West" as well as two early long poems, "The Comedian as the Letter C" and "The Monocle de Mon Oncle", are in general highly regarded critically. And that most of his early work is certainly treated with respect.) The longest poem in his Collected Poems is probably the poem with the greatest critical regard, "Notes Toward a Supreme Fiction". [Actually, ranking Stevens' poems by "critical regard" is a fools' effort, and I don't think there is any such consensus any more.] This was published as a separate book in 1942, the same year as Parts of a World. ("Notes" isn't actually his longest poem: a controversial poem called "Owl's Clover" was published in two separate forms, both longer than "Notes", but then was basically repudiated by being excluded from the Collected Poems.)

I think it's fair to say that "late Stevens" begins with "Notes", while "early-to-middle Stevens" ends with Parts of a World. ("Notes Toward a Supreme Fiction" was reprinted as part of his 1947 collection Transport to Summer.) Of course the terms "late" and "early" are odd applied to Stevens. His first successful poems appeared in 1915 (including "Sunday Morning"), when he was 36. He was 44 when the first edition of Harmonium came out. That's pretty late for "early"! And by the 1942 publication of "Notes Toward a Supreme Fiction" he was 63. Indeed, his production from 1942 through his death in 1955 was remarkable: two major collections each with several long poems (Transport to Summer and The Auroras of Autumn), as well as at least another full collection worth of late poems, some included in the 1954 Collected Poems in a section called "The Rock", and quite a few more not collected until after his death. The other late long poems besides "Notes Toward a Supreme Fiction" that attract considerable praise are "Esthétique du Mal" (though this tends also to be disparaged), "Chocorua to its Neighbor", "Credences of Summer", "The Auroras of Autumn", "The Owl in the Sarcophagus", "Things of August", and "An Ordinary Evening in New Haven".

I can only say that my rereading of his poems was remarkably rewarding. Really! (That last "re" was on purpose!) The early favorites remain special -- I dare say I've read "Sunday Morning" hundreds of times, and it seems new every time. "The Idea of Order at Key West" is another long-term favorite. And I was delighted to detect a prefiguring of "The Idea of Order at Key West" in one of my favorite brief poems, "Tea at the Palaz of Hoon". (I knew I couldn't be the only person to have noticed that, and indeed Harold Bloom goes on at some length about the links between the two poems in his book on Stevens.) But the truly eye-opening aspect of this rediscovery was the late long poems. Well, indeed, all the long poems. The early "Comedian" and "Monocle" had never really caught fire for me in earlier readings, but this time they did. I'm still not a huge fan of the popular middle-period long poem "The Man With the Blue Guitar", but I did enjoy this reading. I have long enjoyed a fairly long poem from Parts of a World, "Extracts from Addresses to the Academy of Fine Ideas" -- and I was delighted to see that Harold Bloom also likes that poem. I had earlier approached "Notes Toward a Supreme Fiction" with what I can only call trepidation. But on these recent rereadings (four or five careful ones) the poem -- still difficult -- has opened up to me. So too with "The Auroras of Autumn" and the late lovely "pre-elegy" for George Santayana, "To An Old Philosopher in Rome". "Credences of Summer" and "An Ordinary Evening in New Haven" don't yet come clear to me, but reading them is still a pleasure. (I say "come clear" as if I fully understand "Notes Toward a Supreme Fiction"! Not likely, but I am sure that each future rereading will show me new things.)

[I should note that on further rereadings, "Credences of Summer" and "To an Old Philosopher in Rome", in particular, have become more important to me.]

What to say about late Stevens? The most obvious adjective is "austere". But that doesn't always apply -- he could also be quite playful. However, there is never the lushness of a "Sunday Morning" or "Sea Surface Full of Clouds" in the late works. The sentences tend to extraordinary length, but the internal rhythms are involving. The poems are all quite philosophical, much concerned with the importance of poetry, the nature of reality versus perceptions of reality, and, perhaps more simply, with growing old. (A Stevens theme, to be sure, that can be traced at least back to "The Monocle de Mon Oncle".)

I also took the time to read two book length studies of Stevens. These are Helen Hennessy Vendler's On Extended Wings: Wallace Stevens' Longer Poems, and Harold Bloom's Wallace Stevens: The Poems of Our Climate. Both are interesting and worthwhile, but also difficult, particularly the Bloom. I think I just don't have the vocabulary or training to always understand Bloom.

(It's interesting to consider the definition of "long poem". By my count there are 18 poems of more than 100 lines in the Collected Poems, and two more ("Owl's Clover" and "The Sail of Ulysses") in Opus Posthumous. But Vendler only explicitly covers 14 poems, including one quite short poem ("Thirteen Ways of Looking at a Blackbird", 54 lines). She leaves out one of my favorite longer poems, "Extracts From Address to the Academy of Fine Ideas", and other perhaps less important poems like "Things of August", "The Owl in the Sarcophagus", "Chocorua to its Neighbor" and "A Primitive Like an Orb". But that is just to quibble.)
Posted by Rich Horton at 8:56 PM