Here's a selection of a number of my past reviews of Ted Chiang's work. This is a bit different than some of my previous selections -- a lot of this stuff is not from my Locus column, partly because some of it predates my writing that column. I've organized it a bit strangely -- it begins with a review I did for my SFF Net newsgroup of his seminal first collection, and follows with individual reviews of a couple of those stories, then continues with later reviews of his later work (these mostly from the Locus column). 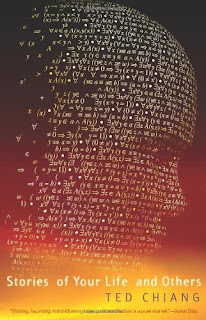 Ted Chiang's Stories of Your Life and Others collects all his fiction to date, including one new story. Again, it's an excellent collection. I reread the earlier stories for the first time in a long time -- I was particularly impressed on rereading by "Tower of Babylon", which posits a cosmology in which a Tower of Babel could actually be successfully built. I admit I didn't quite get "Division by Zero", about a woman mathematician driven to despair when she proves that arithmetic is inconsistent. "Understand" is a nice, dark, story about a man who becomes a superman when he undergoes an experimental brain treatment -- and what happens when he finds another. Of the later stories, "Story of Your Life" remains my favorite, both very very moving and mind-blowing as well, told in second person successfully (and for good reason). As I wrote in my review of Starlight 2: "It's an amazing story, about a linguist who is part of the contact team with aliens visiting Earth. She learns their language, and in Sapir-Whorfian fashion, sort of, she finds her perception of time altered by the alien perception of time. This is interweaved with her reminiscences of segments of the life of her daughter, who died in early adulthood. Chiang combines wonderful linguistic speculation with a real portrayal of truly alien aliens (alien for good reason!) with nice scientific underpinnings, with the affecting and effective story of the linguist and her daughter, and makes it all work as a thematically unified whole. It accomplishes the rare feat of combining an interesting bit of SFnal speculation, worth a story on its own merits, with a moving human story, and using the SF ideas to really drive home the human themes. While at the same time maintaining interest as pure SF. I'm fond of saying that there are two types of SF: stories about the science, and stories which use the science to be about people. This is both types in one." "Seventy-Two Letters" has a great central idea, and it does some nice things working out the implications, but the story itself is resolved with too much actiony hugger-mugger. "Hell is the Absence of God" again has a neat central conceit, and is uncompromising in working it out -- but I admit I was confused by the ending. His Nature short-short is a nice speculation on the future of science in a "post-human" world. And the new story, "Liking What You See", as Rachel Brown says quite reminiscent (both in central idea and form) of Raphael Carter's "Congenital Agenesis of Gender Ideation", again takes a neat idea, the development of a means of making people unable to perceive human beauty, and extrapolates the consequences wonderfully. (I did think he cooked his argument a bit by having all the "opponents" of the side he seemed to favor being basically evil.)

Of these I recommend the novella from Starlight 2, "Story of Your Life" by Ted Chiang, most highly.  From where I stand just now, having finished this story just 3 hours ago, this is the clear front runner for my top Hugo vote.  It's an amazing story, about a linguist who is part of the contact team with aliens visiting Earth.  She learns their language, and in Sapir-Whorfian fashion, sort of, she finds her perception of time altered by the alien perception of time.  This is interweaved with her reminiscences of segments of the life of her daughter, who died in early adulthood.  Chiang (who's just incredible: only four stories in his career! this the first in several years) combines wonderful linguistic speculation with a real portrayal of truly alien aliens, alien for good reason!, with nice scientific underpinnings, with the affecting and effective story of the linguist and her daughter, and makes it all work as a thematically unified whole.  It's just a wow! story.

The most impressive of the new stories here is the longest, "Seventy-two Letters" by the remarkable Ted Chiang. Chiang, entirely deadpan, sets his story in what seems to be Victorian England, but what turns out to be a very different world. He tells of a man who specializes in designing automata which are controlled by seventy-two letter "names": particular, carefully designed names causing particular actions to be taken. As the story continues, we learn that this world is stranger than we had thought, as other "alchemical" scientific notions appear to be true. I won't reveal any of the story's secrets: suffice it to say that it turns out to fit the anthology's theme, and that it is continually intriguing and audacious. It does present a rather cold affect, though, failing to engage this reader on the emotional level in the way that, for example, Chiang's wonderful "Story of Your Life" did.

Ted Chiang is back, with "Hell is the Absence of God", a rather intriguing and deadpan look at a world much like our own in which the existence of Heaven and Hell are objectively proven: indeed, the souls in Hell can be seen, and in which angels occasionally come to Earth, typically causing a mixture of miraculous events and capricious disasters.  The story focuses on an unpious man whose beloved wife is killed and ascends to Heaven in one such angelic visitation, and who tries to find a way to love God and thus reach Heaven to rejoin her, against all his instincts.

One of the most ballyhooed new collections in 2002 is Ted Chiang's Story of Your Life and Others. The ballyhoo is fully justified -- this collection, of all his published stories to date, is full of exciting stuff. There is one new story, "Liking What You See: A Documentary". Chiang postulates a brain modification called "calliagnosia", which disables one's ability to perceive beauty in human faces. He follows the debate over an initiative at one Pembleton University which would require all students to have the treatment, on the grounds that it would eliminated "lookism" among the student body. He stacks his argument somewhat by making the opponents all obvious bad guys, but the examination of the social effects we might see from such a treatment, as well as related aspects such as the use of sort of the reverse effect in advertising, in fascinating. It's a very thought-provoking piece. (Incidentally I was reminded of Raphael Carter's Tiptree Award winner "Congenital Agenesis of Gender Ideation"). It's not Chiang's best story, but it's still a must read.

In September F&SF features a highly anticipated cover story, the first substantial Ted Chiang story in several years, "The Merchant and the Alchemist’s Gate".  (This story is also available in book form from Subterranean Press.) It does not disappoint. It is set in Baghdad perhaps a millennium ago. A merchant tells the Caliph his strange story: how he encountered an alchemist with an unusual device: a gate to the past. (Interestingly, this gate is described in science-fictional terms, though it could as easily have been pictured fantastically: as a magical tapestry, perhaps. But I think Chiang’s choice -- purely aesthetic, it is not central to the story -- works very well.)  We hear three tales within the tale, about people who used the gate, to travel decades into the past, and how some were greatly helped, and others harmed. The stories intertwine very neatly, and of course they merchant himself will likewise use the gate, with ambiguous but moving results.

Ted Chiang is back -- we knew that already, what with last year’s spectacular Hugo winner "The Merchant and the Alchemist’s Gate". "Exhalation" is quite as spectacular, and completely different. It depicts a quite unusual artificial world, apparently completely made of metal, whose inhabitants are likewise metal, and who breathe air supplied by replaceable lungs. It is told by one of these people, who discovers how their brains work, as it becomes clear that the supply of air is diminishing. The setup seems to imply some history that other writers might have exploited -- is this a society of robots after humans have left, perhaps? -- but Chiang’s interests are elsewhere, and the story explores deeper philosophical questions, and comes to a very moving conclusion. To make the obvious pun -- it took my breath away.

"The Truth of Fact, the Truth of Feeling", by Ted Chiang, at the Fall Subterranean, is Chiang working out the personal and social consequences of a new technology, called Remem. This works with "lifelogs" ("personal cams that capture continuous video of their entire lives"), to allow instant retrieval of the video of some past event you might be thinking of. The story is told by a journalist who is skeptical of the new tech, and who is particularly worried that replacing ones mediated (and perhaps "softened") memories of past disputes with loved ones might be harmful. The journalist's investigations are interleaved with accounts of an historical example of a new "memory technology" being introduced -- in this case the introduction of writing by Europeans to Tivland (now part of Nigeria). The parallels are interesting -- both stories are interesting, and the journalist's story is particularly affecting (dealing with his strained relationship with his daughter) -- this is strong and very thoughtful SF, only perhaps slightly disappointing in comparison with some of Chiang's own work in that there is no real gosh wow sense of wonder -- but that's hardly fair.

We lead off this month with three very strong novella chapbooks. First is the eagerly anticipated new Ted Chiang story, The Lifecycle of Software Objects, published in a very attractive edition by Subterranean Press, with cute and illuminating illustrations by Christian Pearce. This novella does not quite have the awesome zing of some of Chiang’s work -- the overwhelming sense of wonder he can induce. But it works very well as a rigorous examination of the ramifications of creating artificial life. The story concerns the invention of what are first intended as sort of virtual pets, with extra intelligence, in a virtual world. These software creatures -- called "digients" -- are "raised" by humans, and inevitably develop their own personalities, leading of course to questions of AI rights, autonomy, etc. There are digients who resemble animals, and some who resemble robots -- allowing the story to resonate not only with questions of AI or robot rights, but with those about animal rights as well (and for that matter questions about the rights of children to autonomy). These are traditional SF questions, which may be why the story doesn’t awe like some of Chiang’s work. But Chiang’s examination of these questions is thorough, sensitive, and thought-provoking. His main characters are two people, Ana Alvarado and Derek Brooks, who work for the first company to design these digients. These two adopt some of the digients, and become key figures in the eventual drive to provide them what we might call a good home. Such issues as what happens when the computers the digients "inhabit" become obsolete, or what does it mean for an AI to be "happy" when their happiness is an initially purely programmed behavior, or what rights does an AI have concerning suspension and restarting, or resetting to a previous state, and many more, are examined -- and not dryly, but in the context of an involving story.
Posted by Rich Horton at 9:11 AM