I don't know for sure if this was a "bestseller" -- there were no true bestseller lists in Maria Edgeworth's time. But she was very popular, for realistic contemporary novels like Belinda and Ormond, for children's works, and for satirical works like Castle Rackrent. She was very famous, made a lot of money (more, Wikipedia says, than Jane Austen), was politically influential, and was friends with the likes of Walter Scott and Kitty Pakenham (the Duke of Wellington's wife, and a collateral ancestress of Anthony Powell's wife and thus of the Longfords).

Maria Edgeworth was born in 1768, to an Anglo-Irish father and an English mother. She lived in England until 5, moved to Ireland after he mother's death and her father's remarriage, and later returned to England, but spent much of her life in Ireland (apparently socially much present in both countries). In fact, her political views were much formed by the question of Union between England and Ireland, which she and her father supported, but with doubts because they were well aware how many Irishmen opposed it. Her father, Richard, was a progressive educator, and indeed Maria's first couple of publications were on the subject of education. Richard married 4 times (the second and third being sisters), and had 22 (!) children -- one wag remarked that he had plenty of subjects on whom to try his progressive education theories.

Castle Rackrent was Edgeworth's first "novel", though it is very short -- the main narrative is about 25,000 words, and there are another 7500 or so words of an introduction and a glossary. It was published in 1800. It is sometimes considered the first historical novel, and the first novel to use an unreliable narrator. My edition is the Dover edition. 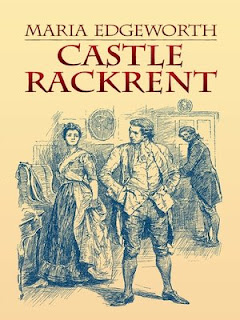 It is told by one Thady Quirk, who was the steward for four generations of the Rackrent family, who inherited Castle Rackrent from a distant cousin. Thady sings the praises of each of his masters ... Sir Patrick, Sir Murtagh, Sir Kit, and Sir Condy. But we quickly gather that each of them are fairly awful people. Sir Patrick is a spendthrift, and quickly gets into disastrous debt, and then dies. Sir Murtagh is by contrast a miser, and his wife is if anything worse, and his main entertainment is lawsuits against his neighbors. Sir Kit, Murtagh's younger brother, inherits and decides to marry a rich Jewish woman to save the estate, but she won't part with her jewels, and he locks her up for several years in revenge. His gambling and foolishness gets the estate into further trouble -- though Thady's son Jason profits by buying up Rackrent property on the cheap. Finally, Sir Condy has more woman trouble -- throwing over his mistress (Thady's niece) in favor of a rich local woman, whose family hates the Rackrents and thus refuses to give her any dowry. That marriage thus quickly founders, and Condy, after a foolish venture into Parliament, ends up literally drinking himself to death on a bet. And thus ends the Rackrent line.

It's all much more elaborately told of course, in very long paragraphs in Thady's quite plausible sounding Irish voice. There are extensive humorous asides about Irish habits -- these seem at times satirical, and at other times straightforward narrations of real Irish traditions and behaviors (all this much enlarged upon in the Glossary, which is written not in Thady's voice but in that of his "Editor"). As already noted, Thady is an unreliable narrator, and he constantly proclaims his loyalty to and love for the Rackrents, while we can't help but notice that his real interest is in the main chance -- and that in the end one of the primary beneficiaries of the misfortune of the Rackrents is Thady's son.

It's often very funny, though the long paragraphs do drag a bit. And as all the characters are really quite awful people, the novel wears out its welcome fairly quickly -- but as it's very short, that's OK -- it's about as much as we can stand, and pretty entertaining for its length.
Posted by Rich Horton at 5:44 PM