OK, I don't think this novel was a bestseller, but it was a success, the biggest success of its writer's career. (She died at age 67 a year or so after it appeared.) Anna Kavan was the name adopted by the British writer born Helen Woods in 1901. She was born in Cannes (to British parents), grew up traveling constantly in Europe and the US until her father's suicide in 1911, after which she returned to England and boarding school. In 1920, unable to go to Oxford, she married Donald Ferguson, and immediately they moved to what was then Burma. She was terribly unhappy there, both with the climate and with her husband. They divorced in 1928, and Helen soon married painter Stuart Edmonds. That marriage dissolved in 1938. Helen began publishing fairly conventional (but fraught) novels in 1929 with A Charmed Circle, using her first married name, Helen Ferguson (even though by then she was married to Edmonds). Five further novels followed through 1937. A character in some of these early novels was named Anna Kavan. In 1939, after her second divorce and her first suicide attempt, she changed her name to Anna Kavan, not just as a pseudonym but legally. (Or so say several sources, including the Encyclopedia of Fantasy, however, the Science Fiction Enyclopedia, online and regularly updated, now states that she never formally changed her name. As she was constantly slippery about her identity, it is difficult to be certain, though I trust the SFE.) Some of the rest of her life was spent in and out of asylums and sanatoria, treating in part her long time heroin addiction, with at least two additional suicide attempts. (Some have suggested her death in 1968 was a suicide, though the official verdict (probably correct) was heart failure, a result in part of her heroin addiction.) She continued to write, in a generally more experimental mode. Ten further books (novels and story collections) appeared in her life, and another half-dozen after her death. She became associated with the nouvelle roman style. Ice (1967) was her last novel (not counting any of the posthumous work). 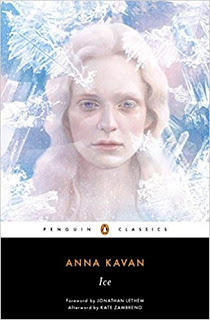 From the beginning Ice has been called science fiction, and that's not unreasonable, though Jonathan Lethem, in the introduction to my edition (a "50th Anniversary Edition" from Penguin), writes "I doubt it helps for it to be categorized as science fiction, or for it to be categorized at all." Still, it has always had champions in the SF field (I've been meaning to give it a go for decades), and the one writer I am most reminded of is J. G. Ballard. As I suggest above, it was initially a success, but it seems to me that over time it more or less disappeared from wide notice, though it was always on the edges of the conversation in the literary corridors of the SF world. But Kate Zambreno wrote in 2006 (in an essay reprinted as the Afterword to my edition) that "Kavan, every bit the equal of every writer she has been compared to [such as Jean Rhys, who likewise had a late career success, with Wide Sargasso Sea, just a year prior to Ice], has -- regretfully -- vanished." This Penguin reissue is evidence that she's back in sight. 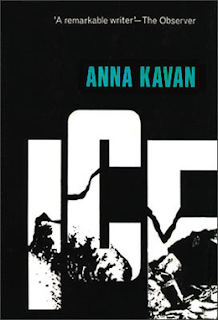 This is really quite a remarkable novel. It is told by an unnamed narrator (all the characters are nameless), who, at the opening, is back home, in a country threatened by impending war, driving to a remote location to find a girl (as she is called throughout) whom he had once wanted to marry. She has married another man, and the narrator, a military man, just wants to see her again. This encounter reveals a marriage in trouble, and the narrator seems to want to rescue her -- and we get flashbacks to an earlier visit shortly after the marriage. So far the novel seems not unconventional, but then there are the sudden irruptions of images of ice walls rushing in, imprisoning the girl and other characters -- but are these just the narrator's madness?

Noticeable too, from the beginning, is the narrator's sexualized and somewhat violent perception of the girl. She is always described as painfully thin, extremely pale (like ice, one might say), very fragile. Often bruised. Male violence, sometimes suggested, sometimes described, seems always near. Really this is all quite uneasy-making.

The book accelerates quickly. Soon the narrator is following the girl as she sails to another country. This country is closer to open war with its neighbors. It is ruled by an autocrat called the Warden, and the narrator learns that the girl is with the Warden. He plots to meet the Warden, and to arrange to see the girl, with scary and strange results. All through this narrative there are further descriptions of the coming ice, and strange interludes that seem real as they happen but then are forgotten -- riots, violence, the girl dead on multiple occasions.

It's not a long novel (a bit shy of 50,000 words, I'd say), and it moves, as I said, at great velocity. The writing is clipped and vicious. The rhythms are pounding. The images are striking and scary. There is from the beginning no way out but death for everyone.

One of the obvious interpretations suggested is that the images of Ice refer to heroin. That's perhaps too obvious, but it does make some sense. But at the same time the objectification of the girl as fragile and subject to violence resonates horribly with so much of what we see about the way many men treat women -- and the girl in this novel is treated as a child subject to discipline by all the men she is with (her husband, the narrator, and the Warden) -- though much of her attitude is laid at the door of her mother. (Kavan apparently had a difficult relationship with her mother.) So there's that. And, too, there is the shadow of a coming apocalypse, and of course the end of the world was an abiding concern of people in the '60s. As with almost any such novel, open to multiple readings, it seems worth it just to take the novel first on its own terms, and let it take on as many meanings as it suggests.

I'll leave with a few questions about Ice:

1. The 'girl" is described in strikingly fragile terms -- constant reference is made to her thinness, the way her bones stick out, her extremely pale skin and white hair. (And of course calling her a "girl" and not a woman is in itself an infantilization, and an emphasis on fragility.) Some of this is clearly a reference to "ice", but much of it suggests that the men in her life see her sexuality as bound up in violence -- explicit sadism in the case of the warden, slightly sublimated sadism in the case of the narrator, marital frustration that perhaps has led to physical abuse in the case of her husband. To what extent is this novel about male violence towards women, and about the male gaze infantilizing women, or subordinating women?

2. The apocalyptic event that drives the overall shape of the novel seems to be encroaching walls of ice. As first presented, the walls of ice seem hallucinations, but as things continue, it does seem that the action converges on the tropics, as ice consumes more and more of the world. Is this real? Or is this simply what the narrator perceives as his internal life is changed?

3. What world is this novel set on? The opening appeared to me to possibly be set in England, but as things continue, any Earthbound setting seems more and more unlikely, though whatever planet this is, it's extremely Earthlike. Does it even make sense to ask where the novel is set?