I wrote this review back in 2006 when the book came out. It won the Hugo for Best Novel the following year, though my sense is that it hasn't lasted in the public imagination the way Vinge's other novels have. Today is Vinge's 74th birthday, so I'm reposting it. 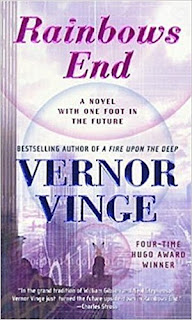 Vernor Vinge is now officially a full-time writer, having retired from his day job as a professor of Computer Science at the University of California at San Diego. So fans hoped his new novel would come more quickly, but in fact it's been 7 years. Oh well, it takes as long as it takes. Rainbows End is certainly worth the wait.

Interestingly, it is set at UCSD, and the main character is a former professor there -- though a poet, not a computer scientist. He is Robert Gu, apparently the leading poet of our time (that would be now). But as of about 20 years from now, he has been in a nursing home for years, with Alzheimer's (or some other form of dementia), and other maladies of old age. But he has been cured -- indeed he has hit the jackpot in the "heavenly minefield" of 21st Century medicine.

Robert's son and daughter-in-law, it turns out, are highly placed individuals on the U.S. side in the Great Powers' continuing war against chaos -- against the possibility of various varieties of WOMD being wielded against the whole world. One other key individual is Alfred Vaz, an Indian intelligence head. He and two of his colleagues from Europe and Japan have uncovered a plot to deliver a "YGBM" virus in a clever fashion. YGBM means "You Gotta Believe Me": that is, mind control. They recruit an helper, who they meet only in virtual space, called the Rabbit, who will assist them in infiltrating the biolabs near UCSD where they suspect the virus is under development. The kicker is that the man behind this project is Vaz himself -- but he, of course, will use this power only for good -- he sees it as the only way to control the bad guys in the world. So he needs to play his colleagues and the Rabbit very carefully. But the Rabbit's abilities in the virtual world are quite remarkable.

Inevitably, Robert Gu, his son and daughter-in-law, and his granddaughter Miri, become enmeshed, without their knowledge, in all this plotting. But the story is only partly about Alfred Vaz's machinations. It's also about Robert coming to terms with his new quasi-youth: his new abilities, such as an interest in electronics, and his terrible losses, such as his ability to write poetry. But he may have lost something else: it seems that in his prior life he was a prime jerk, driving away his wife and all his colleagues with simple nastiness. His son mostly hates him, certainly distrusts him. But has he changed?

All this is SFnally fascinating, very scary. And indeed the novel is interesting in the way that it's not quite clear who the heroes are -- well, no, it is clear: Robert Gu and Juan Orozco and Miri Gu are the heroes. But they have been coopted to work for bad guys. Maybe. Or sort of bad guys. And anyway lots of the story is not about that plotty stuff, but rather about Robert dealing with his new "youth" and his lost poetic talents, and Miri dealing with family issues, and Juan dealing with his own relative poverty and poor education ... in the end, the novel is quite satisfying as a look at pretty believable characters in a somewhat believable alternate future (I can't help but thinking that this future doesn't make sense starting from now, but maybe from 20 years ago ...). And then behind it all lurks a very scary, and only partly resolved, big story about a future balanced between terrorist chaos and even scarier order imposed by mind control. I think this is a surprisingly subtle triumph from one of the field's best pure SF writers.