Walter Jon Williams was born October 15, 1953. In honor of his birthday, I thought I'd repost this review I did of the first of his Dread Empire's Fall novels back in 2003. 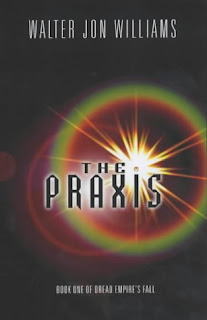 This book is unabashed Space Opera, and I found it extremely fun reading. Every so often the characterization or the plotting seems to fall back on cliché -- and after all the basic setup is pretty familiar, particularly the rehashing of Naval Fiction standard situations. The book is also clearly the first of a series, thus the story doesn't really end -- those factors hold it short of excellence. But it's very good -- neatly conceived, with plenty of gripping action, and with two main characters who are interesting, and flawed in believable ways even while also supremely gifted in fairly standard commercial fiction fashions.

The parts of the Galaxy linked by an extensive wormhole network are ruled, as the story opens, by the long-lived aliens called Shaa. They control several other spacegoing species -- the lizardlike Naxids, humans, the birdlike Lai-Own, the furry Torminel, etc. The basic philosophy of the Shaa is that everything worth knowing is already known. Their governing system, the Praxis, attempts to enforce absolute stability. Machine intelligence, genetic engineering, and certain other technology is forbidden. The ruling style is extremely hierarchical, and superiors have the right to kill inferiors for any reason whatsoever. The subordinate species seem essentially equal to each other, sharing government and military posts, though there seem to be worlds, even sectors, dominated by one or another species.

Now the very last of the Shaa has decided to die. This impacts the future of Lord Gareth Martinez, an up and coming Naval officer. His main patron has been chosen to die along with the Shaa, and Martinez, who is brilliant and rich but handicapped by his family's relatively low, provincial, standing, represented by his vulgar accent, will thus lose a key supporter. But he gains some fame when he coordinates a daring rescue attempt. And the rescue attempt is piloted by Lady Caroline Sula, the only remaining member of a formerly powerful family that has fallen into disgrace. The two are both decorated, and when they meet each other, sparks fly. But Sula has some deep personal issues which make her skittish about relationships. Her backstory is slowly revealed in flashbacks. (These flashbacks were published separately as the novella "Margaux" in the May 2003 Asimov's.)

Martinez ends up posted to a ship run by a football-mad (football = soccer) Captain. Martinez and a few others including his trusty old batman (yes, a cliché) run the ship while the Captain and his various good footballers (who are worthless as naval types) practice. The ship makes its way to a Naxid dominated system, and Martinez notices some very suspicious Naxid behaviour. He concludes correctly that they are planning to take advantage of the power vacuum left by the death of the last Shaa and try to assert their status as the first race conquered by the Shaa and take the Shaa position at the top of the heap. Martinez's perspicacity and his brilliant tactics keep the Naxid operation from being a complete success.

Back on the capitol planet, Zanshaa, the Naxid attempt to take over the ruling Convocation is also foiled, partly by luck, and the other species quickly mobilize for a war. Sula's hopes for a quick promotion are ruined when her lieutenant's exams are interrupted by the rebellion. But this leaves her in position to once again use her piloting skills and become a war hero on her own.

And so come the opening battles of what looks likely to be an extended war. The book ends pretty much on a note of "to be continued". Clearly Martinez and Sula are destined for each other one way or another, though Williams has managed to make their future ambiguous -- Sula's past could come back to haunt her, and Martinez' conceit and overweening ambition could ruin things as well. I'll be eagerly looking forward to future volumes, and I'm sure there will be plenty more space battles, alien political intrigue, and an involving personal pair of stories for our two heroes.
Posted by Rich Horton at 9:36 PM