Birthday Review: The Lights in the Sky Are Stars, by Fredric Brown

Birthday Review: The Lights in the Sky Are Stars, by Fredric Brown

Today would have been Fredric Brown's 112th birthday. In his honor, then, I decided to post a fairly brief review I did a long time ago, for my SFF Net newsgroup, of his novel The Lights in the Sky Are Stars.

Brown (1906-1972) was a well-respected writer in both the SF and Mystery genres, winning one Edgar for his novel The Fabulous Clipjoint. His work was often funny, though often with a serious, even dark, undertone. He was well-known for his very short stories. His best known short story is probably "Arena", which was anthologized in The Science Fiction Hall of Fame, and which is considered a source for the Star Trek episode of the same title. Here's what I wrote back in 1999 (which is also when the novel is set): 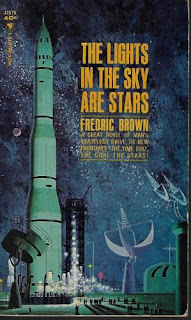 I read an old SF novel I'd been meaning to try for some time, Fredric Brown's The Lights in the Sky Are Stars (1953).  This tells of a spacestruck man in 1999, an aging spaceship mechanic, who becomes involved with a politician and her efforts to reignite America's space program by pushing for the development of a ship to Jupiter.  It's mostly too cheesy and melodramatic to work: we need to put up with the hero breaking into an opposing politician's office to steal the meticulous records detailing his corruption, for instance, and with a tragic death, caused because a ten-day delay in getting the program started was impossible, and with the hero teaching himself spaceship administration in no time, and cutting the cost of the program from a near-prohibitive 300 million dollars (!) to 26 million dollars.  Among other things.  At the end there is another weird twist, almost the most melodramatic of all, which oddly almost works, and allows the novel to close on an effective, quite moving note.  It's still a case of preaching to the choir, though.  And in the final analysis I felt the cheesiness and implausibility of most of the novel doomed it.

By the by there are some neatly typical '50s predictions for 1999: TV remote controls, but those fixed to the living room chairs (!), private helicopters as a common means of travel, and chemical rockets planned to reach the moon by 1969.  (But they switched to atomics and got there by 1965: too bad for Brown's prediction record.)  There's also the odd '50s faith in progress uber alles: the lead character refuses to believe that light speed is a real limit (humanity's beat every other limit it's faced, by gum, it won't let a little thing like the special relativity stop it!), though to be fair that's only his attitude: the novel itself has no relativity-beating.  And there is a curious, somewhat effective, subplot involving a Buddhist vowing to get to the stars via teleportation.