Anne Perry was born on 28 October 1938 in London, as Juliet Hulme, and the family moved to New Zealand when she was young, for her health. In 1953 she and a close friend murdered the friend's mother (to prevent them moving away), giving her a rather uncommonly appopriate background for a writer of murder mysteries. (This was the subject of Peter Jackson's film Heavenly Creatures.) After serving her time, Hulme changed her name to Anne Perry, and moved to England (and for a time to the United States). She became a Mormon, and as I understand it, two of her novels, the fantasies Tathea and Come, Armageddon, are based on Mormon themes. Her first mystery, The Cater Street Hangman, was published in 1979, and somewhat fortuitously, I discovered her work just a couple of years (and books) later.

She has written novels in several series, most prominent two set in Victorian England: the Thomas and Charlotte Pitt books; and the William Monk/Hester Latterly books. She also wrote several novels about World War I, a whole series of short "Christmas" mysteries, and beginning just last year, books featuring the Pitts' son Daniel. I read the Pitt books and the Monk books with enjoyment for quite a while, but eventually I felt the books were beginning to weaken, and gave up. This review, written over 20 years ago, is of one of the Pitt books that (as you will see) disappointed me. I'm reposting it on the occasion of Perry's 80th birthday. 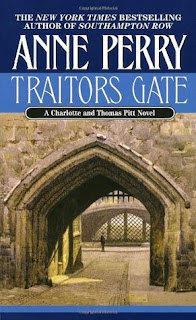 This is the latest in Anne Perry`s long series of mystery novels set in late Victorian England (1890, in the present case.) These novels feature Charlotte and Thomas Pitt, he a policeman (just promoted to Superindent), and she an upper-class woman who married shockingly beneath herself, but who maintains a limited entrée to society, useful in helping Thomas with cases involving crimes among the upper class.

Traitor`s Gate features Thomas much more prominently than Charlotte. Thomas` surrogate father, Sir Arthur Desmond, the owner of the estate for which Thomas` actual father was the gamekeeper, has died in his club in London. The death is ruled accidental, or suicide, but his son Matthew, Thomas` close boyhood friend, is convinced it must have been murder, and asks Thomas to investigate.

Thomas is unable to officially investigate Desmond`s death, but rather fortuitously he is asked to investigate a case of missing information at the Colonial Office, to do with Africa and with British support for Cecil Rhodes. As it turns out, Arthur Desmond, formerly employed in the Foreign Office, had just prior to his death been making "wild" accusations of abuse of power in the government support of Rhodes. Naturally, Desmond`s death and the missing information are linked, and, more importantly, both are linked to the mysterious organization Thomas has run afoul of in previous books, The Inner Circle.

As Pitt`s investigations continue, his own life and Matthew`s are threatened, another murder is committed, and finally Pitt`s discoveries trigger a chain reaction of suicides and murders, ending somewhat in medias res with Pitt apparently ready to openly take on the Inner Circle.

The story is entertaining, and the solutions to the crimes are reasonably clever and interesting. However I don`t rank this as highly as the best books in the series for a few reasons. The Inner Circle has become non-credible to me, in its villainy, and its apparent size and power, not to say the incompetence of such a powerful organization in dealing with such a minor figure as Pitt. Pitt`s solutions to the crimes take on the all-too-familiar form of confronting the criminal with the (rather sparse, by OJ standards) evidence of his wrongdoing, upon which he either confesses or commits suicide. The device of having Pitt assigned to investigate a case of espionage is rather unconvincing. Also, the key crime of the book (the second murder) is not only difficult to credit as far as motive is concerned, but is committed in a foolish manner which seems calculated to ultimately draw attention to the murderer (indeed Thomas is misled rather more than I think he should be).

Finally, a key element of the enjoyment of this series is the ongoing stories of the advancing social life of the continuing characters. The books generally feature a love story or two, and this is no exception, but I didn`t find the love stories very involving. And as I said, Charlotte`s role in this book is minor, which is understandable for this book, but something of a drawback nonetheless.
Posted by Rich Horton at 2:15 PM