I wrote this review way back in 1996, I think for posting at the review forum of one of the very first online bookstores, which name is escaping me now. I'm reposting it today, unchanged, on the 107th anniversary of Brian O'Nolan's birth. 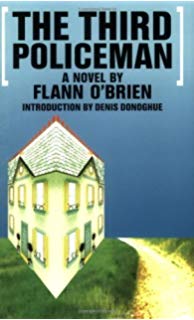 This is one of the strangest novels I have ever read. It was written in about 1940, but not published until 1967, a year or two after the author`s death. O`Brien is a pseudonym for the Irish writer Brian O`Nolan, who was also a celebrated newspaper columnist using the name Myles na gCopaleen, the latter name apparently Gaelic. O`Brien`s masterpiece is At Swim-Two-Birds, which was published in 1939. A selection of his "Myles" columns is also well-regarded. However, The Third Policeman is what I saw in the bookstore when I went looking for something by O`Brien, and it wasn`t a bad choice.

This novel is quite funny, quite absurd, and, at bottom, very disturbing. The narrator is a very unpleasant man, who announces in the first sentence "Not everybody knows how I killed old Phillip Mathers, smashing his jaw in with my spade;" not only is he a murderer, but a very lazy man who ruins his family farm, and spends his life researching the works of a madman named De Selby, who believes that, among other things, darkness is an hallucination, the result of accretions of black air. The narrator relates his early life briefly, leading up to his association with another unsavory character, John Divney, who parasitically moves in with the narrator and helps squander his inheritance. Divney and the narrator plot to kill their neighbor, Phillip Mathers, to steal his money. After the murder they decide to leave the money for a while until the coast clears: however they distrust each other so much that they never leave each others company. Finally they go to Mathers`s house to fetch the strongbox with his money: then Divney sends the narrator ahead to the house alone, while he stands lookout, and things get very strange!

The narrator meets Phillip Mathers, acquires a sort of soul which he calls "Joe", and sets out looking for three mysterious policemen. The first two are easily found, and the narrator discusses bicycles, boxes, and other unusual subjects with these policemen. Finally they decide to hang him (for bicycle theft, I think), but he is rescued by the league of one-legged men (the narrator himself has but one leg). He returns to Mathers` house where he encounters the third policeman, and eventually is reunited with John Divney.

The above summary, obviously, does not represent the action or interest of the book at all. The book is full of off-the-wall philosophical speculations, some based on the mad works of De Selby, others original to the policeman (the latter including a theory about bicycles and their riders which has to be read to be appreciated, also a mysterious trip to an underground cavern where anything you can imagine can be created). There are a lot of footnotes discussing De Selby and the controversy surrounding his work: these make the book somewhat reminiscent of Pale Fire by Vladimir Nabokov (also reminiscent in being the first-person narrative of an insane murderer).
Posted by Rich Horton at 1:45 AM