Peter S. Beagle, SFWA Grand Master, turns 80 today. He became a favorite writer of mine much later than he should have -- about 15 years ago I realized what I'd been missing. Here's my review from back then of perhaps his most famous novel, The Last Unicorn. (It was originally posted at my newsgroup on SFF.Net.) 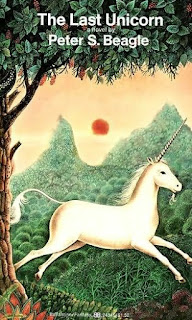 One of my longterm guilty non-reads has been Peter Beagle's The Last Unicorn. I've owned the book for a long time -- indeed, since June of 1977, about when I graduated from high school. (At that time I was sufficiently anal to write my name and the date and the sequential number of the book (among those I had bought -- this was the 279th SF novel!) on the inside.) Somehow I never found time to read it, and I'm not at all sure why. Probably it was reading "Two Hearts", a sequel, last year in F&SF that finally prompted me to dig up my copy.

And my gosh, I'm glad I did. It's a remarkable, beautiful, book. The prose is lovely, the story very moving, the characters involving -- the plot, well, probably just OK but that's not at all the point.

The story is about, no surprise, the last unicorn in the world. As the story opens she is brought to a vague realization that there are no other unicorns anymore, as far as anyone knows. She ends up deciding to search for her fellows, and soon gathers that they were taken away by the agency of the nasty King Haggard, and his mysterious creature the Red Bull. She is captured by a witch running a traveling animal exhibit, but she escapes with the help of a rather incompetent magician named Schmendrick. Schmendrick is tormented by his inability to control his magic in any way, and usually his inability to do any real magic. The two begin to follow Haggard's trail, but Shmendrick is captured by the outlaw Captain Cully, who imagines himself Robin Hood but doesn't quite manage it. Shmendrick escapes, of course, accompanied now also by Molly Grue, a rather faded and beaten down version of Maid Marian who had been cooking for Cully's band for years. And the three make their way to Haggard's strange castle, and to the neighboring town, cursed by prosperity.

At the castle the unicorn encounters the Red Bull, and is unable to deal with it -- and Shmendrick saves her, but by the terrible means of making her a human woman. Admitted to Haggard's haggard castle, they meet his amiable son, and of course the son falls for the unicorn in her womanly form. And eventually she begins to fall for him, once he understands that what she wants is not heroic quests and the heads of dragons and ogres. The shape of the story is clear, and the only resolution -- for Haggard to be deposed and the unicorns freed the Red Bull must be vanquished, and that vanquishing will require a certain sacrifice.

As I said, it's quite wonderful. In particular the first few chapters are astonishingly beautiful: some of the most intense prose I've ever read -- yet always undercut by odd humor and something akin to cynicism but not quite that. These abrupt shifts in tone work startlingly well. Beagle can't really maintain that level, though he reaches such heights again when needed, particularly at the climax. It's one of the field's treasures, no doubt, and I'm glad I finally read it.
Posted by Rich Horton at 6:46 AM